What I’ve learned from self-isolating with Nintendo Switch

I haven't played seriously since high school, but lately I've been spending some serious time with my Switch. COVID-19 has turned me into a video game fan 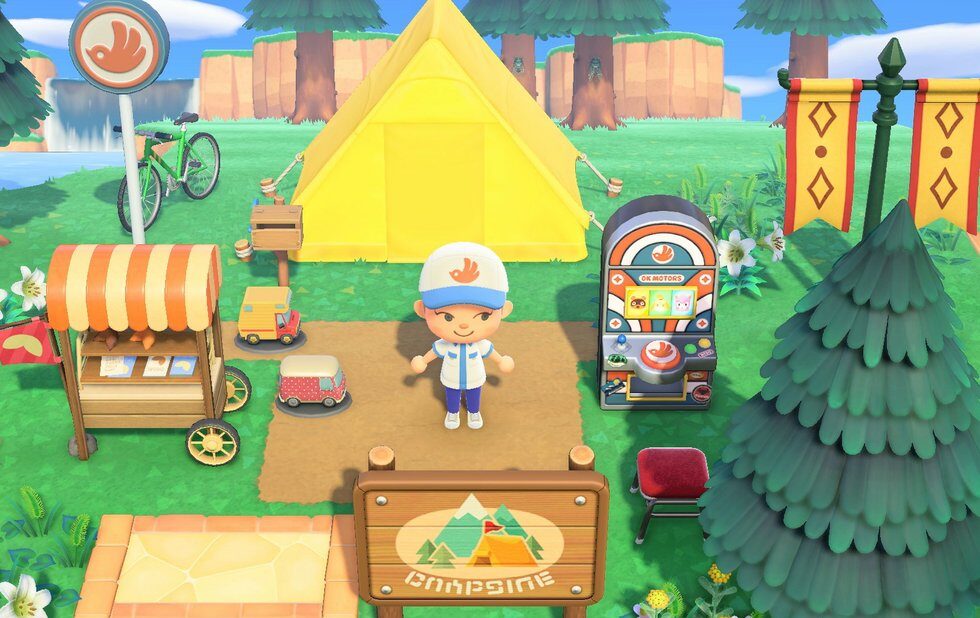 The last time I played this much Nintendo, I was still in high school. I would go straight from Grade 11 classes to Caleigh’s basement (she’s been my best friend since I was four and we’ve played a lot of Nintendo in that basement), microwave some nachos, fire up her GameCube, and load up one of those little game disks, either Mario Kart Double Dash or NHL 2003. Then, to the sounds of Jimmy Eat World, Trapt and Default we’d spend hours upon hours dropping banana peels and doing slow-motion dekes, inflicting lifelong thumb damage in the process.

Since then, video games and I have grown apart. Aside from the occasional Goldeneye 007 tournament on the old Nintendo 64 in my university dorm’s common room, I’ve had other interests to keep me busy in the last 15 years or so. The thought of spending 30 or 40 hours playing a game like The Legend Of Zelda: Ocarina Of Time just seems impossible. What adult has that many free hours?

Well, now I have nothing but free hours. In the age of COVID-19, most of us do.

So I fired up Nintendo’s current console, the Nintendo Switch, and I’m not alone – it’s sold out all across Canada. A lot of that has to do with Animal Crossing: New Horizons, the closest thing I think I’ve seen to a major video game that has gone viral (sidenote: we should retire that phrase for awhile). That’s one of the games the folks at Nintendo Switch sent me to try out, along with Splatoon 2 and Ring Fit Adventure, plus Mario Kart 8 Deluxe, which I bought the last time that same old friend, Caleigh, came to visit from Calgary.

I’ve been spending some major time with those games over the past few physically distant weeks. Here’s what I’ve learned.

My partner has a 13-year-old brother who spends most of his time playing Nintendo (the rest of the time he watches other people playing Nintendo on YouTube). When I first asked him what games he’s into, his answers surprised me. Pokémon, Mario Party, Super Smash Brothers, Mario Kart, the side-scrolling throwback Super Mario Maker – these are basically the same games I was into when I was his age.

Who knew the mustachioed plumber dodging Donkey Kong’s barrels in 1981 would still be a favourite of kids today? Nintendo has a great grasp on its own legacy. Mario Kart 8 is filled with classic Mario characters, including esoteric side characters like Dry Bones and Lemmy Koopa. Wario and Waluigi, who once seemed like lazy evil versions of their heroic counterparts, have developed full, meme-able personalities of their own. And Smash Brothers is basically a greatest hits of Nintendo characters, big and small.

Even Animal Crossing goes way back to the early 2000s, though somehow I never heard of it until a few weeks ago. Speaking of which… 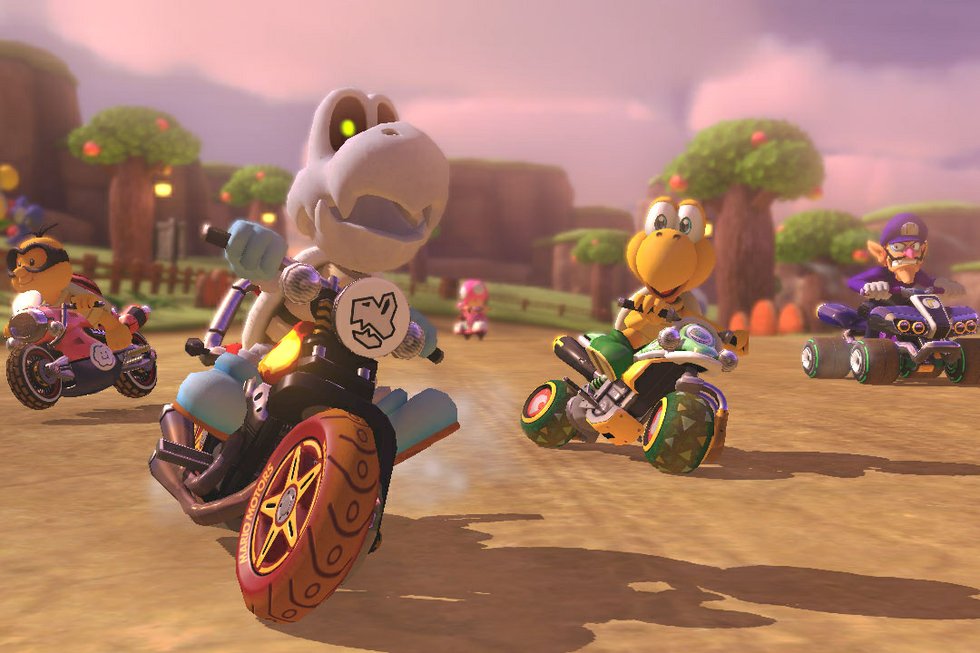 Like everyone else on your Twitter feed, I’m low-key addicted to the new Animal Crossing. But it took me awhile to figure it out. After about a half-hour of styling my cutesy big-headed avatar and sitting through all the preamble from the various characters introducing me to the concept of the game: I’ve decided to move to a desert island and I’ve paid a company called Nook Inc. to set it up for me. Now it’s up to me to build a house, plant some trees, contribute to the local economy by helping set up a museum, build a shop, buy and sell turnips, go fishing and hit rocks with an axe to see what comes out.

There’s no princess to save, no enemy to defeat. But just because it’s super low-stakes and open-ended doesn’t mean it’s not totally addictive. It reminds me of the heightened monotony of The Sims or the between-action parts of Zelda where you just wander around the various villages and talk to townspeople, doing little mini-missions like chasing after chickens. I don’t mean that in a bad way. There’s an almost ASMR quality to it, with calming music and sound effects and little repetitions that soak into your psyche. Now I go fishing in my sleep.

Compared to Xbox or Playstation, Nintendo is sometimes written off as the console for children. And yeah, I sometimes feel that. Splatoon 2 is a first-person shooter, but it’s really a paintball game – one where you can turn into a squid creature and swim in the paint. You play against other online users and you can see the little drawings they’ve made to personalize themselves. A good percentage of them are about how much the other kids hate going to online school. And then I can’t help but remember I’m a 33-year-old man throwing virtual grenades at them.

But the kinder, softer image is kind of endearing, and it hits the nostalgia trigger pretty hard. There’s no more pixelated N64 faces that were once considered the pinnacle of graphics, but there’s still the cutesy big-head/big-feature character design, especially in Animal Crossing where the characters are know-it-all owls and bench-pressing penguins.

The gently offbeat, self-aware sense of humour is still front and centre too. Tom Nook, the tanuki who runs residential services on the Animal Crossing island, is basically a capitalist slumlord who talks about the idyllic scenery while instructing you to take out predatory housing loans and stimulate the local economy by spending “bells.” In Ring Fit Adventure, the main characters are a pep-talking genie, a gym rat dragon who never stops flexing and his anthropomorphic weights. Every time someone makes a pun I can picture the dog from Duck Hunt having a chuckle. 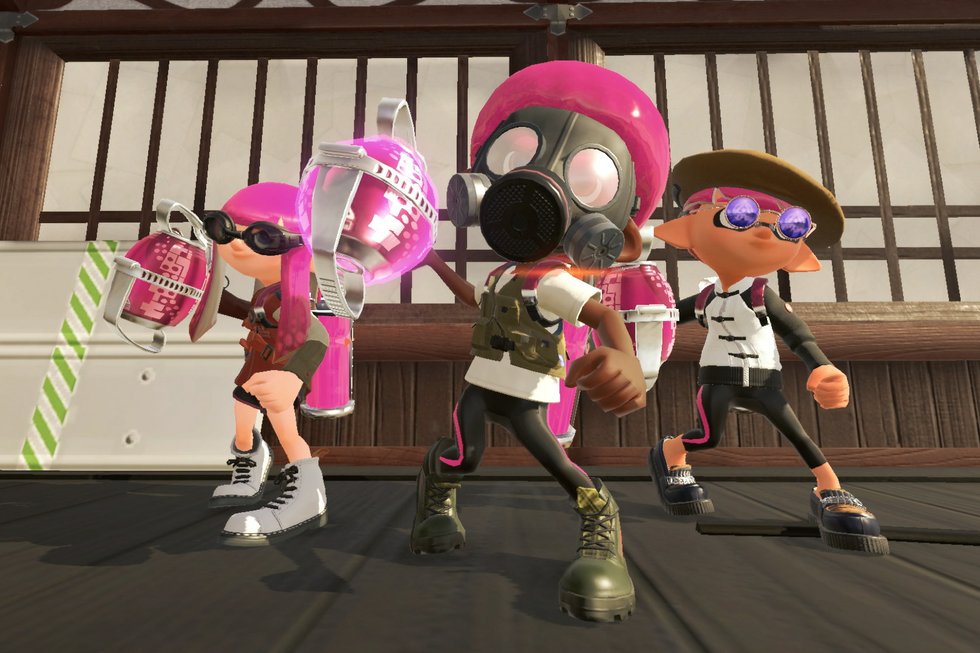 Video games are… good for you?

One year after classifying gaming disorder as an official addiction, the World Health Organization is pushing video games as a perfect physical distancing activity. They’ve partnered with nearly 60 game companies for a campaign called #PlayApartTogether, which includes special discounts, add-ons and, in some cases, in-game safety messaging.

In Splatoon 2, you can buy clothing and accessories that boost your skill level. Some of the most popular right now are face masks, much like the ones the WHO are recommending people wear outside. They’ve become ubiquitous. And one of the major aspects of Animal Crossing is linking up with your friends and visiting each others’ islands – a novel form of hosting and socializing you can do from your own distant home pod.

Part of the reason Nintendo kind of lost me with Wii was the controller. Having to actually pick it up and move it around felt a little too close to actual physical activity. But Ring Fit Adventure is a form of exercise you can do from your living room, and it’s actually fun. You plug your controllers into a ring that you can squeeze and jostle in different ways that let you sprint, stretch and twist (never miss leg day). It’s structured like Donkey Kong Country, with stages and worlds and big bosses that you have to defeat by working out better than they do. You almost don’t notice you’re out of shape and out of breath. Last week, to help with the distancing, Ring Fit added a rhythm mode that lets you do workout routines to classic Nintendo music.

The nature of Animal Crossing is that you build up your island slowly. You do a bunch of tasks, you earn “miles,” you use those miles to build a house or travel to other islands. So when I first tried out the social function of the game, travelling to the island of NOW’s food editor Natalia Manzocco (an actual gamer) I found she was way ahead of me. Hers was an actual paradise, filled with beautiful coconut trees, vistas and a tastefully appointed multi-room house. She was the Joneses.

Natalia told me, via the game’s excruciatingly slow chat function (turns out there’s an app for that), to make myself at home, take whatever I want. “Is there an etiquette to this?” I asked. There is. You typically don’t want to take all their resources without leaving some money or contributing to the local economy in some way.

It was one of the many ways, like masks in Splatoon, that the so-called real world is reflected in the games. It used to be you would buy a game and that was the game. Now they can make updates, respond to current events. Animal Crossing’s time of day and time of year corresponds loosely to real time. The trees are covered in beautiful cherry blossoms, much like the ones at Toronto’s High Park, which will likely soon be closed to visitors. There are literal Easter eggs everywhere in anticipation of “Egg Day” on April 12.

I can’t celebrate those things in the real world, at least not out in public. But I can here.