Aleshea Harris's play about two vengeance-seeking sisters is epic, audacious and a bit messy, but it will sear itself into your imagination 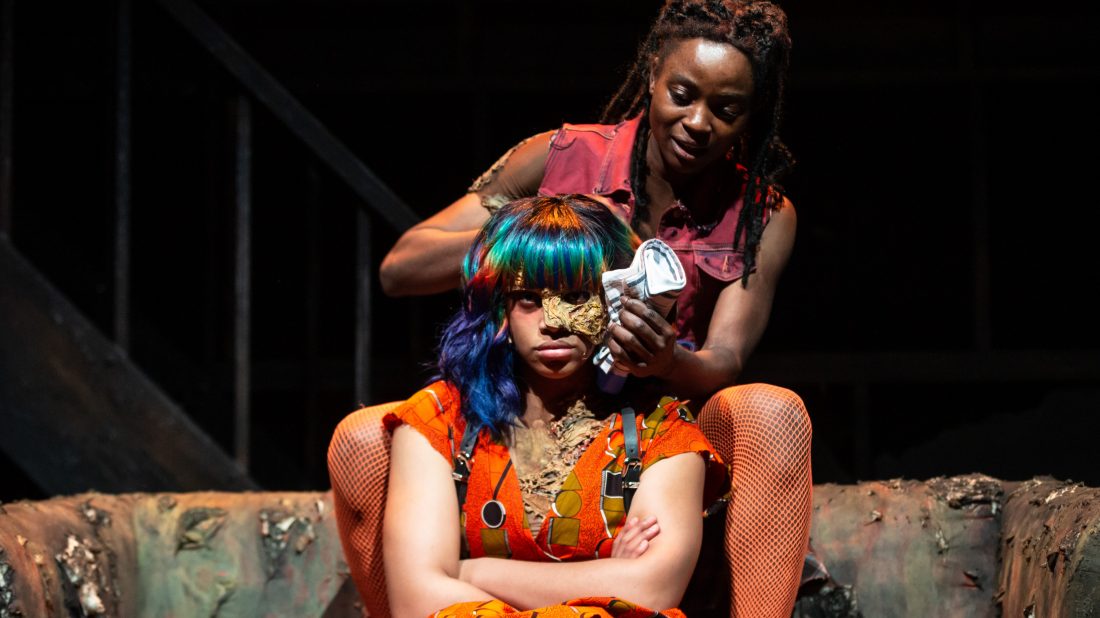 IS GOD IS by Aleshea Harris (Obsidian Theatre/Necessary Angel/Canadian Stage). At the Berkeley Street Theatre (26 Berkeley). Runs to May 22. $29-$84. canadianstage.com. Rating: NNNNN

About 10 minutes into Is God Is, I wondered why I was enjoying myself so damn much. After all, Aleshea Harris‘s play deals with some pretty serious issues, like murder, abandonment, vengeance and retribution, all within one royally fucked up Black American family.

But soon it hit me. More than anything I’ve seen since the return of live theatre, Harris’s play exists in a purely theatrical space. It wouldn’t work so well as a live-streamed production, a teleplay or Zoom reading. Epic, audacious and occasionally messy, it needs to be experienced live to feel its full, scorching power.

Twins Racine (Oyin Oladejo) and Anaia (Vanessa Sears) are still scarred from a tragic childhood fire that supposedly killed their mother. But when Racine gets a letter from their mom 18 years after they last saw her, they set out to visit her, and the swaddled woman, identified only as She (Alison Sealy-Smith), enlists them to head west to track down and kill their father, who set the fire before skipping town.

And so begins a journey that is equal parts Greek tragedy, Spaghetti Western and blaxploitation flick, all with a fierce, gloriously unapologetic feminist twist. Running beneath the play are social undercurrents about everything from intergenerational trauma to the absent Black father and the roots and cycles of crime.

Director Mumbi Tindyebwa Otu‘s production finds just the right tone between urban realism and American myth. I loved how Thomas Ryder Payne‘s sound designs torched and twanged between scenes. Some sounds – like the wheezing of a machine in a hospital room, or the whistling of a childhood song – are so subtly placed in the space that they almost evoke a subconscious state.

Two moveable screens work beautifully to change locales in Ken Mackenzie‘s set, which includes everything from a still-smoking sofa to what could be the interior of The Cosby Show set. Laura Warren‘s projections, meanwhile, variously evoke bloody carnage, fires and, in the climactic scene, a Southern plantation filled with plenty of ghosts.

Ming Wong‘s costumes for the two sisters are a colourful Afro punk riot that contrasts beautifully with the clothes the other characters wear. And the way she suggests Anaia’s facial burns is brilliant.

Each of the supporting actors has a moment to shine, including Sabryn Rock as a middle-aged mom planning an escape from her marriage, Matthew G. Brown as a lawyer who’s probably arranged too many shady deals to count and Savion Roach and Micah Woods as another pair of twins in a bizarro world.

Sealy-Smith’s vengeance-seeking mother is so memorable her bitter spirit hovers over the rest of the play, while Tyrone Benskin‘s appearance as a character identified only as Man is nicely understated and understanding… until he isn’t.

But Oladejo and Sears get most of the stage time as contrasting twins who must either continue the cycle of violence into which they’ve been born, or try to end it. Oladejo thrills as the more dominant, take-charge sibling – it’s she who fashions a weapon out of a sock and a rock. But Sears is just as effective as the more sensitive sister who’s self-conscious about her facial burns and learns to finally express her rage.

Besides mastering Harris’s at-times poetic script, the two commit themselves physically and emotionally to every step of this journey, which will sear itself into your imagination.