Why the musical BLACKOUT is giving theatre lovers some hope 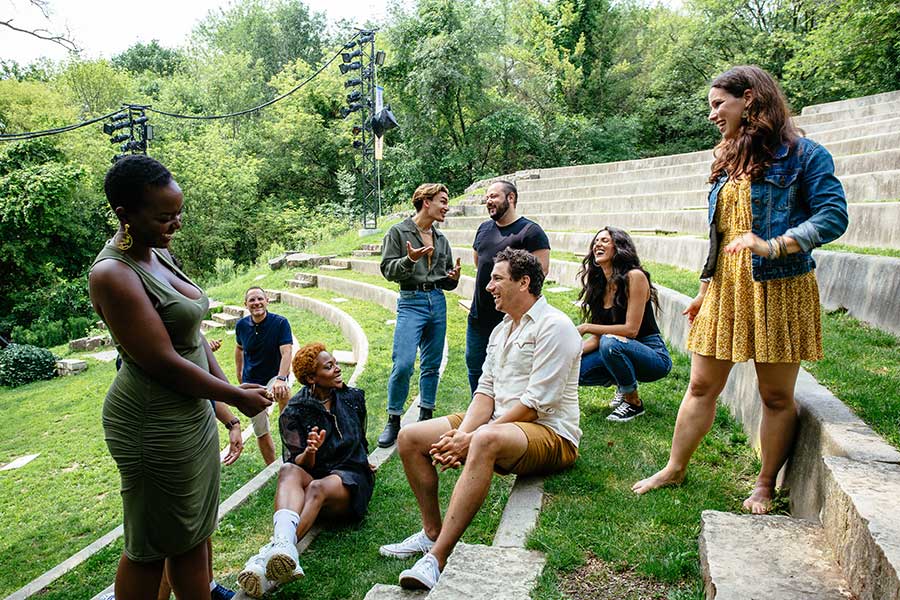 BLACKOUT, the new musical set during the infamous Toronto blackout of 2003, is shining a big, bright light on the local theatre scene. And it’s giving both artists and audiences starved for live theatre some hope.

“I’m pretty thrilled that we get to reopen the theatre scene in Toronto,” says actor Yemie Sonuga (The Book Of Mormon original cast), who plays the title character, Pandora, in one of BLACKOUT’s segments.

“Excited doesn’t begin to scratch the surface of what we’re feeling,” adds rising star Germaine Konji, who’s also in Pandora. “For a live medium, you need the co-creation with the audience.”

“Here we’re going to get an instant response,” says Sonuga. “Whereas on Zoom, you’re constantly having to check the chats.”

Steven Gallagher and Anton Lipovetsky’s musical began life as one piece in Reprint, a 2019 initiative between Musical Stage Co. and the Globe And Mail that saw the creation of three short musicals inspired by articles from the Globe’s archives.

The two were drawn to a photograph of a couple looking out over Riverdale Park at sunset, with no lights in the skyline because of the blackout. They came up with the two-hander Cygnus, about two very different gay men (played by Brandon Antonio and Michael De Rose, returning from that first staging, which earned them a spot on my list of breakthrough artists of the year) who meet by chance late, late at night in Riverdale Park.

Gallagher and Lipovetsky were then commissioned by Musical Stage to develop a full-length show. (Because of the limitations of the pandemic, says Gallagher, development will continue after this production.) Rather than expand Cygnus, they added two more short works: Gemini, about two sisters (played by Chilina Kennedy and Synthia Yusuf) in Little Italy who don’t get along, and Pandora, set in the middle of the night in a Cabbagetown backyard.

Because the two live in different parts of the country – Gallagher in Toronto, Lipovetsky in Vancouver – they were used to collaborating on Zoom, FaceTime and text. So when the pandemic shut down in-person workshops, they were old hands at a technology many of us had to learn from scratch.

What they soon realized, too, was that their musical about one major event took on new resonance and meaning during a global pandemic.

“One theme that strikes me is how we take it for granted when things are moving normally,” says Lipovetsky. “When that stops people re-evaluate things and wonder if they were really working. When the lights go out, a lot of characters in our show find they can’t hide anymore; they have to look closely at their lives.”

Cygnus’s De Rose sees a clear connection between the pandemic and the blackout.

“In the show, there are things we say about isolation and loneliness during the blackout that are probably more resonant now than they were two years ago,” he says. “More people have the experience of this lack of connection, sitting alone in their apartments and not being able to reach out.”

“All of the experiences we’ve shared during the pandemic inform the entire piece. We’ve all lived this together. We are just placing it in 2003, under different circumstances.”

“I applaud their level of sensitivity – whenever we have a day off we get tested,” says Kennedy, a musical theatre veteran who starred in Beautiful: The Carole King Musical and The Band’s Visit.

Such rigorous practices are familiar to Yusuf, who early in the pandemic did some TV and film work that required her to self-isolate. “It’s for the comfort of everybody.”

When the province entered step 2, most of the cast refrained from meeting friends on patios, giving their involvement in BLACKOUT as an excuse.

“No one wanted to be that person who let everyone down,” says Rami Khan, the fourth actor in Pandora.

“I wouldn’t want to damage our integrity or the integrity of the show,” adds Sonuga. “I tell friends I’ll see them in a bit – I need rest. We really do have to take care of ourselves. So in a way, opting out of socializing is easy.”

See more about the return of live outdoor theatre here.