Where The Blood Mixes

Laughter and tears go down smoothly 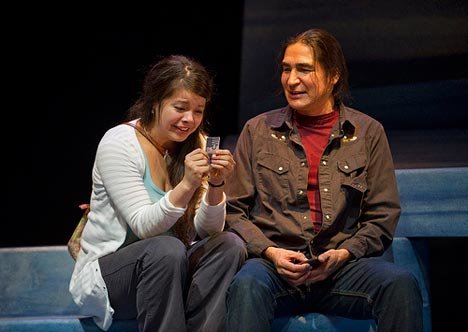 You won’t find a play with the same mix of earthy comedy and raw emotional power as Where The Blood Mixes. Kevin Loring’s Governor General’s Award-winning script takes on difficult material, and this production – part of Factory’s Performance Spring Festival – does it justice.

In a watering hole in a small BC town, Floyd (Billy Merasty) spends his time drinking, trying to pay down his bar tab with hoped-for lottery winnings and hanging out with buddy Mooch (Ben Cardinal), who’s taken to stealing grocery money from his own wife, the formidable June (Margo Kane).

After Floyd gets a letter from his estranged daughter, Christine (Kim Harvey), who was given up for adoption in child hood, he dredges up his past, which, like that of all his friends, includes abuse in the residential school system.

Director Glynis Leyshon sets up a classic buddy rapport between the two men. Cardinal’s Mooch delivers tall tales with gusto, and it helps to have Jason Burnstick’s guitar underscoring key scenes to establish mood. From the start, Merasty’s Floyd is an gry and haunted but unable to understand why.

Equally good are Kane and Harvey, who share a lovely scene about Christine’s mother, the mystery at the heart of the play.

Leyshon effectively keeps some characters who aren’t in a scene on Robert Lewis’s multi-platform set, as if they were overhearing the secrets that everybody knows but no one discusses.

If I have a quibble with the script, it’s that Loring doesn’t dig deep enough into his characters’ histories. We’re left with many questions about what trauma happened to whom. Even a glimpse of the horrors would have made their healing and our catharsis a lot more powerful.