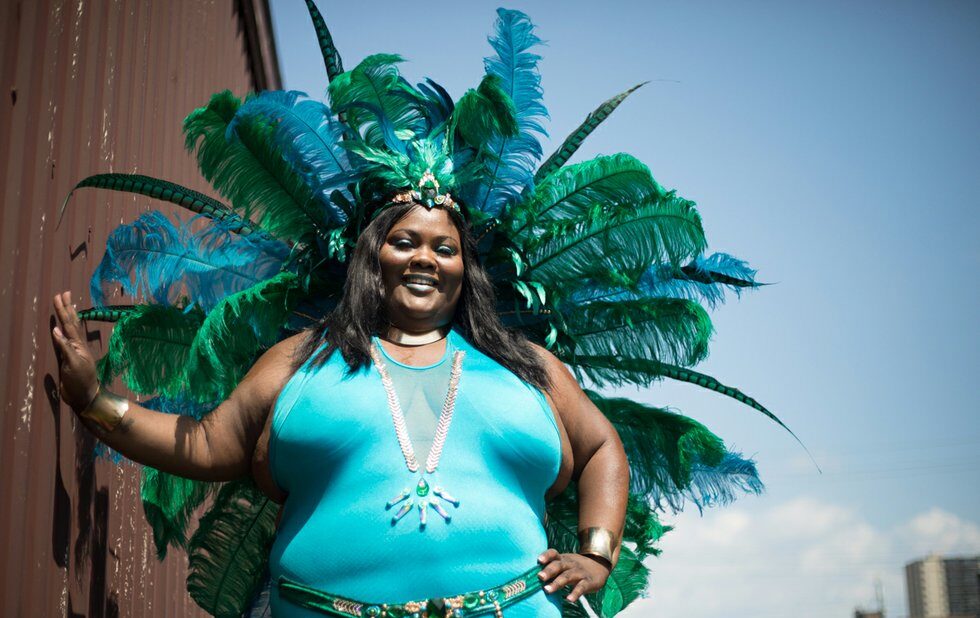 For some, the idea that certain bodies are not celebrated in Carnival seems antithetical to a festival that joyfully celebrates community, diversity and culture. But after her own body-shaming experience, Nadelle Lewis knew that wasn’t the case.

“I didn’t want my [plus] size to stop me from being able to participate in mas. I knew if I felt that way, there were other people who also felt the same,” says Lewis, who has taken part in Toronto’s Carnival for 16 years and Trinidad’s for 12. “I thought, get groups of people that aren’t accustomed to playing mas and I could be that liaison for them.”

Creating a safe space for all to participate, whether a size 24 or size zero, became her mission five years ago when she founded everyBODYplayahmas, a body-positive movement for the Carnival community in Toronto. Since then, the former full-size model has taken on the role of model coordinator for Carnival events and Carnival runway shows, as well as activist.

Lewis reaches out to designers in the months leading up to Carnival weekend and encourages and even guides them on how to create outfits that make revellers of all sizes feel beautiful. She also works as a support person for interested new revellers who are hesitant to take part.

This can mean anything from offering one-piece swimsuits rather than the famous two-pieces to shorts, but without losing festive glamour, of course. Other body-affirming costume modifications include tights or fishnet stockings, feathered boas as well as tankinis instead of bras. And her message reaches beyond attire by encouraging bands to feature diverse shapes and sizes at their launch, as well as in their marketing and social media feeds.

“People need to see themselves represented,” she says, adding that word of mouth has spread the everyBODYplayahmas movement throughout the Caribbean, Europe and the U.S. Today there are international representatives championing the movement globally. “If they can see diversity, they feel more comfortable participating.”

This year Lewis, who has been a member of various mas bands, will be “jumping up” after winning Carnival’s annual “Face of the Festival” contest to officially represent the event.

There’s a belief that Caribbean culture is very body-inclusive, particularly regarding thick or plus-sized bodies. Is this your experience?

We do have a lot more acceptance of curves, but only certain curves are accepted. You must have a shape like those seen in the media or showcased on the models. Not everyone is shaped like an hourglass. [Carnival] should include every body type. That’s what my brand stands for: every body shape. All women have parts they’re less comfortable showing. And that’s from a size zero up to any size.

What inspired you to spearhead this body-positive movement?

I was body-shamed in a [Trinidadian] magazine [in 2012]. My family came across it first and shared it with me. It talked about masqueraders making sure that they work out before playing mas. My reaction was obviously shame at first nobody wants to be seen in that light or to be poked fun at. But I don’t focus on that much because there are always going to be naysayers and people who aren’t for the movement. There are a lot more people who support me.

Have you noticed changes happening?

Masqueraders have been very positive. They say it gives them courage, a community, like they’re not alone. It’s difficult sometimes to put on a two-piece, or something revealing, and parade in the streets. With everyBODYplayahmas, we’re all together, celebrating our culture. Celebrating ourselves and our diversity.

This year, for the first time, Trinidad has a plus-size model at the band launch, where the costumes are showcased. I’ve seen a shift from women who were most often mixed or ethnically ambiguous to more diversity in terms of shape, size and skin colour. Especially in Toronto, a city that celebrates diversity, it was important that I saw it happening here because I know we have the most diverse masqueraders.

Yes. I have met a lot of designers who have a curvy option or plus-size option now. Some are now shifting their mas costumes to include other sizes, or more coverage, because it is not always someone who is plus-size or curvy who wants a full-piece.

Your mission is to lead a safe, inclusive space where everyBODY feels comfortable participating. Are LGBTQ and differently able-bodied women and men included in this ethos?

Absolutely! I have worked with transgender men and women, and the same thing applies to everybody – it’s completely a safe place for people to express themselves.

You’ve described playing mas and being in costume as liberating. How so?

Mas is liberating because it’s tied to the history [of slavery]. Slaves were able to have masquerade events, and during those events they were liberated, even if it was for a short time.

Carnival is a time where I’m not thinking about work or anything. It’s expressing my freedom. Expressing creativity. Having fun. There is a euphoric feeling. We’re all together. We’re all moving in unity and unison. It’s very special.