You know it’s summer on St. Clair West when Bar Ape’s service counter opens its swinging doors for another season. Though the company made its name selling gelato bars out of a converted Piaggio Ape truck, the permanent real estate affords the gelato outfit the ability to play with soft-serve flavours like walnut, pistachio, mint and passion fruit, many of which appear only once or twice per season. Traditionalists can avail themselves of vanilla soft-serve sundaes topped with preserves from locals like Kitten and the Bear and Roselle. 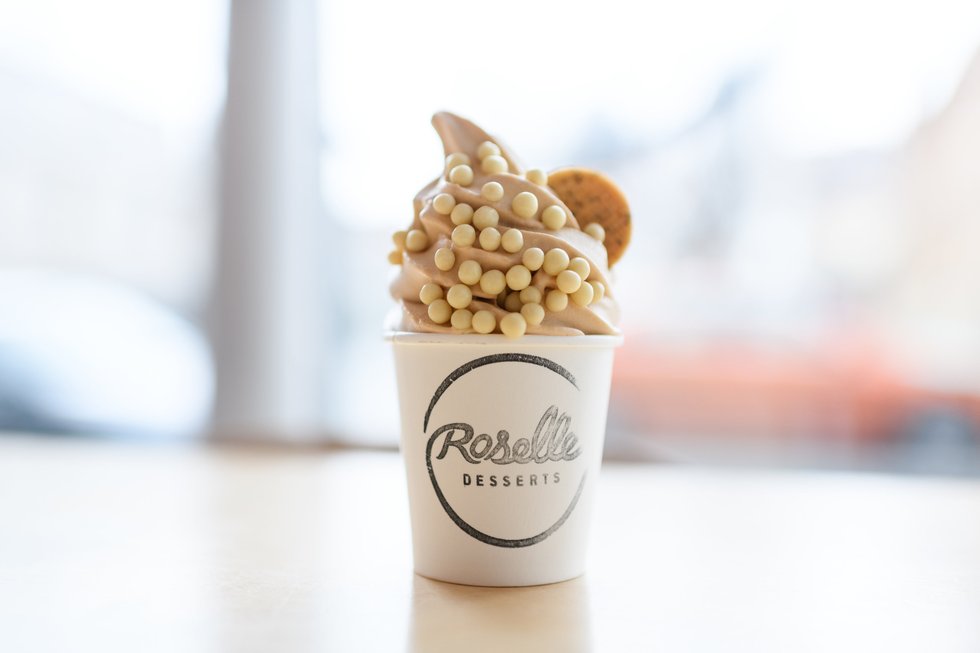 Speaking of Roselle, Corktown’s favourite patisserie also makes a mean soft serve, and this season, it’s available Wednesdays through Sundays rather than just on weekends. Earl Grey is the staple flavour, available decked out with lemon cream, white-chocolate pearls and a mini shortbread for 50 cents (together, not each). But Roselle’s owners also plan to sub in strawberry shortcake and peach buttermilk flavours later in the season. 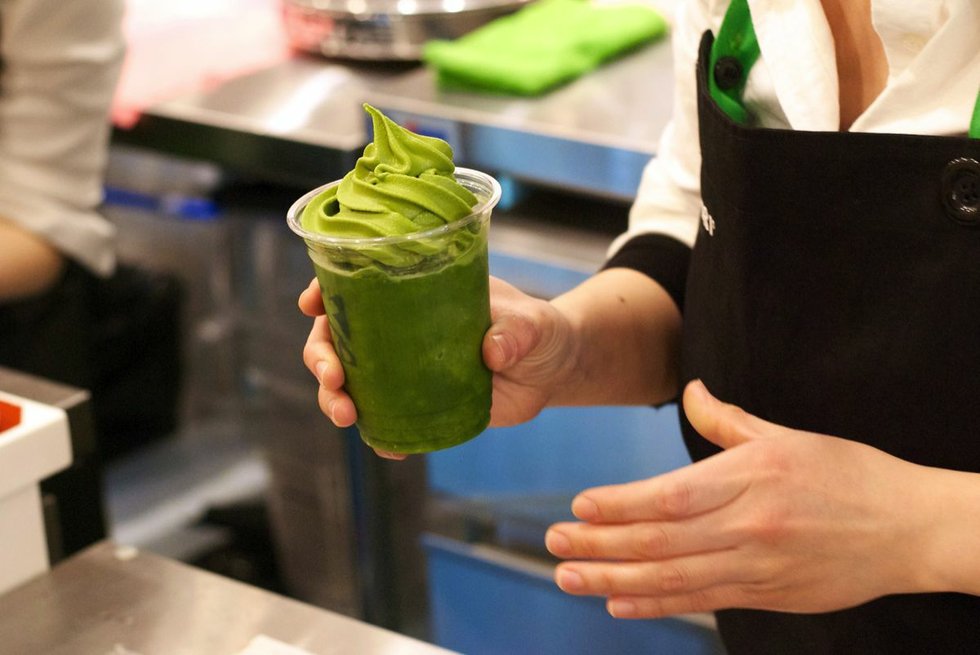 It took a couple of years for the lines to slow down at this Kyoto-based chain’s first Canadian location on Dundas – but once the weather warms up, the hordes come back in search of frosty matcha treats. Green tea finds its way into everything here – even in soba noodles, at the new uptown location in North York – but the soft-serve matcha sundaes, which come topped with proprietary add-ons like sakura-shaped shortbreads and sunshine-yellow candied chestnuts, are still the big draw. 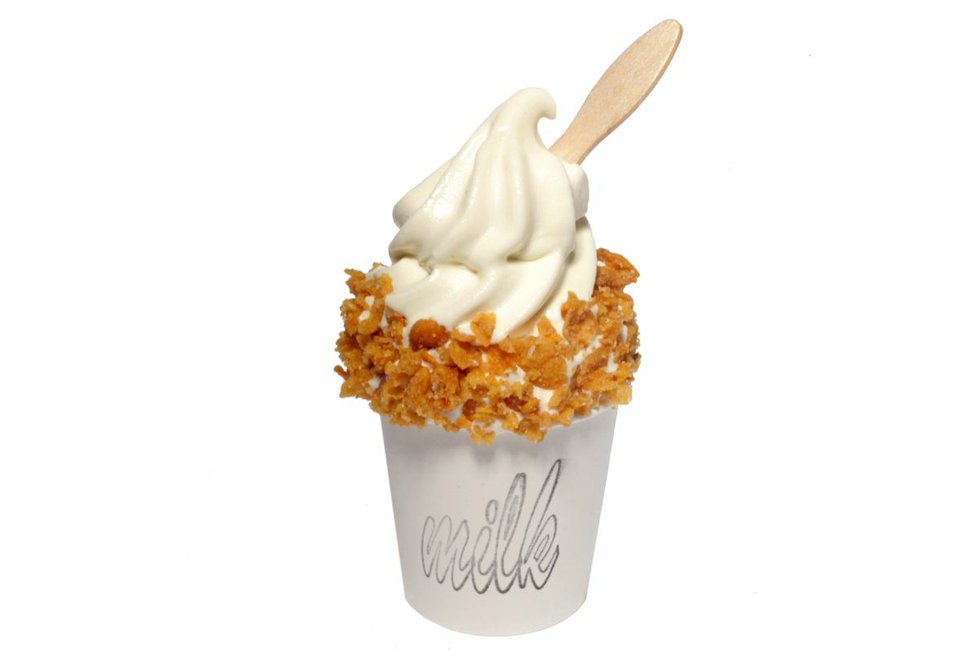 Since opening its multi-restaurant  complex in the Shangri-La in 2012, Momofuku has offered Toronto one of its finest little tastes of affordable luxury. Milk Bar’s cereal milk soft serve may seem steeply priced, at $5.25 for a little Dixie cup (plus 75 cents for the cornflake crunch topping), but the push-and-pull of salty and sweet flavours (and the obvious nostalgia factor) make it more than worth your dough. Your other option is a soft-serve version of Momo’s signature dessert: an oat-crusted buttery delight known as “crack pie”. 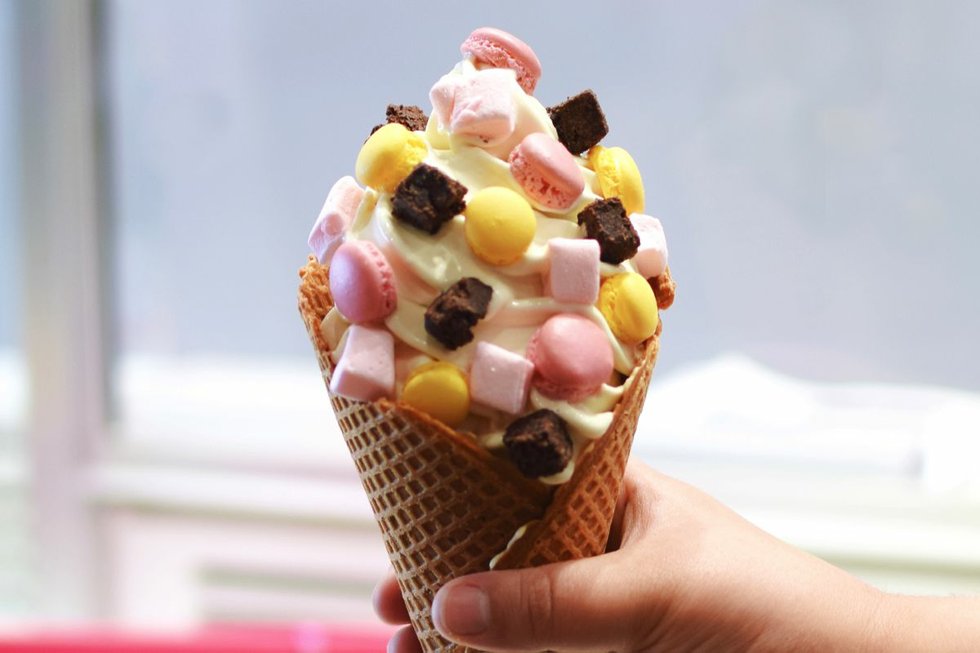 Just when you thought Toronto’s reigning queen of sweets couldn’t expand her empire any further, she added frozen desserts into the mix. Nadège Nourian’s soft serve is available in Tahitian vanilla and strawberry (or swirl) at the patisserie’s Rosedale, Yorkdale and Scarborough Town Centre locations – and, true to form, you can get it in a sundae with a macaron perched on top. The Queen West flagship, regrettably, doesn’t have the twisty stuff, but it did just add a whole ice cream parlour, with scooped flavours like vanilla maple macaron and matcha-raspberry. (Remember that the next time you can’t find the end of the line at Bang Bang.) 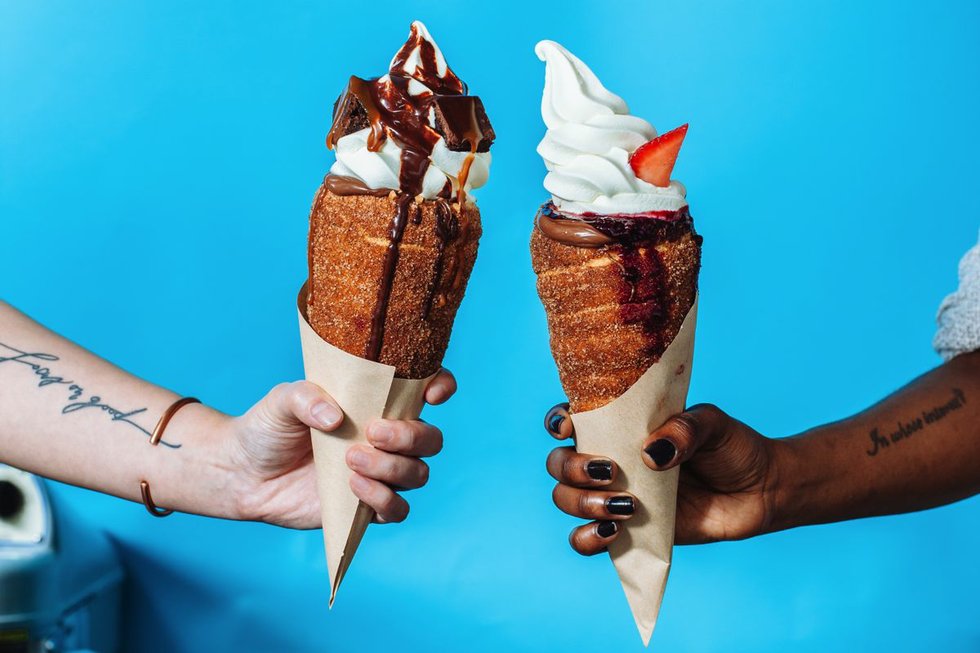 Good soft serve should never play second fiddle to its accoutrements – unless, of course, you’re talking about one of Eva’s chimney cones. Based on traditional Hungarian kürtoskalács, the doughy vessels are rolled, covered in toppings like cinnamon sugar, coconut or freeze-dried raspberry, baked to order, filled with vanilla soft serve (dairy or soy), and transformed into fantastical sundaes with an array of two dozen toppings, including vegan options like caramel and almond bark. This is how you do a wacky giant cone. 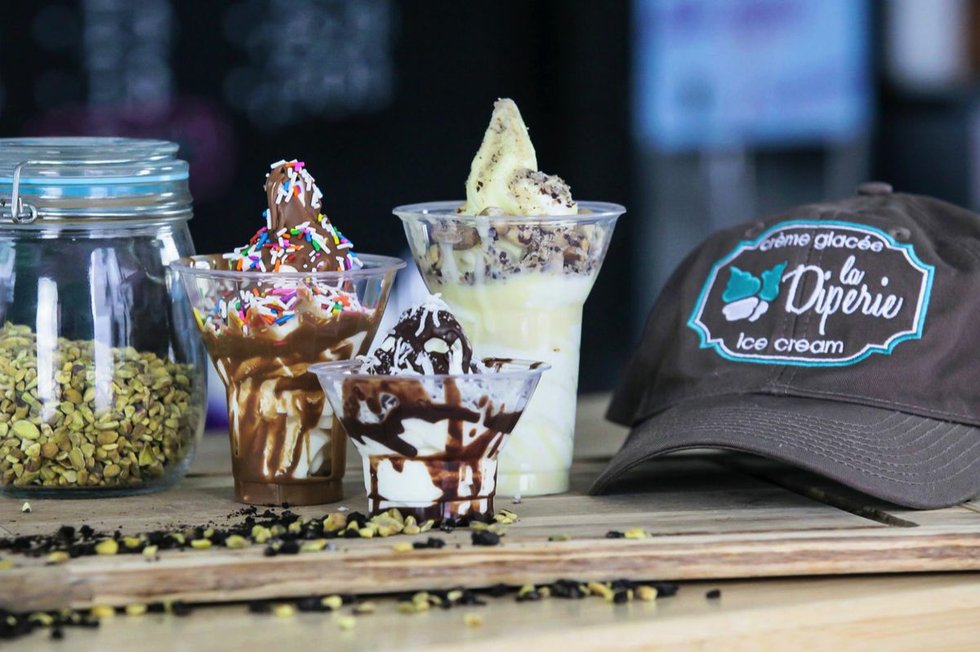 When I dip you dip we dip! Though the only flavour served at this Montreal-based chain’s two Toronto locations is bog-standard vanilla, La Diperie more than makes up for it in add-ons. There are 30 flavours of dip-able shell toppings, from honey lavender to matcha to chili chocolate, plus pretty much every kind of candy, crumble and nut you can think of. 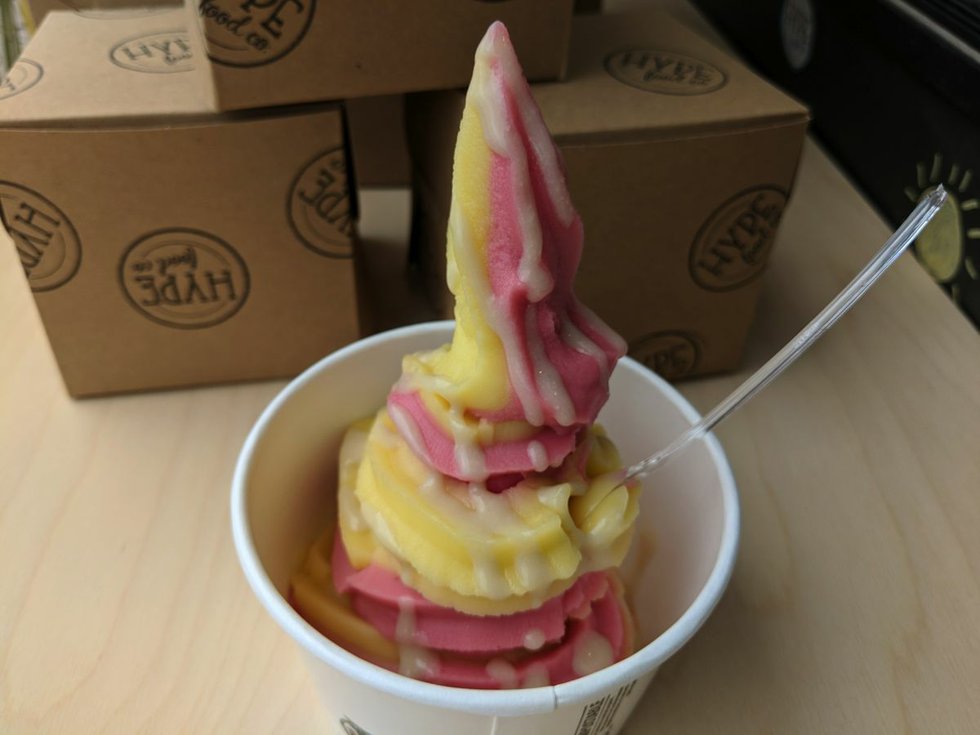 Hype is all about allergy-safe dining, but even those not looking to dodge major allergens like dairy, eggs and shellfish will be packing this cheery white-walled dining room this summer. Why? Two words: dole whip. Owner Pauline Osena’s version uses coconut oil as a base (sorry, coconut-allergy-havers) and comes in pineapple and strawberry flavours, available solo or as a twist. Though they don’t serve it Disney World-style (i.e., as a juice float), that bold flavour’s still there – plus, you can add toppings like chocolate sauce and coconut salted caramel.

Wacky game sausages (alligator and kangaroo, anyone?), duck-fat fries and Belgian brews are more than enough to get ’em in the door of this sleek King West beer hall, but the recently added soft-serve program doesn’t hurt either. At Wvrst, the options are decidedly refined and a little bit Euro – there’s salted maple rosemary, a burnt-sugar “caramel budino,” vanilla bean and pistachio, or a caramel-pistachio twist. 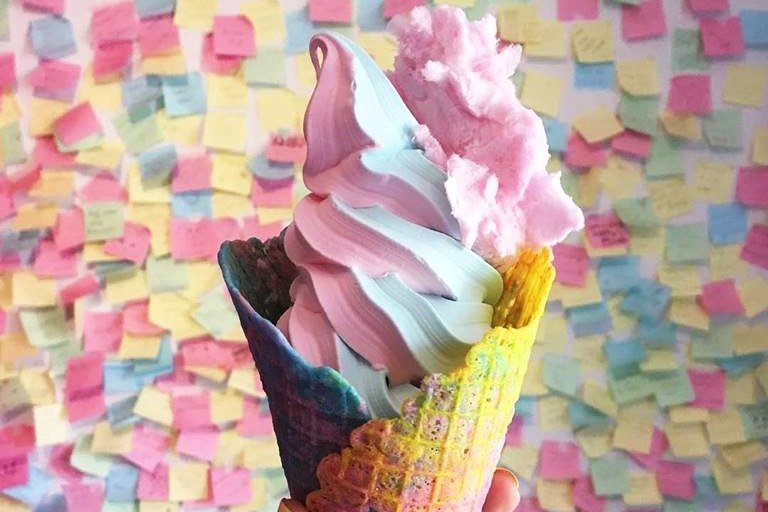 Just looking at this neon-hued café and bakery on Spadina could give you a sugar rush, but its rainbow-tinted cupcakes, whoopie pies and unicorn lattes definitely will. The soft-serve menu comes with all the Instagram-approved accoutrements (rainbow waffle cones! Star-shaped sprinkles!) that you might expect from a place covered in this many unicorn emojis, but the flavours themselves – quirky options like champagne or lavender – make this just as good of a dessert option straight up.