Bugs: Fear Factor fodder or food of the future? 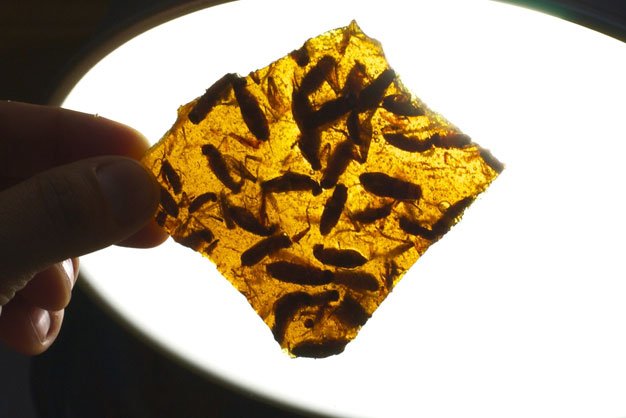 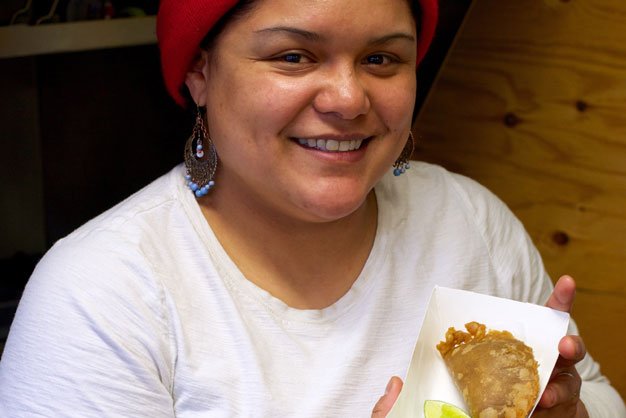 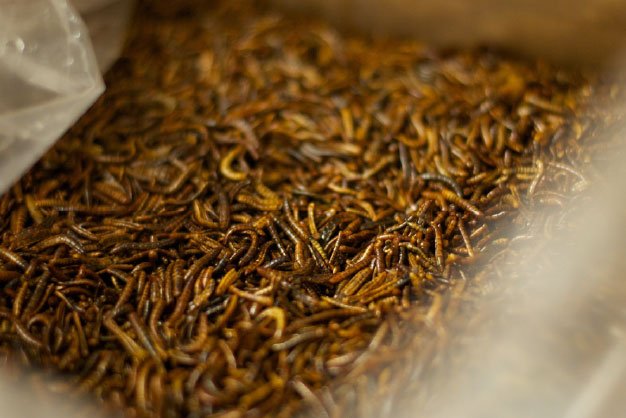 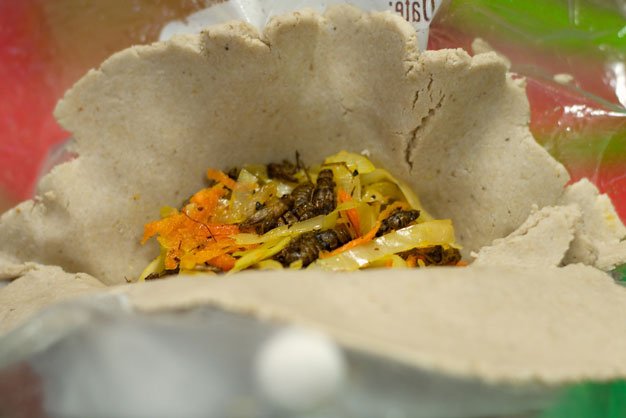 Natalia Martinez invites me to duck under the service window of Cookie Martinez (707 Dundas West), her street food stall at Dundas West’s Market 707, and I crawl inside. What’s that heavenly smell filling the tiny shipping-container kitchen?

Turns out, it’s crickets – or, rather, a molten pool of pitch-dark chocolate in which the crickets are suspended. You can’t actually see their dark little bodies at all, save for the occasional twiggy, bristly arm peeking out.

“The legs are crazy,” she says, before miming having one stuck in her throat.

Martinez does a brisk business in Colombian street foods like empanadas and sweet treats like ice cream sandwiches, but when the chef and caterer set up shop in the market in 2013, she picked up an extra claim to fame as one of the city’s earliest adopters of alternative protein sources.

Martinez has catered Future Food Salon events in Montreal, Toronto and New York, held to boost the culinary use of insects. The events promote awareness and adoption of entomophagy, or human consumption of bugs. Advocates say insects are an inexpensive and sustainable form of animal protein in the face of growing global food insecurity.

At those events, Martinez certainly did her own small part to sell the public on bug dishes. Her roster of recipes, which she’ll also whip up for catering clients, includes cricket pâté on crostini and cricket-mushroom duxelles.

“I did a ceviche with waxworms,” says Martinez of a recent event, getting more animated by the minute. “They’re these little white ones – they’re tasty!”

She also occasionally cooks with mealworms, which are usually served roasted and crunch on the tongue like puffed rice their flavour is nutty and mild compared to the earthier, slightly bitter crickets.

At the market, Martinez puts the latter front and centre, limiting her bug menu to cricket empanadas, brittle and the aforementioned chocolate-smothered critters. She orders hers frozen and untreated: “I do the whole process of boiling them, cleaning them, roasting them, because I can use them the way I want.”

She preps a fresh empanada, spooning a sautéed-vegetable filling studded with bugs into a dough tinged grey-beige with cricket flour. Fresh from the fryer, the empanada’s crisp, oil-saturated exterior and steamy, stringy veggies recall a spring roll, with the only slightly detectable crickets lending what Martinez calls a “nutty, shrimpy flavour.”

Their slightly bitter aftertaste makes them even better suited to the dark, barely sweetened chocolate: in the middle of the richness, there’s a little bit of a crunch, then a chew, then maybe – did I imagine it? – a hint of bristle heading down the throat. See listing. 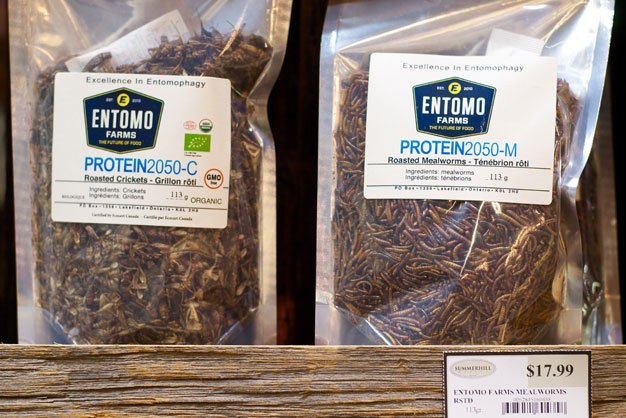 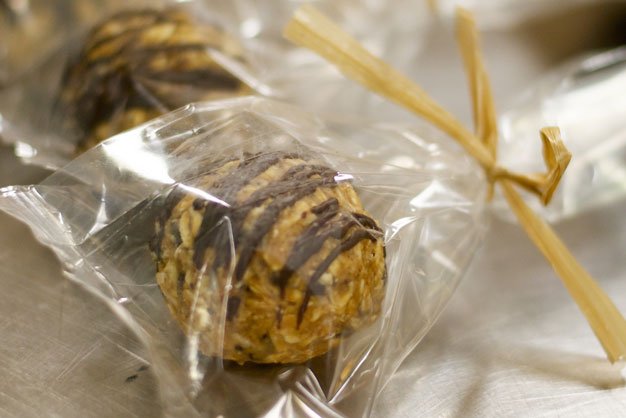 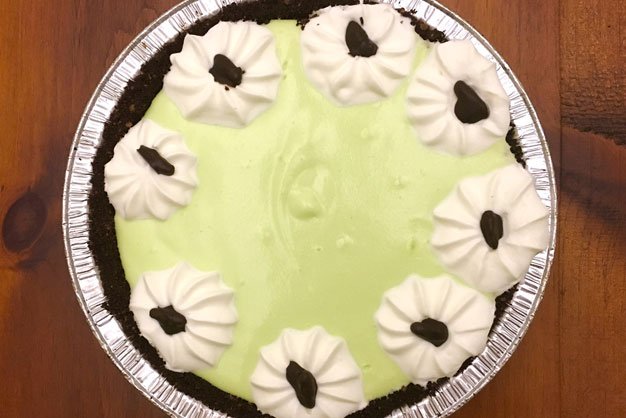 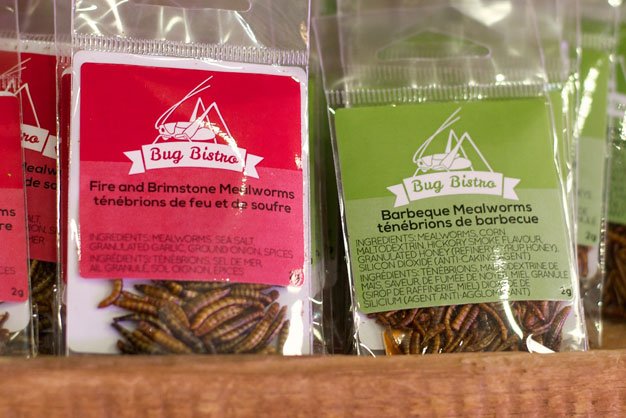 “We’ve had some people who let us know that they think it’s disgusting and hideous that we even have it here,” says Summerhill’s Brad McMullen. Others are more curious, daring one another to try the free samples.

The novelty factor was what prompted McMullen, who often looks for ways to capitalize on unusual and up-and-coming food trends at the independent grocery, to make the initial order. But for him, engaging more inquisitive shoppers in conversations about bugs’ role in fighting global hunger is really where things get interesting.

“We’re trying to feed seven billion people on the planet while dealing with greenhouse gases and environmental issues. So this, for a protein derivative, is one of the best fixes,” he says. “It’s a more serious conversation than that gross, Fear Factor-type thing.”

He acknowledges that the tipping point hasn’t quite happened in Toronto the bugs are sought after more as stunt food than a legit protein-replacement source. So the market’s second-floor catering kitchen is making use of their stores, cooking up a classic (and thematically appropriate) grasshopper pie recipe with cricket flour in the slightly bitter dark chocolate crust and chocolate-covered creepy-crawlies on top, or delectable peanut butter mealworm balls you’d swear were made out of just PB, chocolate chips and oats.

“I think food is inherently disgusting, when you think about it,” McMullen adds. “Sucking off the teat of a cow – how disgusting is that? But milk is in absolutely everything.

“So is milk disgusting? No, we’re just desensitized.” See listing.

Where else to chow down on crickets 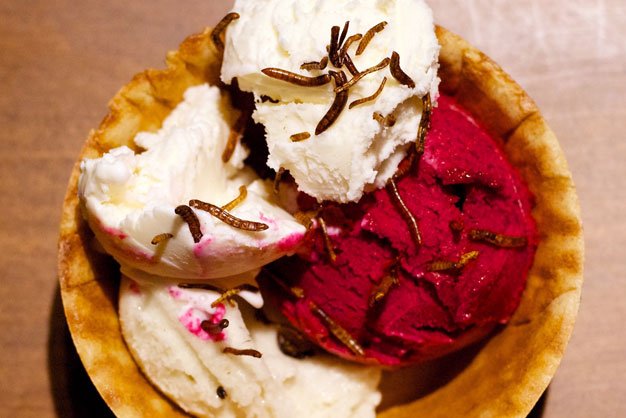 Death in Venice’s gelato sprinkled with crisped crickets and mealworms.

In some parts of Mexico, chapulines (aka grasshoppers) are a fairly common protein source. That’s not the case at Toronto’s many, many Mexi-lite taco spots, but the Distillery’s El Catrin goes out on a barb-covered limb by adding crickets, when in season, to their guacamole. The kitchen was fresh out until last week, says chef Olivier Le Calvez. Now you can enjoy the fava-bean-fattened critters marinated in chilis and oil, then fried and tossed tableside into your guac for an extra $8.95.

Porcini mushrooms, smoked hay, truffles and roasted eggplant are all fair game for Kaya Ogruce‘s mind-bending gourmet gelato outfit. So, naturally, he’s got no reservations about sprinkling the occasional pint with crisped crickets and mealworms. The Stratford Chefs School instructor’s creations are less about laid-back summer savouring and more about exploring a broader world of culinary pairings, using gelato as the medium. For the savoury, slightly bitter bugs, dark chocolate seems like a natural fit. That gelato also uses cricket flour as a thickener instead of skim milk powder. “I tried to source cricket milk,” he says, “but so far, no luck.”