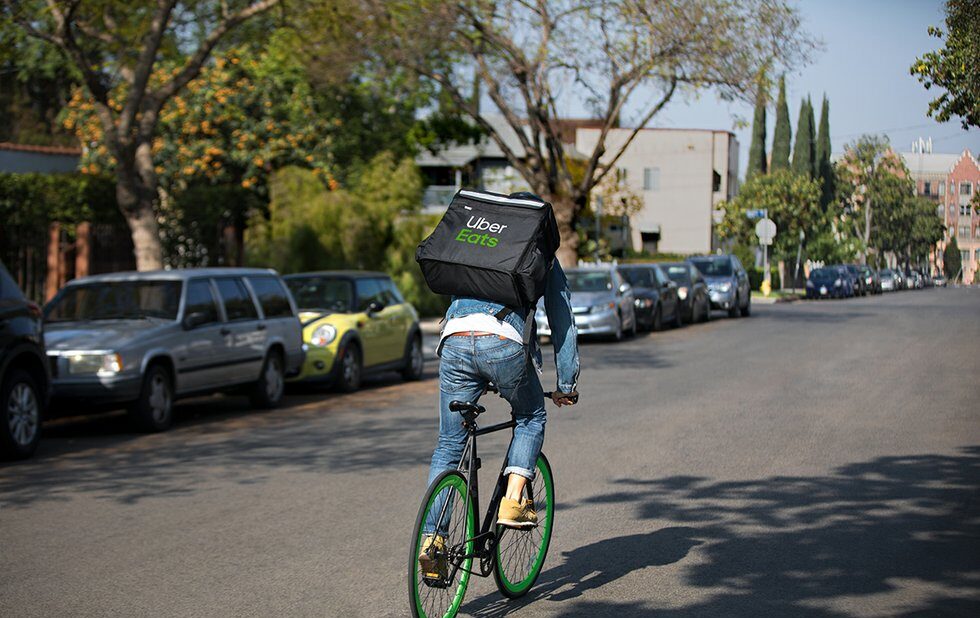 Along with Foodora and SkipTheDishes

Along with Foodora and SkipTheDishes, UberEats is one of the biggest food delivery apps in Toronto.

Food delivery apps have gone from modern convenience to a cornerstone of the Toronto restaurant ecosystem, with businesses seeing ever-larger cuts of sales beaming in from outside their dining rooms.

The number of bike couriers and drivers ferrying those orders from point A to B has risen in tandem. So has the scrutiny around “gig economy” work – jobs that classify workers as independent contractors, offering flexibility but few legal protections.

“It really is the Wild West of gig work,” says an anonymous 32-year-old bike courier, who has been working for the big three local players – UberEats, Foodora and SkipTheDishes – since 2016.

Delivery apps pay riders on a per-order basis, with each app offering its own pay scheme. If you get a string of good orders, or are willing to go out in brutal weather, the money can be good – some couriers have netted earnings as high as $1,000 a week, depending on platform and time of year.

But in the gig economy, nothing’s ever guaranteed. “Most people have no idea about how we’re paid and treated, and they’re shocked and appalled,” says Alexander Kurth, who has worked for Foodora (and occasionally UberEats). “It’s so unreliable and so precarious.”

Long waits during slow periods force couriers to juggle multiple apps to scrape together pay that sometimes hovers around the minimum wage mark. “The best people at this job are, A, insane cyclists, and B, insane multi-taskers,” says Ivan Ostos, who’s worked for Foodora, UberEats and DoorDash.

The money you make comes with the ever-present risk of injury or gear theft one courier said he’s had three bikes stolen in three years.

Most infuriating of all, couriers say, are often-punishing terms that make it difficult for couriers to truly know what they’ve agreed to before they hit “accept.”

A service might not tell you how far you’re going – or how much you’re making – until after pickup. Or they might not tell you what’s in the order, which means you’re stuck biking across town with a huge, leaking plastic container of soda strapped to your back. If you decline, you could be penalized through a temporary cool-down period – or permanent ban.

This frustration has fuelled a unionization drive among Foodora couriers, and sparked a firestorm this month when DoorDash was revealed to be keeping driver tips as part of their “guaranteed minimum” pay scheme. (The company has since walked back the decision.)

Each app has its own set of perks and pitfalls, with drivers juggling their various demands to eke out a full-time work week. We spoke to a number of couriers – many of whom work for multiple services and who spoke on condition of anonymity – to get a full breakdown.

Pay: $4.50 for delivery + $1 per km between restaurant and customer. (Worth noting: That pay has not changed since NOW last looked at courier salaries in 2016.) Last winter, Foodora started offering bonuses during high-demand times.

Tips: Foodora couriers generally keep their tips. However, drivers in suburban areas are instead given a $16 per hour guarantee, into which tips are absorbed. It’s also not possible to add or change tips after the order is placed, a pain point for drivers.

Transparency: Foodora offers drivers a map estimate of their delivery path, as well as a kilometre estimate, before drivers accept or decline. But they don’t tell you how much you’ll get paid – you have to do that math yourself, couriers say.

Experience: While Uber’s customer service interface is more automated, drivers say Foodora involves significantly more back-and-forth with dispatch, especially in the case of order problems, which eats into time that could be spent finishing other jobs.

Couriers are often sent far away (an order ready in five minutes at Spadina and Bloor when the courier’s at Queens Quay, for example), or they might arrive at the pickup point and the order hasn’t even been started. All of that time spent hustling to get to the restaurant, or waiting, is unpaid.

“They recently added the ability to decline orders in the app, but you get penalized for declining too many — and if you decline they put you on ‘time out’ for several minutes, or else you’ll just get assigned the same order again,” a Foodora courier says. “I’ve learned it’s generally not worth it to decline.”

Kurth says he chose Foodora over UberEats because of a higher tip frequency, as well as what he perceived to be a more people-focused approach from management – but “neither of those are true anymore. I feel like Foodora has become just as cold.”

Tips: Couriers receive 100 per cent of the tips they’re given, an UberEats rep confirms. The app allows tipping before or after the order is completed.

Transparency: UberEats doesn’t show drivers their drop-off distances – or their pay – until after they’ve picked up the order. Drivers say penalties can be stiff if you cancel an order when you get that info at pickup: Stories swirl about drivers who cancelled and were blocked by the Uber algorithm for “stealing” the food.

Experience: Uber’s system relies largely on automation — which can be a pro and a con. The streamlined tech can lead to smoother deliveries: For example, if a courier arrives at the drop-off and the customer is unreachable, a countdown begins if the driver hasn’t heard anything in five minutes, they’re free to go (and still get paid).

The combination of better tech and a higher order volume also leads to more efficient dispatching, couriers say. But when things go wrong – as in the case of suspension – that also means it’s tougher to get a human on the line for an appeal.

Uber’s aggressive courier recruitment also makes it tough to get orders in slower seasons like the summer, when the system is rammed with fair-weather couriers.

Pay: SkipTheDishes’ exact pay system appears to be a closely guarded secret. Company reps say courier pay “is calculated based on the estimated time and distance from the courier’s location to the restaurant, and from the restaurant to the customer’s delivery address.”

Most apps don’t pay for time spent getting to the restaurant, so drivers for “Skip” (as it’s known) say that’s a major plus.

Transparency: SkipTheDishes gets points from drivers for transparency in dispatching orders: Couriers are told where they’re going and how much they’ll be paid, and in contrast to other delivery platforms, they aren’t penalized for cancelling. (If you miss a shift, however, your next scheduled shift may be reassigned, couriers say.)

Experience: SkipTheDishes, along with DoorDash, are known as lower-volume delivery apps among couriers: business is significantly slower, but orders pay better on average. (Ostos estimates about $10 per order compared to the $4-$7 the other apps might net you.) Many couriers keep a low-volume app and a higher-volume app running at the same time in order to maximize their time on the road.

Though SkipTheDishes is more forthcoming with delivery info and chill about cancellations than its competitors, couriers say the payment system is frustratingly opaque. Previously, the app would show how much of your pay-per-order was a tip, but that’s been removed: “I guess they didn’t want people discriminating over orders,” one courier says.

Pay: As with SkipTheDishes, DoorDash’s payment scheme isn’t easily understood by its workers. The pay scheme works on a “guaranteed minimum” basis, which offers couriers a per-order fee based on “a variety of factors including the size of the order, whether you have to place the order in person and the projected driving distance, traffic, parking and wait time at the store,” according to the DoorDash site.

Tips: DoorDash received major blowback this month when a New York Times reporter pointed out that, in DoorDash’s “minimum” pay arrangement, tips just save DoorDash money rather than going directly to the courier. DoorDash has since announced it will be altering this policy, though the new tipping arrangement is unclear.

Transparency: “Before you accept an order, they tell you where you’re going, how much you’re getting paid and total distance, so you can determine whether you’re good or not – they just don’t explain how they’re paying you,” another courier says.

Experience: DoorDash’s lower order volume is balanced out with a “zone” system that many couriers find forgiving. Delivery zones are small, meaning couriers won’t be sent long distances, and drivers can see which neighbourhoods have a high or low volume of couriers already on the road before they sign on to deliver there.

While DoorDash does dock drivers’ scores for declining orders, which could affect how many orders they’re offered in the future, it’s not as extreme a penalty as some other apps.

One major sticking point with DoorDash, Ostos says, is that it’s the only app that allows customers to request to pay in cash, which has led to security concerns among drivers. “The majority of Dashers I talk to decline those orders – people are scared of getting robbed,” he says.