On an average day, Toronto’s best Chinese restaurants are bustling with activity and packed elbow to elbow, with rooms alive with chatter and the clatter of utensils. In recent weeks, however, many dining rooms have been unnervingly silent.

The spectre of the coronavirus outbreak – and the Sinophobic sentiment fueling the public’s fears – have prompted outright harassment toward Chinese restaurants, with vicious rumours and tasteless memes proliferating across the internet. And though the backlash to such sentiment has been loud and swift, the long tail of coronavirus worries can still be seen in many dining establishments, who say they are having trouble attracting their usual base of diners.

Downtown mainstay Yueh Tung told the CBC that business has dropped more than 30 per cent in recent weeks, adding they know of other restaurants “getting calls, they’re getting people threatening them, telling them to go back home where they came from.” Restaurants in suburban areas filled with families, like Markham and Richmond Hill, have been particularly hard-hit by the downturn in business.

In addition to offering delicious eats, Toronto’s Chinese restaurants and small businesses are valuable community fixtures and cultural hubs in an increasingly homogenous city. To celebrate their impact on Toronto’s food culture, we asked Toronto cooks, restaurateurs, food writers and influencers to tell us all about their favourite Chinese restaurants in the GTA. 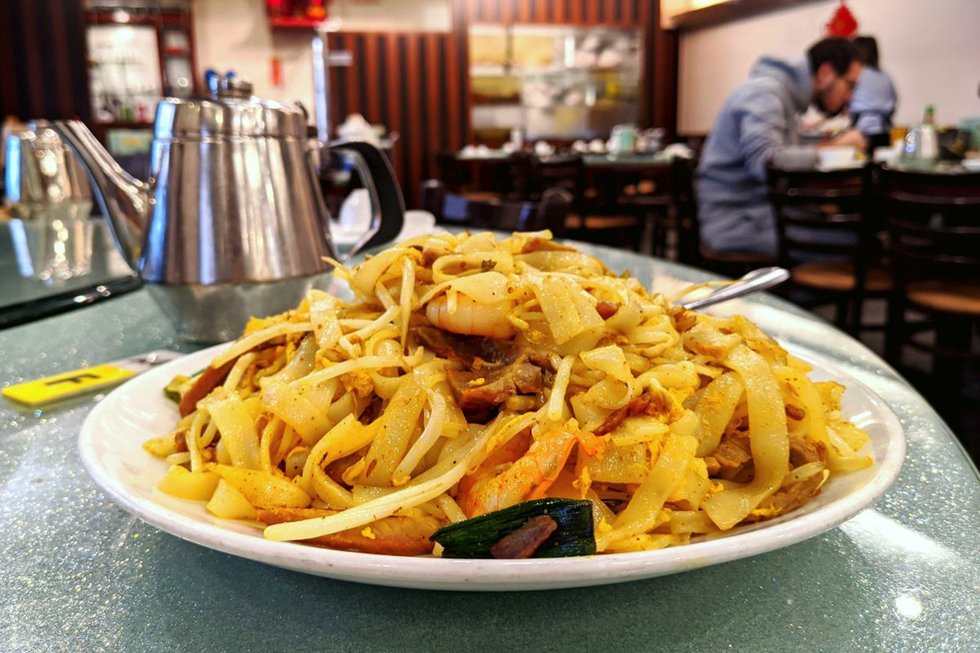 House of Gourmet (484 Dundas West) is my go-to jam. It’s my local noodle/congee shop I’ve been going to for over a couple of decades now. Great, soulful Chinese eats for post-service meals, quick lunches, partner meetings…

My other fave is Big Beef Bowl (8362 Kennedy) in Markham. Chef-owner Evan makes the most amazing hand-pulled noodles and daily soup dumplings, among many other regional street-style dishes.

Our weekday standby is Congee Queen (1911 Dundas East #17, Mississauga, and others). We’re there almost weekly – basically, any time we can’t get our act together to make dinner. They manage to defy the rule about restaurants with long menus, because somehow, they manage to do everything well.

The other place I fell in love with recently is Xin Jiang Restaurant, (3636 Steeles East, #106, Markham). As the name indicates, they specialize in the cuisine of Xinjiang, which is in northwestern China, and an area with a large Muslim population. Their barbecued lamb skewers – covered in cumin and chili – are smoky and delicious. And their handmade noodles are chewy and perfect.

I always ask my friends to be more specific when they ask where to go in the suburbs for Chinese food. (I mean, no one asks where to eat “American” food, right?)

For the Cantonese banquet hall experience with the wok-fried lobsters, whole steamed fish and Peking duck spinning on the giant turntable, I direct them to Perfect Chinese Restaurant (4386 Sheppard East, Scarborough). It seems like everyone who grew up in the burbs has childhood memories of it. It’s open 24 hours – I remember eating there at 1 a.m. as a kid when my family came back from a trip to Hong Kong.

Skyview Fusion Cuisine (8261 Woodbine #8, Markham) is another banquet hall that does all the classics and it’s one of the most popular spots right now (it’s my parents’ go-to, and they always have to make a reservation). Go early on weekday mornings when they have early-bird pricing on dim sum – it’s a common practice at many dim sum restaurants, but I feel like not a lot of non-Chinese people know about this.

My favourite vegetarian restaurant of all time is Buddhist Vegetarian Kitchen (3290 Midland #9, Scarborough). Like Perfect Chinese Restaurant, this place has been here for ages. The thing to get is the assorted seitan, which is displayed at the front window. I don’t think it’s listed on the menu – or maybe I just don’t know what they call it in English – but the Cantonese name for it is “jai lo may.” There are strips of crispy bean curd skin curry and sweet-and-sour marinated seitan rolled bean curds. It is one of my favourite things to eat. Go early for sure, because they usually sell out by dinnertime.

For those complaining that they live downtown and can’t make it up to the burbs, I tell them to go to Phoenix Café (10A Edward), the downtown offshoot of the Phoenix Restaurants in the suburbs. They do Hong Kong-style diner food: baked pork chop in tomato sauce on rice, fried fish cutlet in cream sauce on spaghetti, pineapple buns with a thick slice of butter in the centre, French toast with golden syrup (we don’t do maple). Wash it all down with cups of Hong Kong-style lemon tea, milk tea or a ying yang (milk tea mixed with coffee – which is a uniquely Hong Kong thing).

There are arguably better and cheaper Chinese restaurants in the city, but Pearl Harbourfront (207 Queens Quay West #200) is the establishment my family has visited since I was a child. For special occasions and for hosting out-of-town guests, there is no better view that comes with a pair of chopsticks. A decade ago, my cousin got married there, and in April we will celebrate my son’s first birthday at Pearl – continuing our family’s tradition.

The dim sum at Dim Sum King (421 Dundas West) is delicious, especially the shumai – but I love it there for more than just the food. The place is always packed with people who seem so genuinely happy to be there. There are always tables full of friends and family and you feel that joy as soon as you walk in.

Congee Star (900 Don Mills) has been my go-to Chinese restaurant for years, and when I had kids, it continued to be our staple family spot. There are about a gazillion things on the menu but everything is always consistently good.

My personal favourite is the deep-fried squid with spicy salt. It’s crunchy, savoury and packed with so many layers of flavour. My kids, who are usually light eaters, always get a double order of the won ton soup here.

While I don’t have a “favourite” spot – there are so many around Kensington Market to choose from – I had a great meal recently at a restaurant in Markham named Omei (420 Highway 7). They specialize in crab and lobster at dinner, but their dim sum is excellent. A highlight for me was their rice noodle roll filled with BBQ pork – it was bursting with filling and so tasty.

The Daily Dumpling Wonton Co. (792 College) is my local spot. I love everything that I have tried here, but my absolute must-haves are the classic Shanghai dumplings with pork and mustard greens and the vegan dumplings made with spinach – with peanut sauce and hot sauce!

Rosewood Dim Sum (463 Dundas West) is my jam! I always get the pan-fried pork dumplings, pan-fried shrimp-and-chive dumplings, the grilled preserved meat, turnip cake and the honey garlic beef short ribs. They are the perfect-sized morsels, and there’s so much to pick from.

I love nothing more than walking through the puddle of yellow light cast off from the King’s Noodle sign (296 Spadina) on a cold, wet night. Seeking shelter behind the veil of condensation on the windows. A bowl of BBQ duck and won ton soup with noodles whisked to my table, as if they divined my hunger as I passed through the crowded entrance.

Equally important are my trips to pick up supplies like pandan leaves, rice noodles and galangal from the Hua Sheng supermarket (299 Spadina), or to add a new rasp or wooden spoon to the crock in my kitchen from the houseware giant Tap Phong (360 Spadina).

Asian Legend (418 Dundas West) is our go-to on Christmas Eve, where my family and other Jewish friends book one of the rooms in the basement and go wild with the lazy Susan.

Chinese restaurants have always been there for us in our times of need, and I’ll sure be there for them during their time of need. With pleasure. Especially when soup dumplings are involved.