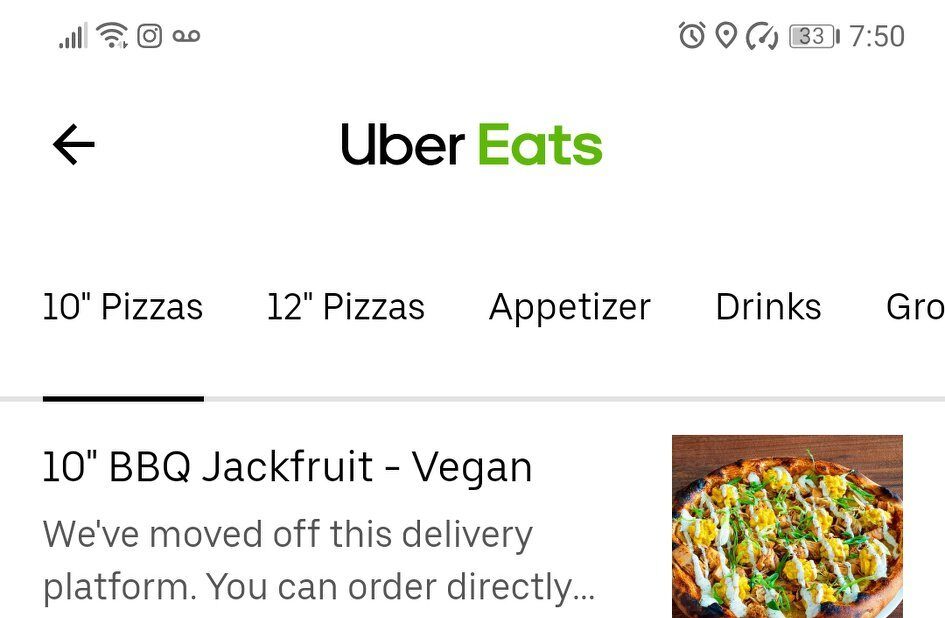 It’s hard enough to launch a new restaurant during a pandemic. It’s even harder when your only sales platform is taking 30 per cent of every order.

When the owners of Away Kitchen + Cafe were ready to relaunch their Queen West restaurant as the vegan pizza joint Pizzeria Du last month, they opted for Uber Eats. They had to do takeout and delivery (due to COVID-19, dine-in service is not an option right now) so they chose the one that other restaurant people told them was the most dominant. They needed to embed themselves in the market as quickly as possible, and Uber is where the customers are.

They were surprised by what happened next: Not much at all.

“They weren’t sending us any new customers we weren’t getting from just promoting ourselves on social media,” co-owner Roger Yang says over the phone. “At first you couldn’t even find us on the platform unless you searched our name directly. Not ‘pizza,’ not ‘vegan pizza.’

“They weren’t really helping us, but we were helping them. We were just handing our customers over to Uber.”

He asked himself why they were promoting this third-party app that was eating into their sales and, even worse for him, potentially damaging their reputation – handing the food over to a gig economy delivery driver meant the restaurant couldn’t control when their pizza would end up in customers’ hands or how hot it would be.

Yang says he’s had around six restaurants express interest and hopes to start locking them in over the next few days. The idea is a decentralized delivery system, shared and managed collectively by Toronto restaurants, with no commissions or fees. Everyone shares in the costs and the profits.

“[Uber Eats] is a great concept, but it’s too expensive for a restaurant [right now] and it gives the control to some faceless corporation in Silicon Valley,” says Yang. “What we need is a different way of thinking. We need an alternative that’s run by us, by our industry, and that’s accountable to us.”

Yang says with the wage subsidy, Pizzeria Du has been able to do deliveries slightly cheaper than they were with Uber Eats, but they can achieve better efficiency and economy of scale with more restaurants working together.

The next step, he says, is employing GPS software to optimize delivery routes, times and assignments. He’s already hired two delivery people for Pizzeria Du – a driver who’s a retired naturopathic doctor and a cyclist who previously did gigs for the now-departed Foodora. One of the biggest challenges has been finding insurance. “Nobody wants to insure an independent restaurant for food delivery, but you can get suite insurance if you can get a chain or group of five or more drivers.”

For restaurants, bringing delivery in-house means they can ensure better dedication, care and service. And for the delivery people working during a public health/economic crisis, being employed directly would mean they could avoid the precarity of the gig economy, get paid an hourly wage, be eligible for employment insurance and get protected by the Workplace Safety and Insurance Board. Yang’s eventual goal is to provide health insurance too once cash flow returns post-pandemic.

There’s no name for the service yet, but he looks at it more as a resource for restaurants than a customer-facing marketing tool.

In the meantime, you can still find Pizzeria Du on Uber Eats. The description for every pizza says “We’ve moved off this delivery platform. You can order directly at pizzeriadu.ca.”

There’s no option to just take your restaurant off the platform without calling or waiting to remove it, so this was a way to let his customers know “Hey, we’re not here anymore.” Ironically, it’s performing the function that drew them to Uber in the first place: marketing.

“The only reason customers are finding us there is because we were pointing them to Uber in the first place,” says Yang. “So I don’t feel bad about using Uber’s platform to get them back.”