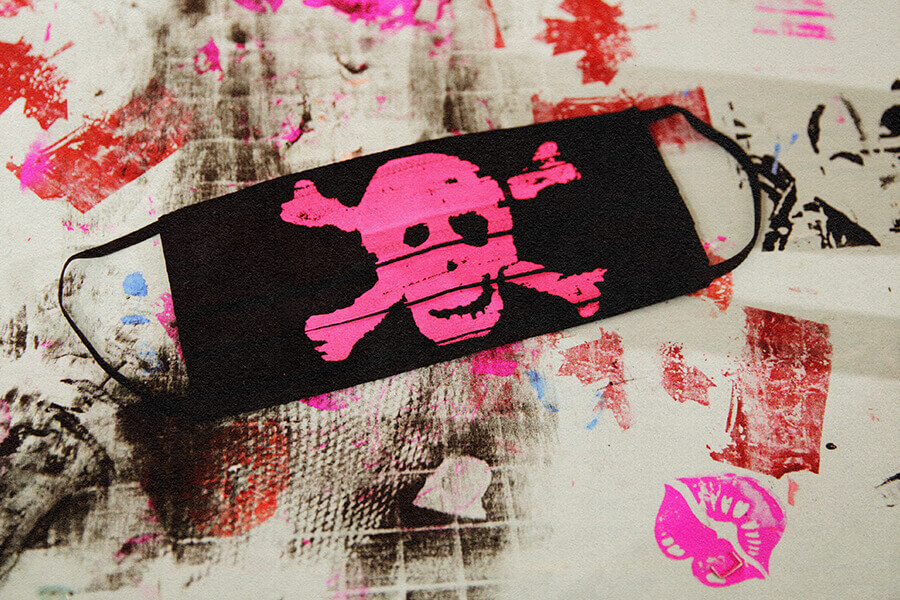 Early on in the pandemic – before face masks became a lucrative side-business option for everyone from clothing companies to hockey equipment manufacturers to tech corps – founder and owner of Queen West’s Peach Berserk Kingi Carpenter initially turned down a suggestion to create her own face masks.

“I said I wasn’t going to do it – who would want them?” Carpenter recalls. “The whole thing seemed so bizarre back in March.”

But when her Toronto sewer sent her a couple of masks, Carpenter decided she might as well try. Known for silkscreened clothes and accessories and upcycled outfits, she printed each mask with different designs she had lying around. She uploaded them to her website at 6 am on April 2, checked her email an hour later and was shocked to see how many orders had already come through.

“Within a few days, I was getting over 100 orders a day, and I didn’t even know what I was doing!” she says. Most of the prints were screens she already had, including a top-selling David Bowie design because she had just silkscreened Bowie curtains for her bathroom.

“One girl wanted a picture of her and her mom, and one person loves raccoons and sent in a picture they took of a raccoon to go on their mask. Others wanted their kid’s drawing,” she says. “Some people told me their kid won’t wear masks unless it’s one from me because they get to have their favourite thing on it.”

Peach Berserk has been a Queen West fixture for over 20 years. When you enter Carpenter’s studio, you’ll find walls covered with eclectic paint-by-numbers collectible artwork. Carpenter has shifted into mostly upcycled creations to avoid textile waste, which works for her because of her working style.

“I have piles of drop cloths, and I’m the world’s messiest printer, so I have all these drop cloths and now we’re making hoodies and skirts out of the drop cloths from the masks,” she says.

Carpenter has continued to receive steady mask orders over the past few months, and has started on custom mask orders for Christmas gifts. “My sewer came by the other day and said, ‘Kingi, you’ve got the world’s best job, don’t you?’ And I said, yeah, I guess I kind of do.”

Check out the full list of this year’s Readers’ Choice winners here.