Author Jason Ramsay-Brown discusses Toronto ravines, his favourite walk and what to see in nature during the winter 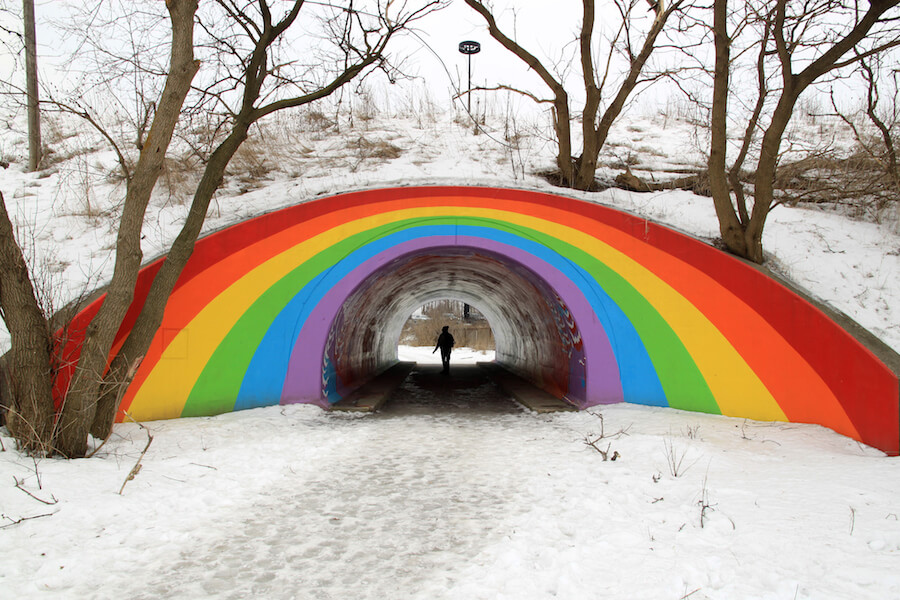 This past summer, feeling cooped up because of COVID-19, I started taking walks through various Toronto parks and ravines. I’ve been writing about them in my Pandemic Walks series. But I wish I’d had Jason Ramsay-Brown’s Toronto’s Ravines And Urban Forests before heading out. In his 2015 book, revised in 2020, Ramsay-Brown takes you through 30 of the city’s most interesting walks and hikes, chronicling the history, terrain and wildlife you’ll find there.

We took a break from our respective walks to talk on the phone.

How did you get interested in ravines and urban forests?

I grew up on the edge of what we would now call midtown, on the southern edge of North York. The Kay Gardner Beltline, the path leading to the Brick Works and the Rosedale Ravine were all within walking distance. I spent time exploring the ravines and realized how much they connected to other parts of the city and how easy it was to get from one place to another. Then, after my daughter was born 13 years ago, I would take her to places as she got older. I wanted to teach her about nature and we’d discuss the things we saw. We’d open up Google Maps, choose a location – some I’d been to before and some I hadn’t. I started blogging about it. The blog led to a NOW Magazine article, and that became a book, and it all just kind of spiralled from there.

Until the pandemic, I hadn’t realized how much greenery there was, and how extensive the ravine system was. Sometimes I would be a block away from a ravine and not know it. Do you hear this a lot?

Torontonians getting around the city by bike or TTC are constantly wondering, “Why is there a dead end here? Or “Why do I have to transfer from this road and then go over somewhere else?” You start realizing it’s because there are these giant valleys that creep through our city. It’s always been easier to build around them. The ravines affect the topography of Toronto and its flow of traffic. In a way they’ve shaped the city, but very quietly.

Unless you know what you’re looking for and are intent on exploring these places, it’s so easy to miss them. They’re always just slightly out of view. That’s usually enough to make a lot of these places feel secret.

That’s an interesting point about things being hidden. Cedarvale Ravine is a popular neighbourhood walk, but I think if the southern entrance had been off a main road like St. Clair and not a block north on Heath, it would be a lot more crowded.

Yes, there are some 150 ravines, and I am still encountering ones I didn’t know existed. There are these tiny areas that, unless you have a reason to go there, you wouldn’t come across. They’re not advertised well. And some of the most beautiful ones are protected by their geography. That’s a good thing, and is something I talk about in the book. You want people to go and see these places, because if they see them they’ll love them, and if they love them they’ll want to protect them. But at the same time, every single visitor to a place comes at a cost to the area. Right now we’re encouraging people to go into these spaces, but not a lot of people know how to behave in these spaces.

I like how you say in the book that wildlife will find spots in the city.

If you were to take all of the ecologically important areas in Toronto and were to stitch them all together, you’d probably have an area the size of two Pearson airports. Keep in mind there’s a difference between a natural area and an ecologically important area. Just a fraction of a percentage of Toronto is ecologically valuable. Think about a bird on a migratory pathway. It can only afford to land if it is absolutely certain it’s going to be able to drink and eat, because otherwise it won’t have enough energy to get back up into the air.

These tiny little areas are very well-populated by animals, because it’s basically all they have left. There are areas in the city where you can see remarkable creatures still clinging onto small niche habitats and fragments of ecosystems. A friend and I sat outside the Todmorden Mills wildlife preserve for an entire night to see the wildlife. We saw deer and coyotes walking down the middle of the Don Valley Parkway. When the city quietens down, a lot of these animals use the human infrastructure to cross from one area to another.

There’s a coyote project run out of Tommy Thompson Park, where they actually track the coyotes and put radio bands on them. The range of these creatures is pretty amazing. They’re found everywhere from the north end of the city to out near Pickering. They know where nature is and how to get from one spot to the next. 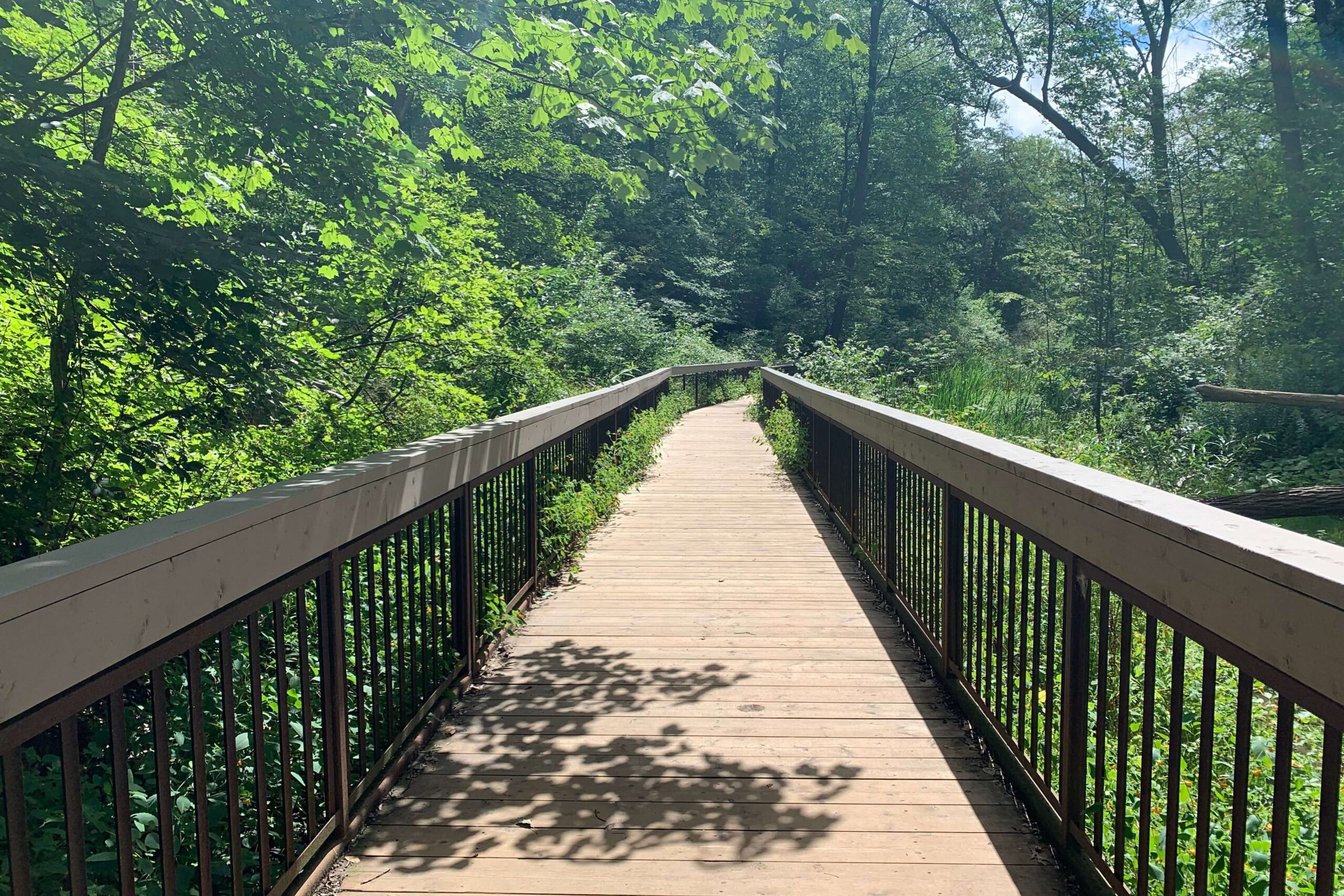 If you walk the Glen Stewart Ravine, you might miss the ancient red oaks.

I’ve found the lack of signs frustrating. When I walked north on the Lower Humber River trail, it ended with nothing to tell you where to pick up the trail again. Does that bother you?

You’re going to get a different answer from everyone. I enjoy the lack of signs. It’s exciting and forces you to develop a natural knowledge and a new way of looking at your city that isn’t just about street signs and landmarks but is about the natural topography.

It can be frustrating if you don’t know where you’re going, but it’s virtually impossible to get lost in the city. No matter where you go or what you do, if you keep following a trail you’ll probably end up in civilization. Google Maps was such a game-changer. You can plan out a walk and look at the satellite view and get a great sense of where to go. It’s all part of the sense of adventure and exploration.

On the Humber trail, there’s a plaque telling you about Hurricane Hazel. But if go to a bridge in King’s Mill Park there’s a small brass plaque that looks like a wave. It indicates the water level the night of the hurricane. A local kept drawing marks on the bridge, and the city would erase them, until they realized it wasn’t graffiti. But there’s nothing telling you what the wave symbolizes.

And in Glen Stewart Ravine, I’ve always been interested in the red oaks there. They are so genetically precious – they are literally some of the oldest inhabitants of the city, and they’re part of a genetic line that goes back to the last ice age. People walk by these ancient trees all the time and never give a moment’s consideration to the fact that these are the last grandfather trees from a genetic legacy going back 10000 years. Those are the signs that I sorely miss.

In the updated edition of your book, there’s a section about community involvement. I’ve noticed in a few of my walks how volunteers are helping to protect these places. Is this something we should be doing more?

I’m part of the Toronto Field Naturalists, an organization that goes back to 1923. The group’s mandate has been connecting people with nature and helping them to organize a voice in support of these areas to protect them. There’s a lot of passion and knowledge in these organizations. There are also lots of community stewardship programs. For me, there is no single better way for people to connect with these areas than to be a part of a stewardship group, to help enhance nature and plant native trees. You get a physical sense of connection. You walk by 10 years later and there’s that tree you planted and it’s now five metres tall and full of butterflies.

You’ve got thousands of volunteers in the city who want to protect, enhance and grow nature, and there are only a limited number of city staff to manage them. So stewardship is something that i deeply encourage people to participate in.

Do you have any favourite Toronto ravines and forests?

If i had to choose one without knowing someone’s interests or their mobility, I would recommend is Gates Gully in Scarborough. It’s a one kilometre trail that leads down to Lake Ontario and cleaves between the bluffs.

There’s something for everyone. The history of that area is so rich. It’s the only place in the city you can actually see a shipwreck from the coast. There are endangered bank swallows nesting along the bluffs. There are lots of old trees, rare plants and some rare animals. There’s an artist connection, since the artist Doris McCarthy lived at the top of the bluffs – the trail is named after her. There’s sculpture at the lake – probably the best example of art that’s suitable for our natural area since they didn’t take out any habitat to put it there.

What to do in winter

Winter is coming, and our winters are usually cold and long. How populated are these Toronto trails and ravines during the winter?

Surprisingly, they can be quite well travelled. Get yourself a pair of icers, which strap onto your shoes or boots and give them a grip, and you can walk around in a lot of these areas. You’re going to see things you wouldn’t see any other time of year. With the leaves off the trees, you’re getting a completely different view and perspective of what these areas are like.

Don’t underestimate what you can see in the winter. Not everything hibernates. It’s a great time to go around and look for little creatures. If you’re near a body of water, like Tommy Thompson Park, look for ducks and water fowl and have your camera ready.