LUMINATO 2017 - THE FAMOUS SPIEGELTENT, a near century-old pop-up venue featuring performances from Notes of a Native Song, Ghost. 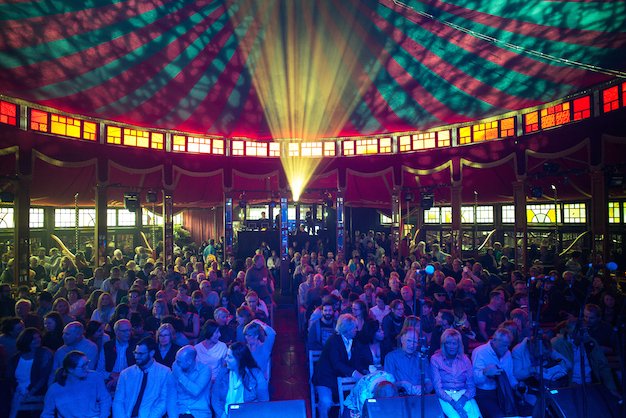 Originally constructed in 1920 by master craftsmen Oscar Mols Dom and Louis Goor, The Famous Spiegeltent has spent most of the past 90-plus years housing a wide range of music, theatre, spoken word and cabaret performances across Europe. There are very few of these structures still traveling the world today.

From June 14 to 25, The Famous Spiegeltent will take over David Pecaut Square as part of Luminato 2017, with free outdoor programming, a licensed patio and nightly performances featuring the following artists and more.

For more on this years festival, visit the Luminato x NOW Digital Residency.

The mind and work of James Baldwin is enjoying a cultural resurgence currently, highlighted earlier this year with the release of a documentary on the inimitable intellectual (see our 4-N review). Over four performances at Luminato, Baldwin also serve as the inspiration for a rock song cycle to be performed by Stew and The Negro Problem. These songs were cowritten by Baldwins longtime collaborator, Heidi Rodewald, and they will be blended with video and spoken word that celebrates Baldwin’s critical eye.

Created by Obie Award winners Half Straddle, Ghost Rings combines dramatic storytelling with pop concert energy. The magical realist tale with a feminist bent looks at friends and family, and is inspired by playwright/performer Tina Satters real-life relationship with her sister. Ghost Rings will be performed three times at Luminato under The Famous Spiegeltent, from June 20 to 22.

Formed in 1998 by Rosina Kazi and Nicholas Murray, LALs electronic music draws inspiration from West Indian and African rhythms. Their June 17 Luminato performance is likely to transform The Famous Spiegeltent into a celebration of infectious beats and social activism, with live digital imaging to complement tracks from their latest album, Find Safety. Through their music and political participation, LAL actively supports Black Lives Matter as well as the LGBTQ community.

Channeling the greats of the silent movie era, including Charlie Chaplins iconic Tramp character and the charming antics of Buster Keaton, Compagnia Baccala will perform its award-winning Pss Pss show under The Famous Spiegeltent four times over two days (June 17-18). Collaborators Camilla Pessi and Simone Fassari were trained at the Teatro Dimitri School in Switzerland. Years later, their Pss Pss show has been seen over 600 times in 50 countries, to much acclaim.

Hailing from Salluit in northern Quebec, Elisapie now calls Montreal home. She maintains her roots in Inuit culture through music and storytelling, both of which are on display in her albums There Will Be Stars (2010) and Travelling Love (2012). Her creative talents can also be seen and heard in the 2003 NFB documentary If The Weather Permits and on the soundtrack for the 2013 animated film The Legend of Sarila. During her June 22 performance at Luminato, she will perform a musical set in Inuktitut, English and French.

Making their Canadian premiere, Rusangano Family is an Ireland-based, three-man group of two emcees (God Knows and MuRli) and a DJ (mynameisjOhn). They bring together roots from Zimbabwe and Togo in a hip hop-infused performance style that takes aim at issues surrounding identity and belonging. Winners of a 2016 Choice Music Prize for Irish Album of the Year, Rusangano Family also made waves at SXSW last year with tracks from Let the Dead Bury the Dead. They perform at Luminato on June 23 and 24.

Shara Nova of My Brightest Diamond is a versatile composer and musician who has collaborated with the likes of The Decemberists, David Byrne and Bon Iver, to name just a few. Her recently released fourth album, This is My Hand, offers up driving electronic rhythms with innovative rock instrumentation. Both June 24 and 25 performances at Luminato will showcase My Brightest Diamonds full sonic landscape under The Famous Spiegeltent.

Ian Kamaus June 24 Luminato performance will launch The Residents Project, a partnership between the festival and The Theatre Centre. The Toronto-based poet and hip-hop artist continues to be an active voice in Torontos music and activism communities, as demonstrated by his insightful contribution to our Racism in Music project last year. His recent work tells the story of his grandmother and discusses his mental health issues.