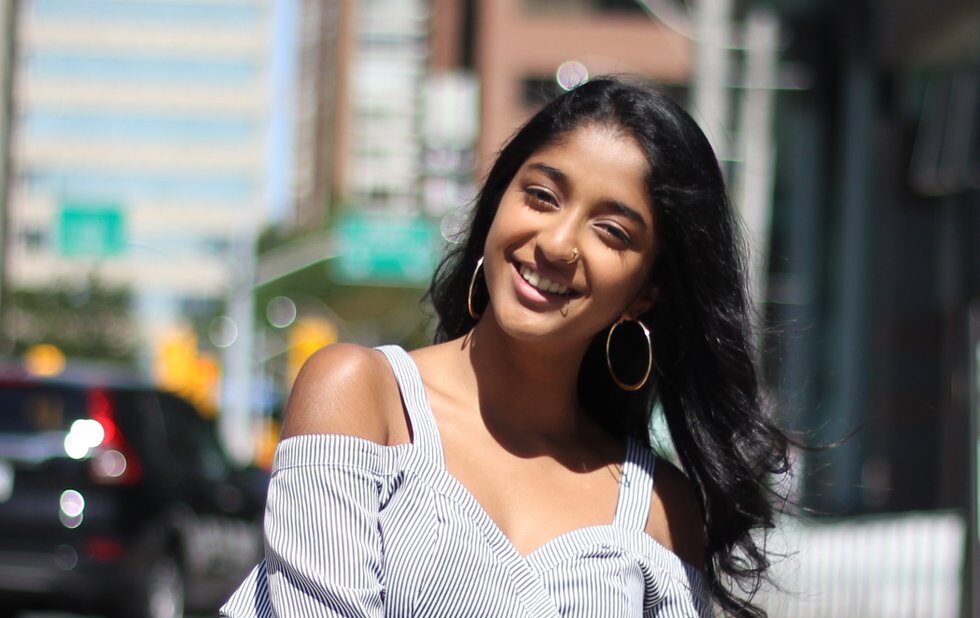 Maitreyi Ramakrishnan is not planning to shorten her 20-character name for public consumption.

“If you can say the character names in Game Of Thrones, you can say my Tamil name,” explains the Mississauga-born-and-raised teen who has been cast as the lead in Mindy Kaling and Lang Fisher’s upcoming Netflix series.

The 17-year-old self-professed Disney fan is having a Cinderella moment after being cast as Devi, the lead in the untitled comedy show. Ramakrishnan won the part over 15,000 who submitted auditions to Kaling’s open casting call in April.

The coming-of-age series, which is in production in Los Angeles, is about a first-generation Indian American teen and loosely based on Kaling’s childhood. The comic writer and actor, who is half Indian-Tamil and Bengali, is among the few role models for girls of South Asian descent in Hollywood. And now her work is making room for even more.

“In terms of actors who are South Asian that I could look up to, I feel like there’s not enough yet,” says Ramakrishnan. “If there’s not many out there already, then I guess I should be there.”

Speaking over the phone from Beverly Hills, Ramakrishnan already sounds like she’s adjusting well. Or rather, she sounds like she can adjust well to anything. She’s young, extremely positive and quick with humour. She sounds every bit like the girl comfortable enough to finish every take at a Hollywood audition with a dab, as Poorna Jagannathan, the Big Little Lies actor who plays Devi’s mom, recounted in a recent interview.

“I probably definitely dropped a dab out of nervousness,” says Ramakrishnan. “A little old casual side dab.”

Ramakrishnan, who eventually plans to attend York University’s theatre program, only decided to pursue acting in the last year. She’d always dreamed of being an animator, following through on her love of Disney and Marvel Comics. But she was bit by the acting bug in her final year at Meadowvale Secondary School.

For her grade 12 drama class, she had to write, direct and produce a play. She mounted the production 0006, a thriller about how society pits women against each other when they should be helping each other rise up.

“It came so naturally to me,” says Ramakrishnan about that creative process. “I was like, I could totally do this for the rest of my life.”

The auditioning process for the Kaling/Fisher series began while Ramakrishnan was getting ready to star as Velma Kelly in her school’s production of Chicago. One of her best friends, Shaharah Gaznabbi, encouraged her to answer Kaling’s casting call. Together they put together a self-shot audition tape. Not long after, they got an email requesting four more video submissions.

“I have no idea how auditioning for professional shows work,” Ramakrishnan explains, assuming at the time that the bar must have been really low for callbacks.

“Maybe like 10,000 people got the callback. I was like, ‘Whatever, it’s not that special.’ But when I got the email saying ‘Can you come to L.A.?’, me, my best friend and my whole family flipped out.”

The ride since then has been a roller coaster. First, the family had to verify that the casting email, from a generic gmail address as opposed to a studio account, was legit. Her father, Ram Selvarajah, was nervous about that. They also had to find an agent and work out travel schedules, figuring out which parent could suddenly secure vacation time to escort their daughter to Los Angeles.

“Everybody really Avengers Assembled up,” says Ramakrishnan without flinching, as if that were an expression I should just readily embrace. “Yes, I said that!”

Ramakrishnan’s father escorted her to the first audition. It was their first time in Los Angeles, so they were total tourists taking in Grauman’s Chinese Theatre, Universal CityWalk and a bus tour.

“Bus tours are great,” says Ramakrishnan, with a tone of gentle sarcasm even though she probably did enjoy the hell out of it. 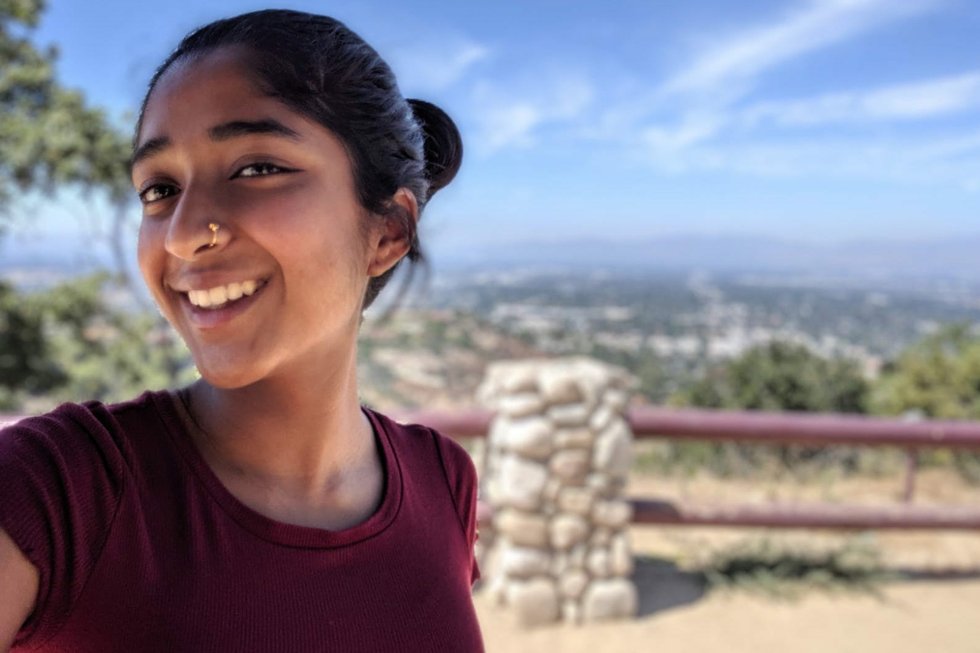 Maitreyi Ramakrishnan takes a selfie on the Hollywood Hills.

She doesn’t remember a lot from the audition, or perhaps the non-disclosure agreements she had to sign are forcing her to be coy with details.

“I do remember walking in and telling Mindy that there are so many palm trees,” says Ramakrishnan, who explains that she tried to treat the audition like it was for a school play. “I walked in feeling those excited nerves, the good kind of nerves with the adrenaline rushing. And I walked out thinking, ‘If I don’t get it, I don’t even care.’ I had no regrets with my audition. I was just like, ‘This is awesome.'”

Ramakrishnan got called back for a chemistry read with Jagannathan, who went on to sing the young actor’s praises.

“Maitreyi is this character,” Jagannathan told Refinery29. “Smart, unaffected and ridiculously funny without meaning to be.”

In May, Ramakrishnan’s agent told her they needed to meet for an important phone call at 9 pm.

“She made it seem like there was some technical stuff to do with the audition. We dashed home and my agent whips out her phone, is calling this number. And she’s telling me, ‘Make sure you hear exactly what they say. They’re going to tell you a number. Write it down.'”

With a scrap piece of paper and pen in hand, Maitreyi heard Kaling and Fisher’s voices over the phone. She was still thinking they were about to give her new instructions for auditioning.

“And then they hit me with, ‘So we just want to congratulate you on the part of Devi.’ And I was like, ‘Oh, oh wow. My life is changing.'”

She describes her frozen shock and her family in the background screaming – the call had come through on speakerphone. “It was a whole event.”

Ramakrishnan was cast in May. The rest of us didn’t find out until Netflix announced in July. What immediately stood out in the press release was that it described Ramakrishnan as a Tamil-Canadian.

“I made it very clear to my agent and publicist that Tamil-Canadian is very, very important to me,” says Ramakrishnan, who made sure her ethnicity and nationality were spelled out exactly that way in the announcement. She didn’t simply say Canadian. Nor did she say Sri Lankan.

Like so many Tamil-Canadians, she comes from a family that escaped war in Sri Lanka and arrived in Canada as refugees. We typically refuse to identify as Sri Lankan because that would mean claiming a country that tried to wipe out our people.

“That’s not my country. My country is Canada. But my culture is definitely Tamil.”

“You know our stories,” says Ramakrishnan’s mother Kiruthiha Kulendiren. “We’re displaced not by choice but by circumstances.”

Ramakrishnan didn’t really learn about Sri Lanka’s politics and war until after age 10. She wasn’t even aware of it when she was protesting on the Gardiner Expressway a decade ago with her older brother and parents. Alongside the Tamil community, they were desperately trying to raise awareness about the war crimes happening back home.

“We consciously raised them so that our stories wouldn’t define them,” says Kulendiren, who points out that the only reason her kids were with her when the Tamils stormed the Gardiner is because it was Mother’s Day.

“That was my first protest,” says Ramakrishnan. Her most recent was the student walkout protesting Doug Ford’s cuts to education.

For the Tamil-Canadian community, a significant population in the GTA, Maitreyi Ramakrishnan leading a Netflix series is huge.

She’s our next generation, born in Canada to parents who spent a significant portion of their lives here. Her generation can keep in touch with Tamil culture while maintaining some distance from the politics and trauma back home. She was raised within a multicultural landscape, taking lessons in bharatanatyam and ballet, growing up on hoppers and memes.

She’s also our only representation in Hollywood. She can be my daughter’s role model.

“I want other Tamils all over the world to feel pride that Tamil people are making it,” says Ramakrishnan. “We are doing it. And we are awesome.”