If you slowed down to think too hard about 21 Bridges, the whole thing would collapse. The gaps in logic are just a bit much to bridge in this cat-and-mouse thriller about an NYPD detective shutting down Manhattan to trap a pair of cop killers.

Thankfully, the movie rarely takes a breath. 21 Bridges is propulsive and entertaining, aspiring to mimic the clockwork thrills of F. Gary Gray’s The Negotiator and the grit of Joe Carnahan’s Narc (Joe’s little brother Matthew Michael Carnahan is a writer here). Though it falls short of these, the attempt to reclaim an action sub-genre that just doesn’t get made anymore (without Liam Neeson, at least) is appreciated.

The movie falls in line with distributor STX Entertainment’s entire brand, creating mid-budget adult-friendly content that Marvel and its like has since crowded out of theatres. Ironically, Marvel’s favourite directing duo, Joe and Anthony Russo (Avengers: Endgame), are attached as producers here.

Yes, the flaws spill over in 21 Bridges: among them are the stretches in plausibility and an earnest tendency to be both as gritty and widely appealing as possible (pick one!). But it muscles through with movie star swagger brought to you by Black Panther’s Chadwick Boseman and Scarborough’s own Stephan James.

Boseman is Andre, the homicide detective who has built a reputation for capping suspects he insists were posing a threat. For that very reason, J.K. Simmons’s police captain puts Andre and Sienna Miller’s narc in charge of a manhunt. A drug heist gone wrong leaves several police officers dead and an entire force is calling for the culprits’ heads.

The gunmen are former Marines. Taylor Kitsch plays the more maniacal of the two, Ray, who is largely responsible for the casualties. Ray still earns some empathy – despite his body count – thanks to an easy-to-overlook performance from Kitsch, who has always been a high-calibre character actor fizzling out in movies that flop.

As Michael, the too-good-to-be-true criminal with a heart of gold, James is rock-solid. He’s the classic movie fugitive: desperate and highly resourceful. He’s not innocent, but he’s nice enough that we don’t want the noose around his neck to tighten.

James brings the same emotional force and vulnerability he showed in If Beale Street Could Talk. But he balances that with leading action star chops: the man runs like hell and knows how to stunt behind a weapon. 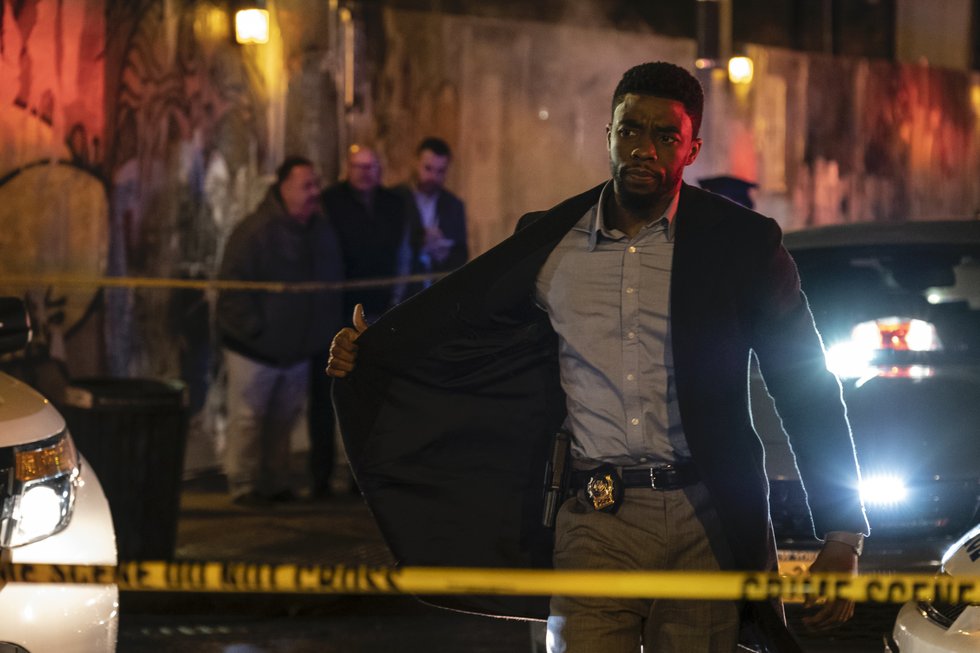 James pairs great with Boseman. The Black Panther star puts a Denzel bounce in his step, taking charge of every scene and giving us so much character with his aura and the way he bites his lip that you wonder why the screenplay tends to over-explain. There’s a whole backstory to Boseman’s character introduced in a prologue that could have been scrapped entirely. We already feel the weight of history on the man’s shoulders. Boseman swings that weight with some great line readings, as when he confronts a fellow officer with, “You better have perfect diction calling me a ‘trigger.’”

21 Bridges doesn’t overplay its racial makeup. This is a rare action movie starring two Black leading men. The movie never feels like it’s trying to make or prove a point with its casting, nor that race is all that relevant to its subject matter. But it’s also not ignorant to what its casting means: this becomes a movie about one Black man trying to stop an entire police force from shooting another, whether he’s guilty or not.