Review: Netflix’s Red Notice feels like its own deepfake

Dwayne Johnson, Ryan Reynolds and Gal Gadot do the things they're known for doing in big, busy action-comedies 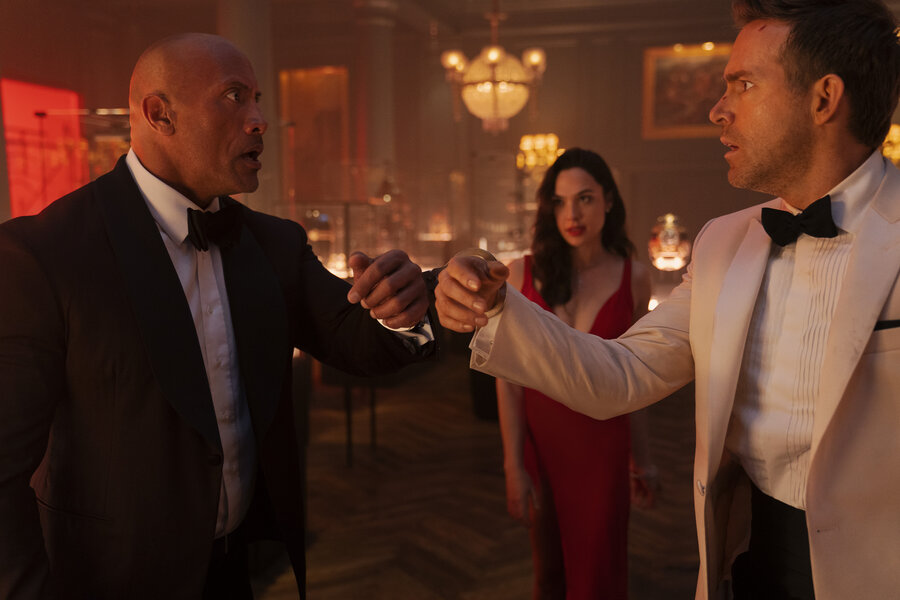 Red Notice is a movie where Dwayne Johnson, Ryan Reynolds and Gal Gadot play characters who run around the globe looking for the legendary treasure of Cleopatra, insulting each other and occasionally commenting on how wild all of this stuff is, just so we know not to take it seriously.

It is very expensive, with lots of location inserts even though most of the picture was shot on sound stages in Atlanta. (The lighting is kind of a giveaway; the cinematography has that signature digital crispness of a movie with a lot of green-screen.) There are many action set pieces, all of which are busy and some of which are even fun. The story does its best to keep us on our toes, as the protagonists switch allegiances at the drop of a hat while Ritu Arya’s buzzkill Interpol agent does her best to crash the party.

It’s two hours long, so it’s definitely a movie. It’s also the only movie I’ve seen this year that feels like its own deepfake – a film where almost every aspect has been calibrated for peak familiarity and ease of digestion. It’s the feature version of that Twitter meme: “did… did an algorithm write this?”

Rawson Marshall Thurber, who previously directed Johnson in the perfectly cromulent In-Laws clone Central Intelligence and the less successful Die Hard knockoff Skyscraper, is the writer of record here, and also the director. The end credits list the names of hundreds of professionals. But you can be forgiven for thinking Red Notice just appeared, fully formed, on the Netflix servers, after everyone authorized the appropriate use of their likenesses. It is a movie determined, in each and every frame, to deliver a comforting, familiar experience, the platonic ideal of an entire genre.

The script is a mash-up of every self-aware heist picture since Steven Soderbergh revitalized the genre with his Ocean’s trilogy, along with some yammering about archaeology (and a couple of other things) you’ll recognize from Raiders Of The Lost Ark and its sequels. There’s a masquerade ball, which is briefly funny for the notion that someone as distinctive as Dwayne Johnson could ever go unnoticed, and a scene where Johnson and Reynolds blunder into a bullfight because why not, CG animals are easy enough these days.

No one is being asked to do anything difficult, really; just hit the right marks, follow the action choreography, snap off the dialogue and look good doing it. It’s polished and speedy, and I’m sure a lot of people will enjoy watching it, because who doesn’t like these actors doing the thing for which they’re best known?

If you liked watching Johnson as an indignant but hyper-capable action figure in the Fast & Furious movies, here he is doing exactly that. If you’re into Reynolds’s wide-eyed sarcastic thing while jumping around like an idiot in the Deadpool movies, he’s doing that here as well. And if you’ve enjoyed Gal Gadot as an action bombshell who’s smarter than the dopey boys around her – yep, you guessed it, that’s her thing here too.

I just wish I could cite a single moment that made me laugh out loud, or surprised me, or got my heart racing the way any of the movies Red Notice has digested – and is now regurgitating – did when I first saw them. You might have a better time, especially if all you’re doing is looking to kill two hours with a big, busy action comedy. Just make sure you check the back of your neck for a data port afterward… because if there are movie theatres in the Matrix, I guarantee you this is the movie playing in them.