NOW MagazineMovies & TVReviewsReview: Onward takes a while to get to its magical conclusion

Review: Onward takes a while to get to its magical conclusion 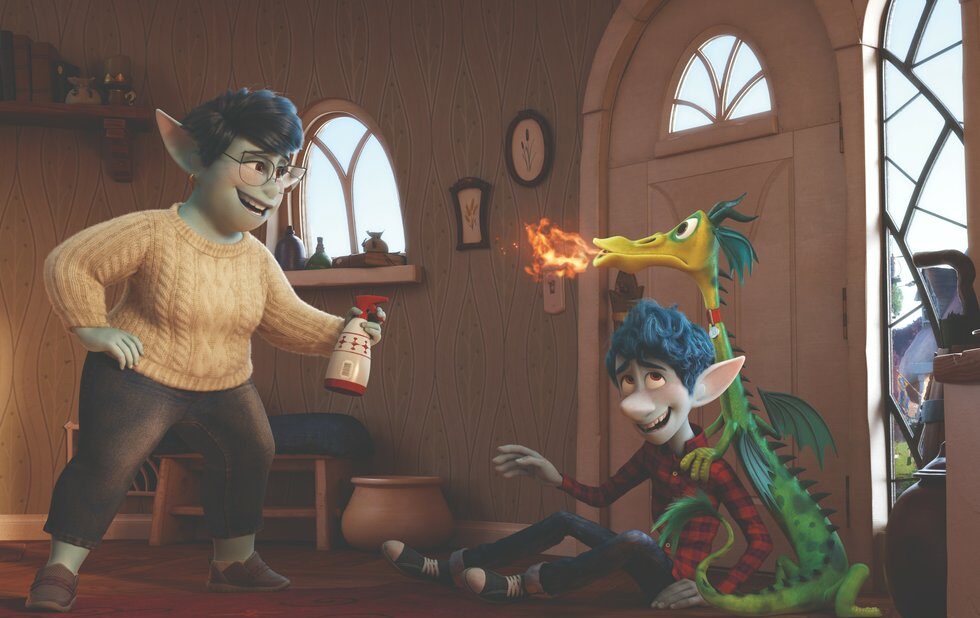 Pixar’s Onward is one of the studio’s odder movies in a while – a film about a new generation struggling to recapture the old magic, made by the next wave of digital storytellers. (It’s also about fathers and sons, because of course it is.)

Onward also comes saddled with one of the hardest sells in a while: as opposed to the simplicity of “toys come to life” or “the monsters of your childhood nightmares are just ordinary working stiffs” or “filthy vermin wants to be a French chef.” The elaborate conceptual conceit of Dan Scanlon’s CG road picture requires a great deal of world-building – and not all of it is necessary.

Scanlon’s story takes place in a world where fantasy creatures like elves, sprites, centaurs and cyclopes developed technology and forgot the sorcery of their ancestors – which means it’s set in the recognizable middle-American exurbs with smartphones and freeways and burger chains.

See, before he died, Wilden Lightfoot devised a spell that would bring him back for a day, to see the people his sons would become. Poetic as that idea may have been, it’s a little less elegant in practice, since neither Barley nor Ian has actually practised magic. The spell only brings him back half-way, as a quasi-sentient pair of legs (it’s easier to see than it is to explain) and restoring him fully before his day runs out requires an especially rare enchanted gem.

Fortunately, Barley lives and breathes the old legends – which he insists are all historically accurate – so he and Ian set off on a quest while their understandably worried mother Laurel (Julia Louis-Dreyfus) races to track them down, thus embarking on her own, somewhat less deeply considered journey.

The story is simple, the stakes clear and the emotional underpinnings strong, so it’s baffling why the first hour of Onward seems to do everything it can to clutter things up, layering its world with details and secondary characters that, for all the invention on display in design and story mechanics, add almost nothing to the movie’s impact.

There are a couple of supporting players that work really well – Octavia Spencer has a lot of fun with the role of a fearsome manticore whose life has taken a few decidedly un-fearsome turns. And Mel Rodriguez is very nicely used as Colt Bronco, Laurel’s new boyfriend, who is trying very hard to respect her kids’ boundaries, but is also a centaur and thus taking up a lot more literal space than maybe he should.

That metaphor – helped along by the comic incongruity of a horse-man clomping around a house scaled for people-sized elves – is the one time Onward seems to fully realize its weird mashup of fantasy realms and everyday humanity. But this story isn’t about Colt Bronco it’s about the Lightfoot siblings, and their relative normality winds up working against the story’s magic.

At more than one point I found myself wondering whether Onward might have worked better if it took place in a “real” world populated by humans, and then realizing that it almost certainly would. Holland and Pratt’s voice performances are so pure that the pointy ears and cotton-candy hair just seem like fancy add-ons the elvish trappings also do nothing at all for Laurel, who seems to have a lot more going on than the movie is prepared to unpack. A non-caricatured face, even in CG, would be so much more interesting matched to Louis-Dreyfus’s complex voice work.

But then there’s the final act, which is staggeringly well-crafted and emotionally devastating, as Scanlon (who made Monsters University) wrangles all of his scattered themes and narrative threads to a powerful payoff. If all that matters is whether a movie sticks the landing, Onward does that better than most other recent Pixar films – which, I guess, means it does recapture the magic after all, and even wields it in a manner that feels smart and meaningful.

It’s just that this time around, the journey pales next to the destination.