When your bandmate is also your bedmate – TRP.P, LAL and Rapport talk boundaries, collaboration and how to handle fights 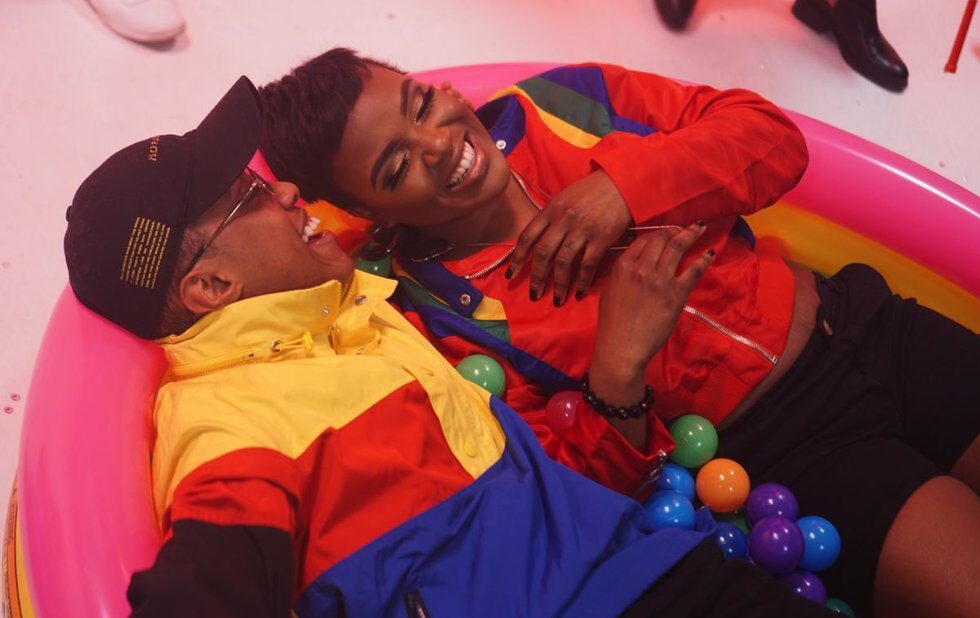 pHoenix Pagliacci left the hip-hop group The Sorority last year to focus on this project with the producer Truss. Together, the engaged couple mix R&B, hip-hop and soul to create music as passionate as their relationship. And, as they tell us here, their personal and musical relationships are very connected.

How does being in a relationship affect how you collaborate as musicians?

Truss: It heightens our chemistry in every aspect. Our love and respect for each other, holding space for vulnerability and creating without worrying about what we look like doing it, is always at the forefront. And vice versa. Because of how much we appreciate each other’s talent, it makes loving each other easy, too.

Pagliacci: The moment I say anything in a relationship context, whether good or bad, people will automatically assume the song is about Truss. It can box me in, writing-wise. People may roll their eyes at another love song or social media posts about how much I love Truss, but they will also enjoy the songs we write about other aspects of life that don’t exclude single people. The best part of it all is being able to share the experience from creation to performance with the one you share your life with.

Pagliacci: We have a stronger connection in terms of understanding what our sounds are. Truss will be engineering me in the studio and hear in my voice when I’m frustrated with my delivery. He knows to pull me out and take a 10. He also knows that I love my harmonies and is always prepared with the right number of tracks. Vice versa, I know when Truss is producing to leave him alone and not interject with my two cents. The ebb and flow of our creative process is very natural, much like our day-to-day interactions.

Have you ever made art about your relationship? What’s it like creating that art together?

Truss: Yes we have, about the active parts mostly. It’s all in good fun, it’s almost like challenging each other with whose lines have shock value, who’s clever enough to portray what we’ve all heard before in a fresh way. It makes me feel like a kid doing show and tell – so excited to share our ideas about each other, to each other.

pagliacci: Our last album 2TRP.P featured 2 songs in particular about our relationship: .mp4 Play and Body +. The writing process is cute because we wrote our verses separately, then came together and shared them – kinda like vows. It’s tricky when we want to share songs like that with other people, especially my brother, who always lets me know how gross it is that his older sister is getting some on the regular.

Do you try to separate your personal partnership from your artistic/business partnership? Why or why not? How do you handle fights?

When it comes to fights or disagreements, I am very strong-headed and will say exactly how I feel. It makes it awkward if we have a show or rehearsal with the band, because I wear my emotions on my face. But we agreed when we got engaged that we’d never leave each other’s presence without saying that we love each other, no matter how we feel in the moment. I may have a song about that coming out on my next solo album.

Truss: I think we try to separate the music from our personal lives but it’s becoming harder and harder the deeper we get into this thing. It shows up in our daily conversations. Sometimes it the first thing out of our mouths when we first see each other for the day instead of greeting each other. But this is the life we chose. This is our career and we understand that nobody’s stopping us from achieving our goals – not even each other. 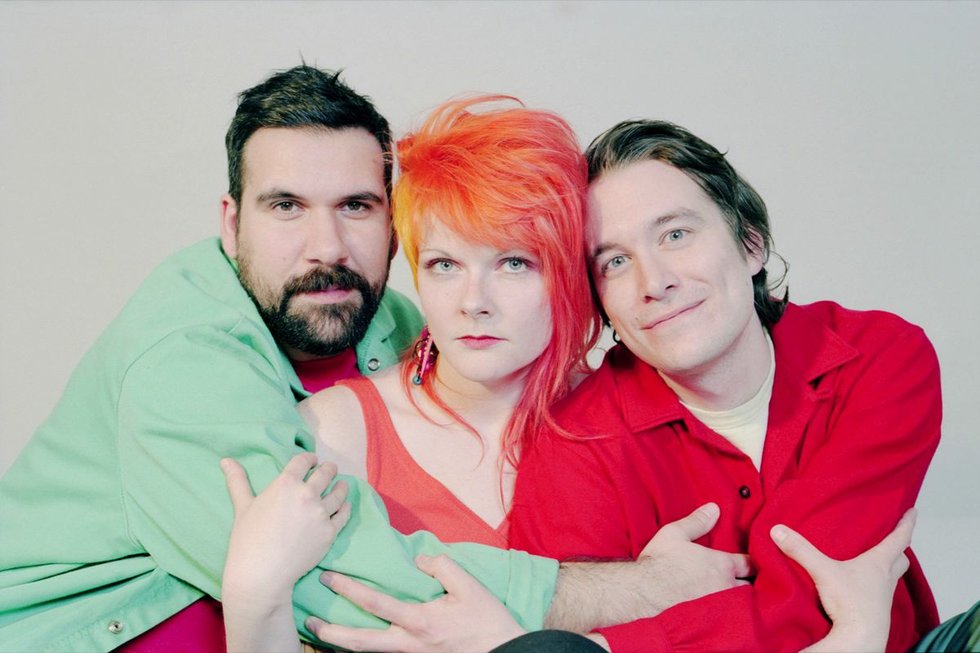 Mike Pereira (left) lives and makes music with a couple: Maddy Wilde (middle) and Kurt Marble. Together, they are Rapport.

Maddy Wilde and Kurt Marble formed their 80s-indebted indie pop band Rapport in the fall of 2017, after dating for two and half years and playing in other projects. They then recruited their long-time friend and multi-instrumentalist Mike Pereira, to round out the group. The trio released their debut EP, In The Dark, last fall. Wilde and Marble talk about how their relationship has made them better collaborators, both with each other and in general.

Wilde: Kurt is the most honest person I’ve got in my life, so he’ll just straight up let me know when a song idea isn’t working. He’ll say it right to my face! It’s helpful, cause it means he really, truly likes the good stuff I come up with. Having Kurt around as a collaborative music partner has helped me significantly with showing my work to other people. I used to be so terrified! I just needed someone in my life to sit there and laugh at my weird GarageBand ditties and say “I don’t know where the hell you’re going with this idea…” It comes from a place of love!

Marble: I typically don’t collaborate very well with others. I have a hard time giving or taking criticism – constructive or otherwise – but with Maddy I have no trouble expressing my feelings and she claims to love me unconditionally, so that helps.

Marble: Madd Dawg and I used to have a one-week deadline where we would write a song and show those songs to each other. Almost all my songs were corny love jams for Maddy. What can I say? I’m a pretty romantic man.

Do you try to separate your personal partnership from your artistic/business partnership?

Marble: We like to start each band practice with an exchange of flowers and chocolates, followed by a courtship dance. Otherwise, the songs just won’t sound right.

Wilde: It’s important for us to both do our own things outside of the band, whether it’s other musical projects (we’re both in a few other bands), Dungeons & Dragons (Kurt’s a DM) or making comics (me). I think if the band was the only thing we did together and apart from each other, we’d go nuts. We really celebrate and encourage our two separate creative paths.

How do you handle fights?

Wilde: Things can get tense when we’re both stressing over band stuff. But it’s actually helpful to be in this together. We can come up with a plan of action and sometimes one person can assign the other specific tasks and vice versa.

Marble: It’s nice to have our bandmate and BFF Mike Pereira around to keep us in good spirits and be our referee. We don’t like to fight in front of our boy.

Rapport play as ABBA as part of Death to T.O. On Valentine’s Day, February 14 at Lee’s Palace. More info here. 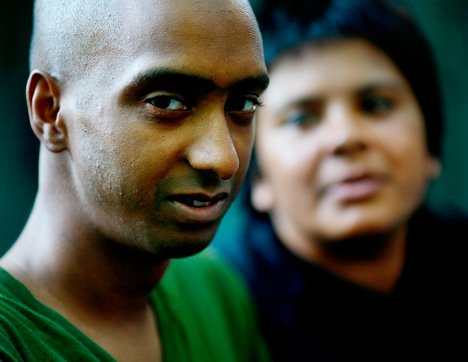 Rosina Kazi (left) and Nicholas Murray a.k.a. Rose and Murr of LAL.

Rosina Kazi and Nicholas Murray have been together for 25 years and making music as LAL for 20. They also run the venue and community space Unit 2. LAL will celebrate their 20th band anniversary with a full performance of their debut album, Corners, at Wavelength Winter Festival. Their music and personal relationships are perpetual works in progress, allowing them to put all of themselves into both – which sometimes can get overwhelming.

Kazi: It’s been so long that I’m not sure. I think it deepens our collaboration and also our relationship. I don’t work with many producers, and definitely not in the way I work with Nicholas. I trust him completely as a human, and the music we make is sacred for me – it’s my way of dealing with the world and my own shit. So I can only really do that with people I trust and feel comfortable with.

Murray: In the beginning it was all fun and games. We were just really happy to be making music together. As we became more skilled, we started to make more demands of each other. We try to set up boundaries of how we should talk to each other. We can be very mean. Being a couple means that you have a direct line to ego. It is still a work in progress.

Kazi: We duke it out, we go in and are super honest. I am mad identified so I can definitely lose it and get very emotional, so smoking weed helps. We both try not to be mean, though people are usually shocked cuz we’re like best friends so we talk a lot of shit to each other. It’s mostly in fun, though we are working on not always being that way. We revert back into our youth 90s Toronto slang mode.

Kazi: If I do work with producers, they usually send me tracks and I write to them. With Nic, he’ll create something and then if I love it we’ll write together, or we’ll create an idea while in the same room it’s much more intimate and chill. Not awkward, though sometimes we fight over style and tempo.

Murray: When I make ambient music or instrumental dance-floory stuff, I appreciate the freedom of just going with my own sensibilities. I rarely work with other singers, usually only via remixes or file exchange or sometimes live performance. Rosina is a very unconventional singer and has an originality that has spoiled me through the years.

Kazi: We have very different ideas of what we want to bring. I’m more punk, poetry and folky (international folk forms, too) and he’s more hip-hop and jazz. Electronic music, especially techno and weirdo sounds, brings us together.

Kazi: I think our whole career is a reflection of our relationship and community. Lyrically, there are always references to our love and our struggle for each other and also what we face in the world. As BIPOCs, and for me identifying as gender-fluid/queer, there’s a lot we deal with, but there’s also amazing love and hope, so our relationship mirrors all of this. Creating music with Nic is beautiful, frustrating, tense and loving, easy and hard. On stage we are generally in our own worlds, but our energies have connected for 25 years and we just do what we do.