Life on the road suits these prairie rockers just fine 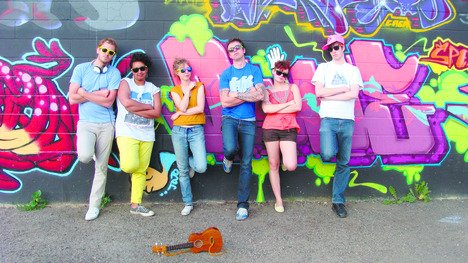 It’s all too common for young bands to go on extended tours in support of their debut album and then end up with no time to write songs for their follow-up. Luckily, Regina’s Rah Rah have found the opposite to be true.

“Touring is a really good way to find out who you are as a band,” says multi-instrumentalist Erin Passmore as the band makes its way to a gig in Sudbury.

“The first album was recorded over six months, and it was kind of agonizing. We were all in school, so we were going in separately to record our parts. This time we only had two weeks, and we ended up recording 17 songs.”

This burst of creativity is partly explained by the whole band’s involvement in songwriting their 2008 debut, Going Steady, was written primarily by guitarist Marshall Burns. The new record (tentatively named Breaking Hearts on Young Soul) expands beyond the debut’s indie folk vibes to incorporate a wider range of moods.

Recording in a Montreal studio further energized the sessions, as the six-piece finally had a chance to catch some of their favourite international acts live. (“Normally in Regina, we’d have to drive two and a half hours to see a band like TV on the Radio,” Passmore says.)

But this new Montreal connection probably won’t do much to discourage the somewhat misleading Arcade Fire comparisons. Sure, the Saskatchewan six-piece has a similar collective vibe and an affection for gang vocals and oddball instruments, but Rah Rah are much more cheerful and exuberant.

For instance, you don’t see Arcade Fire getting worked up about confetti.

“If the venue doesn’t frown on the use of confetti canons, we’ll shoot off a few during the set,” Passmore says. “We’ve spent a lot of time figuring out where to get the best poppers. Normally we go for shiny confetti, but we haven’t been able to find it lately.

“We always offer to clean up afterwards, though, so the bar staff doesn’t hate us.”