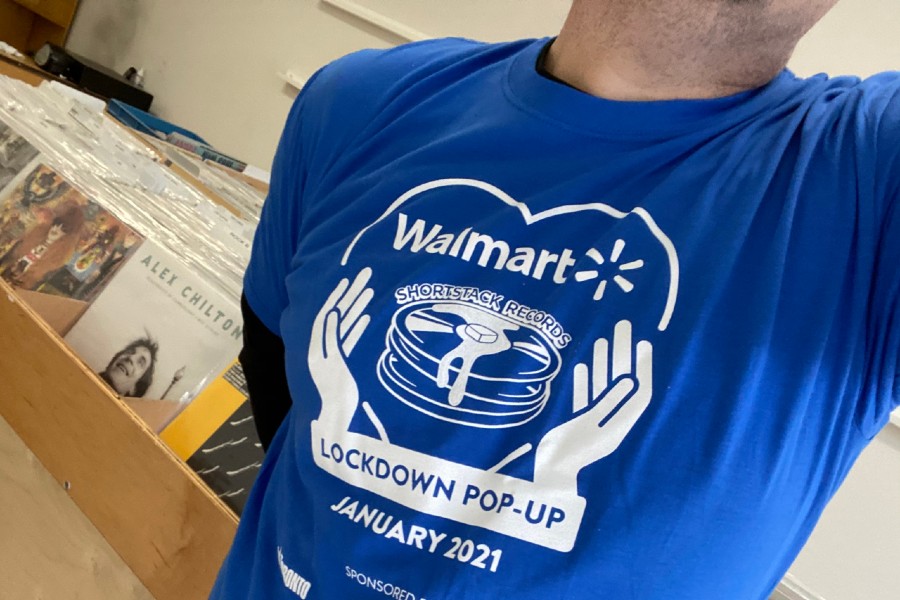 Shortstack Records can’t have people come to them, so it went to where there are customers: Walmart.

This past Sunday morning (January 10), Toronto record store Shortstack set up outside of the Walmart at Dufferin Mall for a one-hour guerrilla pop-up record sale. They just parked a hatchback filled with record crates in the parking lot and opened it up for people to flip through.

They even sold t-shirts.

As Ontario’s lockdown has dragged on with COVID cases still rising, many local businesses have spoken up about who’s allowed to open and who’s not. While businesses that don’t sell “essential” items like groceries are relegated to curbside and delivery service, big box stores like Walmart have been allowed to stay open. Even with the new restrictions announced today (January 12), big-box stores are held to different rules (though they will apparently face stricter regulation enforcement).

“Why Walmart?” Shortstack owner Cal MacLean wrote in the store’s newsletter announcing the pop-up the day before the event.

“While it’s true that box stores carry many items considered essential, Walmart locations outside of Ontario have either closed-off non-essential sections or had their staff not scan non-essential items at check-out. Doug Ford said that taking the same measures in Ontario would be a ‘logistical nightmare,’ allowing Walmart to make a profit from the goods that small businesses are currently prohibited from selling.”

MacLean tells NOW the main point of the event was not to protest but to sell records “albeit pointedly.”

He says a couple of the customers said they never buy used vinyl online, where stores have tried to get creative recreating the crate-digging experience on Instagram, on websites and by featuring “new arrivals” in email newsletters.

MacLean is not saying that he should be allowed to open, just that big box stores should be held to the same standards.

“I have my health and my business is still operating, knock wood,” he says in an email. “But it’s been frustrating to feel so helpless to the pandemic itself. The least we could ask is that our governments behave in ways that don’t contribute to that helplessness. Creating double standards for U.S. box store chains is callous at best, and it’s happening at a time when we should be looking out for each other more.”

Shortstack was strict about customers wearing masks and using hand sanitizer (both of which were offered complimentarily).

MacLean says that small stores like his are actually better able to enforce COVID protocols than often understaffed chain stores. He notes that Walmart at Dufferin Mall is not providing hand sanitizer free at the door to its customers. You have to pay for it.

Shortstack could have future pop-ups, but MacLean says it depends on the restrictions, number of cases and the weather.

“Walmart will be fine though!”