NOW MagazineNewsToronto has more than 3,000 cases of COVID-19 Ontario to give free iPads to students in low-income households

Toronto has more than 3,000 cases of COVID-19 Ontario to give free iPads to students in low-income households 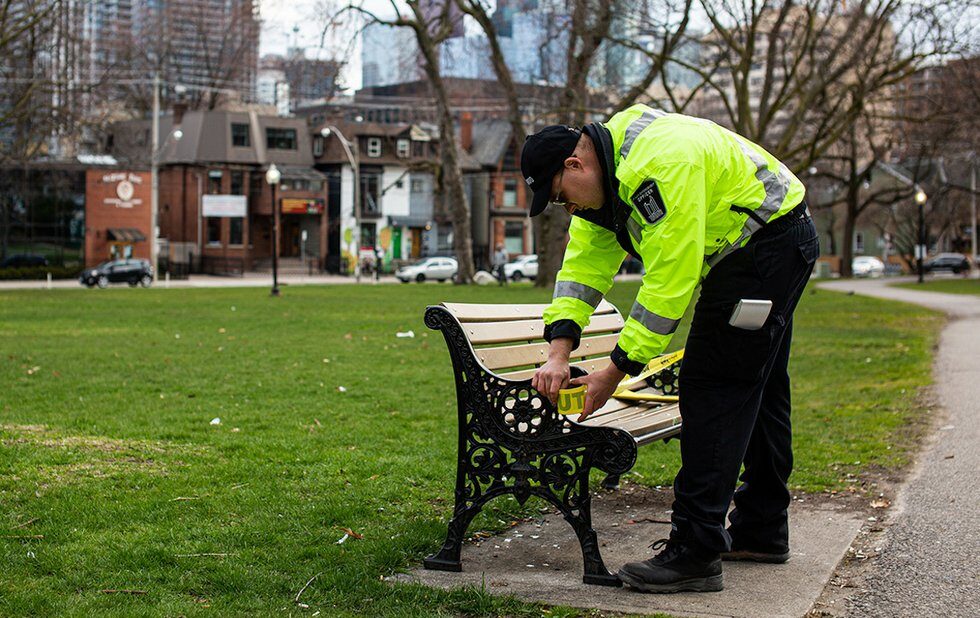 4:37 pm City projected to lose at least $1.5 billion in revenue due to pandemic

Toronto is facing a $1.5 billion loss of revenue by the end of the year thanks to the COVID-19 pandemic – and that’s the best case scenario, according to mayor John Tory.

During his daily press briefing, the mayor said the pandemic is costing the city $65 million per week. The largest driver of the loss is the drop in TTC ridership, which amounts to a weekly loss of $20 million in revenue.

Losses from other areas include permitting fees, the land-transfer tax and attractions like the Toronto Zoo.

Tory added that the TTC continues to operate to ensure essential and front-line health-care workers can get to work and that schedules are being maintained so that passengers can practice physical distancing.

“This is one of the greatest financial challenges the city has faced,” the mayor said.

City finance staff have run the numbers and project the city will lose $305 million over a three-month lockdown and $940 million over the course of the lockdown plus a six-month recovery period. Other projections covering a 9-month and 12-month period peg the revenue drop at $2.76 billion, he added.

Tory said officials are scouring city government for savings but Toronto will likely need a bailout from the province and federal government.

“This will require assistance from those governments in substantial amounts, especially taking into account the constitutional limitations placed on cities including those the size of Toronto, which itself is bigger than many Canadian provinces,” Tory said.

In March, there were 227,000 job losses for full-time and part-time workers in the GTA, according to Statistics Canada. The Conference Board of Canada has projected more than one million job losses in Ontario and predicts the provincial economy will shrink by more than 2.3 per cent.

Tory said he had a call with Beck Taxi operations manager Kristine Hubbard today and has since asked the city’s emergency operations centre to work with the company to set up a protocol to protect drivers and residents while, at the same time, ensuring people who are unable to drive themselves have rides.

Anyone with symptoms who must use a taxi or ride-sharing service are being asked to advise the company upon booking so precautions can be taken.

De Villa emphasized that people infected with COVID-19 should not take public transit.

“For anyone who is infected with COVID-19 and self-isolating… the only reason you should be leaving home is to go to a scheduled health-care appointment or hospital,” she said.

“It is best that you drive yourself,” she added. “If driving yourself is not possible, we ask that you arrange for a ride with a friend or family.”

If those aren’t options either, she said people who are infected that need to take taxis or ride-shares to appointments should ensure windows are open, sit in the back seat and wear a mask, scarf or face covering over the nose and mouth.

Passengers should also make a note of the driver’s name and license plate for contact tracing purposes, she said.

She also reported a few stats:

De Villa added that the city is now posting updates on the number of cases in specific long-term care and retirement homes online every Monday, Wednesday and Friday. See that info here.

The province has struck a deal with Rogers and Apple to purchase iPads at discounted prices to give to students from low-income families, Ontario premier Doug Ford and education minister Stephen Lecce said today.

Learning software will be preloaded on the over 21,000 iPads, which will have free wireless data from Rogers until the end of June. Rogers and school boards will also provide high-speed, low-cost internet to subsidized tenants and members of provincial housing partners.

School board will determine what students eligible to receive the iPads.

Lecce added that every high school in the province will have high-speed internet by September and every elementary school by September 2021.

In addition to supplying the iPads, Apple I including videos, apps and books to help teachers with lessons and will also offer one-on-one virtual coaching to teachers on the features.

Rogers is also giving a deal to eligible households by giving them access to high-speed Internet with no overage fees for $9.99 monthly.

Ford could not give a date for when schools will reopen. Earlier this week, the province extended an emergency order closes businesses, schools and public park amenities to May 12.

The federal government will still celebrate Canada Day on July 1, but is moving the festivities online.

“Our government has decided to celebrate Canada Day differently this year, in a way that will allow us to come together virtually to share our pride in being Canadian,” heritage minister Steven Guilbeault said in a statement. “For Canada Day 2020, we are working with Canadian artists and artisans to put together a virtual program, reflecting our diversity and values, and showcasing the immense talent our country has to offer.”

More details will be announced soon.

The government typically hosts Canada Day on Parliament Hill, but had moved the party to a different location due to construction.

Physical distancing measures that limit gatherings could last into the summer. In Toronto, all city-run events and city-permitted events are cancelled through June 30. Events scheduled for later in the summer that require advance rehearsals, such as Fringe Festival and Caribbean Carnival, have also been cancelled.

Ontario is expanding the list of essential workers that will be able to receive emergency child care. The government will extend an emergency order from March 20 that allowed some child-care centres to reopen to support health-care and other frontline workers with no other options.

The additional frontline workers who can now qualify for emergency child care are:

Ontario premier Doug Ford said today that he looked at the latest coronavirus projection modelling numbers last night and will share the data with the public on Monday.

The PM announced help on three fronts at his regularly scheduled press briefing today to fight the COVID-19 economic crisis. But this time along with promised help for the oil and gas sector, the environment and arts and culture were also a focus.

The government has announced a $1.7 billion fund to clean up orphan and inactive oil wells in the oil patch in Alberta, Saskatchewan and BC. Also, $750 million was announced for an “emissions reduction fund” to help the offshore oil industry in Newfoundland and Labrador reduce methane emissions. The government says the programs will together maintain some 10,000 jobs in the oil and gas sector.

The PM says the fund will also help provide credit for medium-sized energy companies through the Business Development Bank of Canada and Export Development Canada.

But some in the oil patch expecting a bailout may be disappointed, as at least two reporters pointed out in preambles to their questions to the Prime Minister.

“Just because we are in one crisis right now doesn’t mean we can forget about the environmental crisis,” the PM answered. “We need to help people in different ways moving forward.”

The PM also announced $962 million in support of regional development programs and $270 million to the Industrial Research Assistance Program to support start-ups. Arts culture and sports will also receive $500 million through Heritage Canada. He said there will be more details about that later.

• 125 medics of Canadian Armed Forces have been deployed to help in long-term care facilities in Quebec.

• More than 7.5 million claims have been made by Canadians for the Canada Emergency Response Benefit.

• The PM noted in his remarks that today marks the 38 anniversary of the Charter of Rights and Freedoms.

The number of resolved cases is 4,556 and 478 people have died, an increase of 55 deaths since the previous report.

Yesterday, there were 8,899 tests conducted in the province and 5,993 cases are under investigation.

This week, Ontario expanded testing guidelines to include people living and working in “congregate” settings such as shelters, prisons and group homes people living in the same household as health-care workers, care providers and first responders essential workers and cross-border workers.

10:33 am City-run supervised injection site to reopen this weekend

Toronto is aiming to reopen the supervised injection site The Works this weekend.

The city closed down the facility in March – the same month Toronto recorded the highest number of suspected opioid overdose deaths in any month since March 2019 – for health and safety reasons.

During her daily press briefing on Thursday, Toronto’s medical officer of health Eileen de Villa said the decision to close the The Works, located at 277 Victoria, was “extremely difficult.” She added the site was not well-set up for physical distancing and a worker at the clinic had tested positive for COVID-19 (and has since recovered).

“Many people who use our supervised consumptions service are also more vulnerable to severe illness from COVID-19,” she explained.

When The Works reopens, she added, Toronto Public Health will operate it under an appointment-based model.

The city has also installed fencing to encourage physical distancing to protect clients and staff. That fencing will remain for the “foreseeable future,” de Villa said.

A second health-care worker in the province has died of COVID-19. The woman in her 50s worked at the Sienna Altamont Care Community long-term care home in Scarborough. SEIU Healthcare said the personal support worker was a union member for 31 years.

The union representing TTC workers has bought 100,000 masks and is distributing them to its 12,000 members. ATU Local 113 has been calling on the transit agency to provide more personal protective equipment (PPE) for transit operators.

On Wednesday night, 30 TTC bus operators at the Queensway bus garage walked off the job to protest the lack of PPE. The union has accused the agency of shrugging safety responsibilities.

TTC spokesperson Stuart Green told CTV News the ministry of labour is reviewing the matter. He added that five operators walked off the job at the Wilson division, but the provincial ministry of labour found no grounds for a work refusal.

On Thursday, the union said an 18th TTC employee tested positive for COVID-19. The employee is a subway operator from the Danforth Division and is recovering.