In a hospitality industry where precarity and minimum wage is assumed, the vote by Broadview Hotel workers to join Unifor is particularly noteworthy 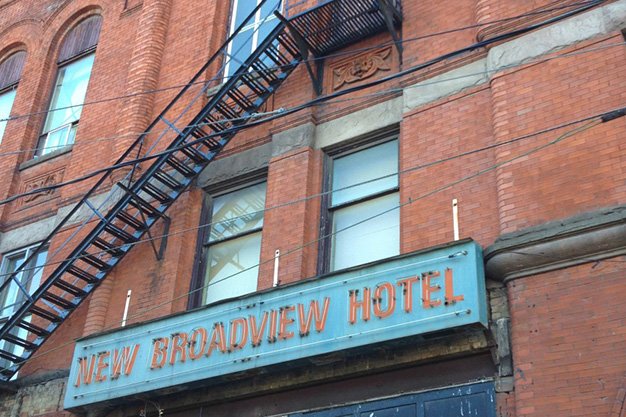 When Streetcar Developments purchased the Broadview Hotel in 2014 and transformed it from a strip club and rooming house into a $24-million boutique restaurant and hotel, the redevelopment was seen as a marker of change in the Riverside neighbourhood.

A building that once housed many on the cusp of homelessness now charges upwards of $300 a room for a single night. Many of the few remaining independently owned businesses along the strip of Queen East between the Don Valley Parkway and Logan are being priced out the once working-class neighbourhood as it becomes increasingly gentrified.

The change in the social and economic makeup of the area has extended to the hotel as well.

On October 30, non-management employees of the hotel – including servers, bartenders, housekeepers and cooks – voted to join Unifor, the country’s largest private-sector union. Broadview Hotel management declined to comment for this story.

David Sanders, a veteran organizer with more than 20 years experience in the labour movement, says the vote to unionize is one of the strongest he has ever seen.

In the lead up to the union drive there have been a number of issues for workers. Some are a reflection of the company’s inexperience in the hospitality industry, workers tell me. Others are a consequence of poor planning – like the fact that there are only 50 lockers for a staff of more than 100.

Besides working conditions and wages, workers also complain about long shifts without breaks.

Unions in hotels are not uncommon. Workers at the Sheraton and Royal York are part of Unite Here Local 75.

However, in most restaurants and bars in Toronto unions remain virtually non-existent, which makes the vote by Broadview Hotel workers particularly noteworthy, says Sarah Tauriello, one of the key figures in the organizing campaign.

Tauriello says that this move by the workers “marks a change in the industry” which “is at a tipping point.”

The issues raised by employees are not unique to the Broadview Hotel. There are many widely accepted practices in the bar and restaurant industry that don’t meet the requirements of the Employment Standards Act. For example, although it is technically illegal for management to withhold tips for things like customers who dine-and-dash, it remains a common practice.

Zeke Rothfels, who has worked in restaurants across the city for almost a decade, tells me she has “never had a designated break” in her eight years as a server, and knows few other servers who have.

Hospitality work is often seen as a temporary job done in the service of finding something better, whether that be school or while in pursuit of another career. This is part of the reason working conditions have been overlooked for so long.

It is also one of the fastest-growing industries in the city, Tauriello tells me. “This is where the work is going – this is where we need to organize,” she says.

A report published earlier this summer by the Canadian Centre for Policy Alternatives, found that low-income workers can no longer afford to live in Canada’s major cities. Lack of effective rent control and gentrification spearheaded by development have priced many hospitality workers out of the market, making the union drive by Broadview Hotel workers especially symbolic in an industry where precarity and minimum wage is assumed.

Sanders is hopeful that the unionization effort at the Broadview Hotel will translate to other food and beverage companies across the city. He tells me, “the younger generation are more willing to organize.” This makes him “optimistic about the future.”

Whether the unionization of employees at the Broadview Hotel will spark a chain reaction remains to be seen, but the vote is nevertheless notable in the face of a changing city and economy.