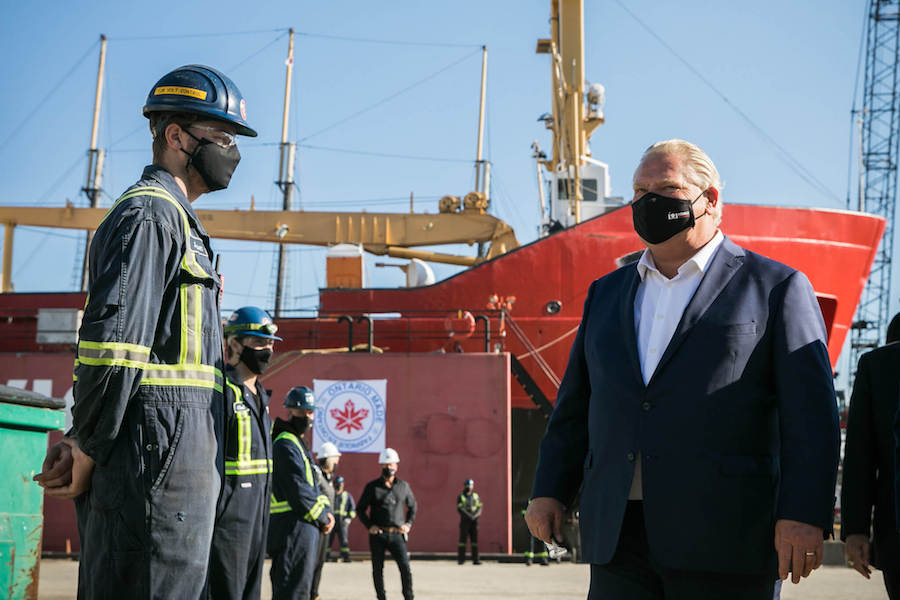 Toronto and Peel will enter into lockdown just after midnight on November 23, Premier Doug Ford said on Friday.

“The situation is extremely serious and further action is required to avoid the worst case scenario,” he said during a Queen’s Park press briefing. “In certain parts of the province, it’s spreading at an alarming rate in the community.”

Effective at 12:01 am on Monday, the following lockdown measures will be in effect in Toronto and Peel:

For said that, in the past week, COVID-19 hospitalizations have increased by 22 per cent across the province and intensive care admissions have grown 50 per cent.

He added that Scarborough Health Network has already started delaying surgeries and other hospitals are “teetering on the edge of having to delay scheduled surgeries.”

The premier also pleaded that Ontarians avoid the kind of panic shopping that emptied store shelves of things like toilet paper and hand sanitizer during the first lockdown in the spring.

“Please avoid panic buying right now. There’s no need to buy more than you need for a week or two,” he said.

Last week, Ford announced stricter measures as part of the province’s COVID-19 warning framework that moved several jurisdictions into the red and orange levels. With case counts continuing to climb, he warned on Wednesday that a lockdown was imminent in Toronto, Peel and York.

York Region public health officials asked earlier this week to remain in the red zone. Durham Region and Waterloo will also move into red on November 23.

The regions will remain in these levels for a minimum of 28 days. Officials will review public health data on a weekly basis, the government said.

The province is making an additional $300 million – for a total of $600 million – in relief available next week to help businesses in lockdown or the red zone with fixed costs like hydro bills and property taxes.

Health Minister Christine Elliott also said the government is amending regulation 950 under the Provincial Offences Act to allow local public health officers of health to issue tickets if local measures are not followed.

The province is working with the chief justice of Ontario to create an order to establish a set fine of $750 for any ticket issued.

“We’ve seen the situation continue to worsen,” Elliott said. “It’s clear more needs to be done to limit community transmission of COVID-19 so we can keep our schools open, safeguard our health system capacity and safeguard our most vulnerable.”

At a press briefing at city hall on Friday, Mayor John Tory said he supports the lockdown measures for Toronto.

“The numbers continue to go in the wrong direction despite the city of Toronto having the strictest existing measures in the province,” he said. “Please stay home. Please stay home because it is the right thing to do.”

Ontario reported another 1,418 COVID-19 cases on Friday as federal health authorities released new data predicting a huge surge in infections by the end of the year if stricter measures are not implemented.

Canada’s Chief Public Health Officer Theresa Tam warned the country could see 60,000 new cases per day by the end of December if Canadians do not lower the number of people they come in contact with.

She said it’s up to both Canadians and public health officials to act to prevent spread, but added there’s still a chance Canada can avoid an epidemic trajectory similar to theEuropean countries currently in lockdown.

“Absolutely do not go above what we have now,” Tam said during a press briefing in Ottawa. “Otherwise, we’re really in trouble.”