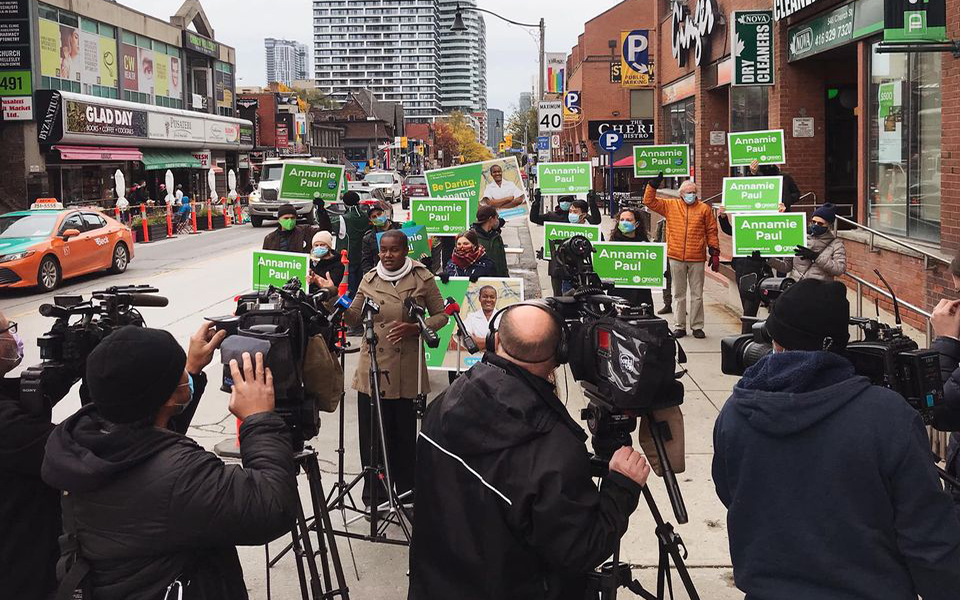 1. The Greens have arrived under Annamie Paul – and that’s bad news for the NDP

The newly minted leader of the Greens has impressed right out of the box. Despite being late to the race – Paul wasn’t nominated to run in Monday’s by-election until October 5 – she ran fast to garner 33 per cent of the vote. That’s 25 per cent higher than the Green’s previous result in 2019.

Paul ran back then, too. But that was pre-COVID and a powerful cabinet minister, Liberal finance minister Bill Morneau, was the incumbent. Paul’s rise seems to have come at the expense of the Liberals, whose support dropped 15 per cent with former TV personality Marci Ien running. But Paul also managed to wrest votes from the NDP.

The historic party of the Left keeps losing ground to the Greens in national election contests.

After running strong candidates in Toronto Centre and finishing second to the Liberals the last two times, the NDP fell to third with 16 per cent of the vote. Adding insult to that result is that the NDP ran a known quantity in the riding in Brian Chang, who finished with 22 per cent of the vote in 2019.

The NDP had approached housing advocate Cathy Crowe to run. But word is Crowe didn’t want to leave COVID-related work in the middle of a shelter crisis in Toronto to go through a nomination process, let alone a campaign. The question of what financial support the party could lend to the Toronto-Centre race was another issue. While other parties have been able to raise money through the pandemic, the NDP has struggled.

Former Green party leader Elizabeth May had called on the NDP not to run a candidate against Paul. As the first woman of colour to take the helm of a federal party in Canada, the Greens were hoping the NDP would step aside to help clear the way for Paul’s election – as the Greens did in the Burnaby South by-election in BC that elected NDP leader Jagmeet Singh in 2019.

The dust-up was not big at the doors, but it dogged the NDP nevertheless, filling up the news cycle for a few days of the campaign. Former Liberal cabinet minister Greg Sorbara, former Bob Rae-era NDP cabinet minister Zanana Akande and Conservative backroom operative Hugh Segal penned a joint op-ed in the Toronto Star endorsing Paul.

As it turns out, Paul would have needed more than half the NDP’s votes to beat the Libs. It’s plausible she could have won without an NDP challenger. That’s because the Conservatives, who finished with 12 per cent in the riding in 2019, were a no-show, with Benjamin Gauri Sharma tallying just five per cent of the vote.

2. A pandemic is no time to hold an election – unless you’re the governing party

The two by-elections marked the first time Elections Canada administered an election during the COVID–19 pandemic. Elections Canada did its best to accommodate voters trying to navigate a pandemic, including with four days of advance polls and mail-in voting, but turnout was abysmal. Some 25 per cent of eligible voters turned up to cast a ballot in York Centre. The number was a bit better in Toronto Centre where 31 per cent turned out.

That’s compared to 66 per cent turnout in the last federal election in Toronto Centre and 62 per cent in York Centre. A total of 43,261 Canadians voted in both by-elections, according to Elections Canada.

Paul had actually urged the suspension of the election, arguing that renewed restrictions adopted by the province would prevent people from taking part in voting.

But despite the pandemic, there have been three provincial elections in recent weeks in Canada. Two of those (in New Brunswick and BC) returned majorities for minority governments. Which is why most political observers believe we could be in for a federal election sometime in the spring – perhaps May or June when the next wave of the virus will most likely be behind us.

3. The Liberals got nothing to gloat about, either

The Grits pulled the trigger on both by-elections short-circuiting the nomination process to appoint TV personality Marci Ien in Toronto Centre and community activist Ya’ara Saks in York Centre. That didn’t sit well with a few Liberals who chose to stay home.

But for voters in Toronto Centre, the resignation of incumbent MP finance minister Bill Morneau under the WE charity cloud clearly wasn’t as big an issue. Ien tallied some 41 per cent of the vote, which is not too shabby for a relative unknown, but still 15 percentage points less than Morneau got in 2019.

That the party establishment would lose a powerful voice in government with Morneau’s departure was another factor working against traditional Liberal support in Toronto Centre.  The Cons also uncovered a tweet by Ien from 2011 in which Ien seems to suggest a conspiracy about 9/11. That didn’t help.

4. For the Conservatives, a glimmer of hope (maybe) and a lesson in racial politics

While the Toronto Centre race sucked up most of the media attention, it was the race in York Centre – the middle-class and multi-ethnic enclave straddling Bathurst north of Hwy 401 – that provided the drama election night.

Saks would ultimately prevail by some 700 votes, but it was touch and go for most of the night against Conservative parachute candidate Julius Tiangson, who concentrated his efforts on the riding’s Filipino community, which makes up some 17 per cent of the area’s population.

It didn’t quite pay off. But Tiangson’s run provides a playbook for the Cons on the importance of wooing the ethnic vote.

The party had significant success mining ethnic votes under Harper, including in York Centre where former MP Mark Adler made inroads in the Filipino community by pushing the party’s family reunification policies.

The current incarnation of the Conservative party under Erin O’Toole, however, is a different animal. It has a racism problem. That emerged during the recent leadership race and in this campaign as well, when Tiangson was called out for questioning U.S. presidential candidate Kamala Harris’s Blackness in a tweet.

While some political observers saw the result in York Centre as a warning to the Libs, party insiders note that the Conservatives hold the riding provincially, and that Tiangson had the benefit of that organization on the ground.

Saks, a first-time candidate, was also slow getting her organization together. Some Liberals simply took for granted that they would win in what has historically been a Grit stronghold and stayed home. That nearly came back to bite them.

5. Maxime Bernier is in this politics thing for the money

Ever since being bounced from the Conservative party and from the Beauce riding in 2019 (which he’s held in Quebec since god knows when), the high-flying leader of the People’s Party of Canada has been looking for a place to run.

Bernier found it in York Centre. But outside a half dozen Facebook videos on his campaign website and campaign literature touting no more “mass immigration” and an end to lockdowns, there was little to be seen of the candidate fighting “pandemic hysteria.”

It showed in the result. Bernier tallied a paltry 642 votes. Why even bother? Max says he’s building a movement. That’s a tough one to square with the results. But running at least provides supporters with the appearance he’s keen. More importantly, it allows him a platform to raise money. And according to recent media reports, there are a few monied folks in Canuckistan who appreciate Max’s brand of populism. God help us – and them.