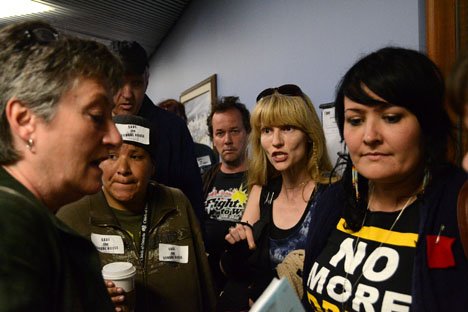 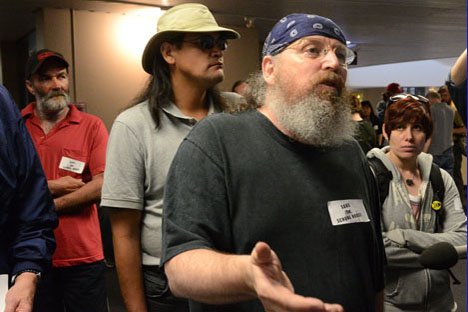 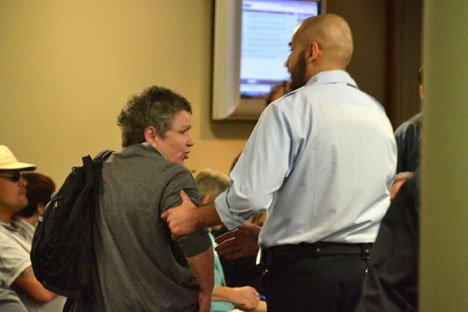 Police were called to a City Hall committee room Wednesday morning when a group of protesters angered by the closing of a men’s homeless shelter disrupted the proceedings.

The roughly two dozen protesters came to the meeting of the community development and recreation committee to denounce the shuttering of the Schoolhouse, a 55-bed facility in the downtown east end and one of the city’s few “wet” shelters that allows clients with addiction issues to openly drink alcohol.

Frustrated that a procedural bylaw prevented them from speaking at the meeting, protesters stood up one by one and shouted at councillors to rescue the shelter, before they were escorted out by security as police officers stood by.

No arrests were made.

“The message is clear, we’re not letting this place shut down,” said Gaetan Heroux of the Ontario Coalition Against Poverty, who was visibly emotional after being ejected from the committee room. “We’re not going to walk by and watch our people die in the street, while you keep a building empty that for over three decades has acted as a shelter for people.”

Dixon Hall, the non-profit group which operates the Schoolhouse using $135,908 in annual municipal funding, first told the city of its intention to close the shelter in 2009, citing a $300,000 repair backlog at the 126-year-old building, cramped conditions for clients, and the organization’s shifting focus away from shelter services and toward permanent housing strategies.

The Schoolhouse has already started to wind down its programming and will shut down unless council finds a way to intervene. Despite the impassioned pleas of protesters however, there appears to be little will at City Hall to save the facility, even among councillors with a history of homelessness advocacy.

The local councillor, Kristyn Wong-Tam, recently toured the Schoolhouse and concurs with a staff report that found the facility isn’t serving its intended purpose as a transitional shelter.

“It was becoming very clear by the end of the tour that there is good reason on why this is not necessarily the most appropriate facility,” she said. “The decision moving forward now is, this is not working for us, so what do we replace it with?”

While the original intent of the program was to provide short-term shelter, more than half the Schoolhouse’s clients have been at the facility for over a year, leaving when it shuts down at 8 am and returning at night to sleep, effectively using it as ad hoc housing.

And while the program allows open consumption of up to 12 bottles or cans of beer a day, it doesn’t meet the city’s definition of a harm reduction initiative because drinking isn’t closely monitored and there’s no programming to push clients towards recovery.

Even David Reycraft, director of housing for Dixon Hall, says his organization could better serve the Schoolhouse’s clients by closing down and finding them permanent places to live.

“There’s a need to continue to work with this population, but not in this model and certainly not in this building,” Reycraft told NOW in an interview.

“The men that we’re working with, we will find appropriate accommodation for them. We’re working very closely with the city and other partner agencies… to ensure that they’re appropriately housed.”

Councillor Joe Mihevc, who sits on the committee, would not come out against closing the Schoolhouse but says there are serious systemic problems with social housing in Toronto.

“The deep-rooted anger that people are voicing, that they voiced today, is absolutely right on,” he said, “in that our commitment to affordable housing as a country, and as a province, and frankly even as a city under the Ford administration, has been woefully inadequate.”

“We’re not building enough social housing, affordable housing, and supportive housing for people with these needs. So this is all going to come to boil if we don’t get our heads around it.”

After protesters’ outburst Wednesday, the committee deferred consideration of the staff report on the Schoolhouse to its June 26 meeting, at which members of the public will be allowed to make deputations.