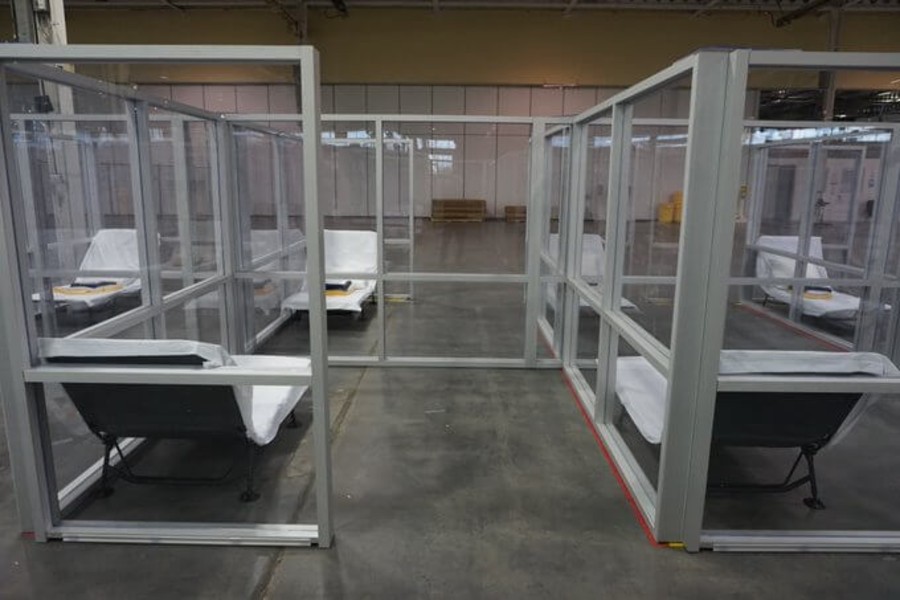 But after a photo of the centre circulated on social media, the city is facing a backlash. Housing advocates say the lack of privacy and “glass cage” look of the shelter spaces resemble detention centres or prisons.

The shelter uses impermeable and see-through barriers between cots, and can also accommodate some extra spots during Extreme Cold Alerts.

“In respites, privacy is not a standard that is often met,” says Lorraine Lam, an outreach worker with Sanctuary Toronto. “For that reason, a lot of people actually choose to not go out of the cold. They just don’t feel safe, or there’s no privacy.”

She noted in a thread on Twitter that people who choose to live in the Better Living Centre won’t be allowed to hang anything up to give themselves some privacy.

Lam also says that while the city may be framing it as a “choice” for people experiencing homelessness to enter the respite centre, that can be misleading.

For other programs, such as Out of the Cold, Lam says people knew they were making the choice to either maintain their privacy outside or be inside for the night.

“Whereas I think with this set-up right now, people are being forced to leave encampments, and this is the alternative they’re given. So there’s no element of choice for people,” she says.

A group of encampment residents, community members and advocates will gather on Sunday (November 8) to speak out against the new respite centre. They say they will continue to live in their tents in Scadding Court. They say city workers are pushing residents to move, and worry they’ll be forcefully evicted if they refuse to leave.

“The city is planning mass evictions from the parks because we don’t want to live in their congregate shelters. Hundreds of people a few feet apart in plexiglass? I’ll take my chances on the street,” he said in a press release sent out by the Encampment Support Network Toronto (ESN).

ESN says residents and supporters from the surrounding community plan to build winter-safe sleeping pods (dubbed “the Chrysalis”) for residents’ to weather nights in subzero temperatures after the press conference on Sunday.

The city has countered that the design of the Better Living Centre shelter is prioritizing health and safety measures during the pandemic.

‘The barriers are not meant to provide privacy,” said Lyne Kyle, a spokesperson from the city’s media relations team, in a statement. “Their purpose is to protect against COVID-19 transmission in an area that would typically be more open.”

The centre is meant to be a “low-barrier option for those experiencing homelessness.” The city says the site is a place to rest, eat hot meals and access supports, such as referral to harm reduction and mental and physical health supports.

Kyle added that the barriers were created in consultation with Toronto Public Health and other infection control experts to meet COVID-19 guidelines around congregate settings.

Lam notes that while the city may have consulted with health officials, she’s sure that residents who are currently homeless and housing advocates were not consulted.

“If we had known that this was the plan, we would have said we don’t think this is actually going to work,” she says. “And to be frank, people will probably not stay, so then we’re just going to be back at square one. And we’ll have the same people back outside in encampments.”

She notes that while shelter workers may be dealing with some backlash when they offer spaces in the centre to people looking for a place to stay, the problem is really a matter of supply.

In addition to the 100 spaces at the 24-hour respite site on the CNE grounds, there will be 150 beds in hotel programs and 90 hotel beds to replace the city’s Out of the Cold program.