NOW MagazineNewsWhat would the world lose if Kitimat’s whales disappeared?

What would the world lose if Kitimat’s whales disappeared?

NFB documentary The Whale And The Raven ponders the environmental impacts of Shell's liquified natural gas plant near Kitimat, BC 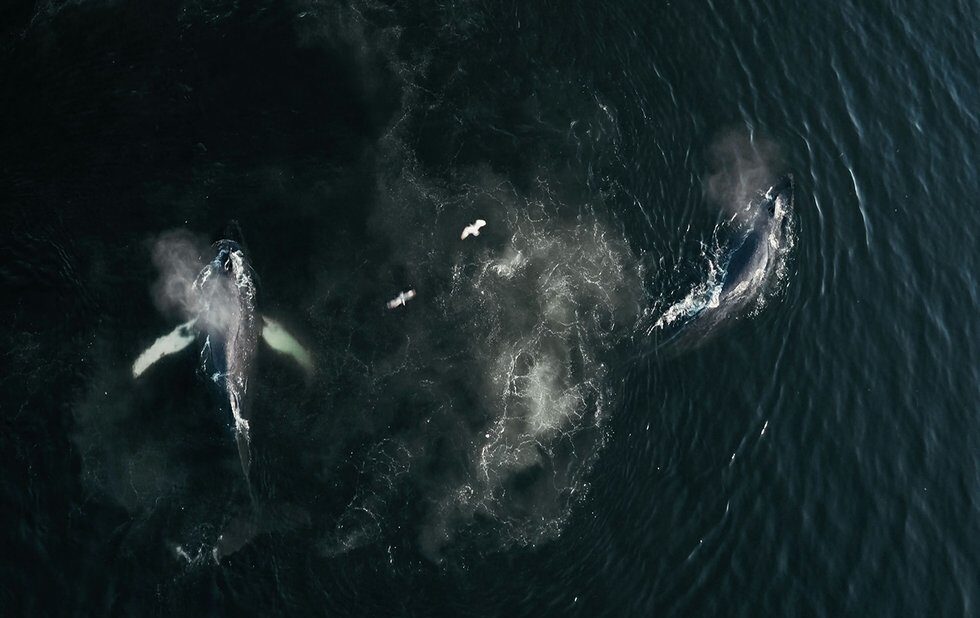 What if self-awareness, compassion and thinking were not exclusively human affairs?

That’s the question posed by German filmmaker Mirjam Leuze at the conclusion of her documentary The Whale And The Raven.

But, let’s start at the beginning in Tsimshian Territory, British Columbia, Canada, where whale researchers Janie Wray and Hermann Meuter founded the Cetacea Lab on a remote outcropping on uninhabited Gil Island to study this unique marine environment.

The sound of waves lapping up on the shore and ravens cawing in the sky is punctuated by haunting whale calls coming from a network of hydrophones (or loudspeakers) set up by the pair. Drawn to the rich food sources and quiet waters, humpback whales, pods of orca, fin whales and porpoises eat, play and raise their young in the Kitimat fjord system.

Whales, like people, thrive best in a community. However, the orca, humpback and fin communities living here in the fjords are not only thriving but cohabitating and sharing the coastline.

Wray and Meuter are researching the potential impact construction of a liquefied natural gas (LNG) plant in nearby Kitimat by LNG Canada, a consortium led by Shell, will have on this pristine environment.

Kitimat is a coastal community with a population of 8,131 situated on Haisla Territory. It’s the start of the proposed tanker route.

In 2007, Meuter was adopted into the Ganhada (Raven) clan and Wray into the Gisbudwada (Blackfish or Killer Whale) clan. They’ve been important allies of the Gitga’at Nation in their fight against oil tankers ever since.

Of particular concern are the potential detrimental effects from increased traffic, as well as the impact of the resulting noise on the sonar of the large aquatic mammals thriving there.

Leuze’s film is an exploration of relationships. The relationships, based on love, mutual respect, acceptance and interconnectedness are well established between the researchers and the whales (they know every whale by sight and mannerism) the whales and the people of the Gitga’at First Nation and the primeval environment all these players call home.

First Nations like the Gitga’at have lived in this area for more than 1,000 years. “They have struggled since colonization to maintain sovereignty over their territories, which they still steward today,” says Leuze.

Helen Clifton is the matriarch of the Killer Whale clan, Gitga’at First Nation and widow of former Chief Johnny Clifton. She has lived in the area all of her life, but says it’s only been in recent decades that the humpback whales have returned.

Their songs, which usually ring out in the late summer and early fall, can now be heard as early as May. The Gitga’at have come to understand that these treasures need to be celebrated, particularly as climate change impacts the natural cycles of life.

In 2006, before LNG Canada came along, Enbridge had their own plans to transport crude oil on supertankers through the Kitimat fjord system. But a diverse alliance of Canadians, the Gitga’at and other First Nations people took the case to court. In 2016, after a 10-year legal battle, the project was defeated.

But by that time, the Gitga’at First Nation found themselves in a precarious financial position. And other companies had discovered the proposed tanker route and started making plans to export natural gas to Asian markets. The new Canada LNG project is the largest private investment in Canadian history.

In the film, Leuze explains, “An agreement between the government of British Columbia and First Nations people along the proposed tanker route promises financial support to affected communities.”

However, Leuze adds, “If a signatory spoke out against the LNG industry, the government of British Columbia reserved the right to suspend payments.”

Once again, the Gitga’at people do have are a number of allies working to protect this unique biosphere, including storyteller and artist Roy Henry Vickers. This First Nations man generously recounts the history of First Nations people learning the many secrets of the sea from the Orca chief. It’s a lesson more Canadians need to hear.

Archie Dundas and his partner, Nicole Robinson, are both Gitga’at Guardians who patrol the fjords looking for potential hunters or fishers and support the Nation’s monitoring and research work.

Then there’s the Douglas Channel Watch, an environmental non-governmental organization made up mainly of settlers from Kitimat intent on preserving the whale populations as well as addressing issues like climate change.

What would the world lose if whales were to disappear? Wray answers that question in the film: “It would be a really lonely ocean without the sounds of whales. It would be a lonely planet without them.”

The Whale And The Raven screens at Planet in Focus Film Festival in Toronto on Friday (October 18) at 8:30 pm.