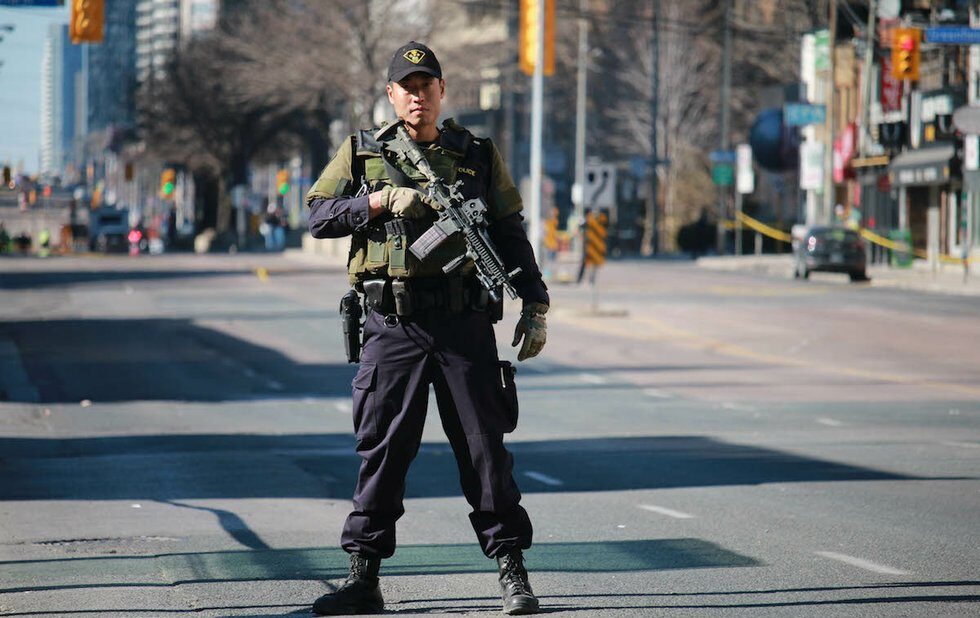 Heidi Matthews’s Does Misogyny = Terrorism? (NOW, May 10-16) makes the standard mistake of conflating every social ill with Islamism when she writes that there’s “an undeniable correlation between misogyny and acts of mass public terrorism, ranging from racism to ‘radical Islam.’”

This, after opportunists blamed Alek Minassian’s van attack on “a Middle Eastern male” and Muslims throughout Toronto cringed at another act of violence being attached to the community. Radical Sunni Islamists haven’t ever attacked women per se, but generally, other faiths such as Shias, Christians, Kurds and Yazidis.

Re Trans Mountain Turning Point (NOW, May 3-9). Thanks NOW and Pamela Palmater for bringing this story to Toronto.

This struggle reminds me of when Lubicon Cree Chief Bernard Ominayak and elders would come to Toronto to educate the world on what was happening to the Cree Nation of Little Buffalo and Mother Earth.

Back then, environmentalists, churches, First Nations and concerned citizens joined in the struggle to stop logging, organizing boycotts against the oil and gas industry and clear-cut logging. The press do not give us coverage like they used to, which makes things harder.

With climate change you’d think the government would take concerns about this pipeline seriously. There is enough evidence now for the world to see that Mother Earth cannot take this disrespect.

A rapid transition to renewable energy

Letter-writer Ian Clarkson says there are a number of First Nations communities that will benefit from their support of the Trans Mountain pipeline expansion (NOW, May 3-9). This will not be a long-term solution. Pipelines and the extraction and use of oil are already wreaking havoc on the planet.

The entire country must act together on a rapid transition to renewable energy that respects the rights and livelihoods of all.

I’m dismayed that NOW Magazine would write about an unauthorized exhibition of Banksy’s work (NOW Online, May 7). The exhibition will make money for people who have pursued a commercial venture without the artist’s consent. (And $35 a ticket is a fairly hefty price.)

It’s particularly galling since Banksy has amassed a following from creating outstanding artwork in what is essentially a transient medium and relies on associated means of revenue rather than exploiting the original genius street art. This exhibition seems like a totally opportunistic cash grab.

This article destined for the dart board

I just read your article Ontario Election Primer 2018: It’s A Crapshoot (NOW, May 3-9). What a biased piece of crap! You rip one on Ford and stand up for that nightmare liar and cheat Wynne? What planet are you on? Kathleen Wynne is the worst premier in the history of Ontario and deserves zero respect. I will put your article on my dart board for sure.

Re 5 Takeaways From Ontario Leaders Debate (NOW Online, May 8). How anyone can believe Doug Ford can find “efficiencies” on the one hand while promising billions in spending is laughable. It’s so painfully obvious he has no idea what he’s talking about.

It’s a real tragedy when you have three party leaders who are unappealing and uninspiring running in this election. Ford needs to be defeated and the PC party needs to wake up and choose a leader who has some semblance of intelligence.

Meanwhile, from the war-on-terror file

Are Canadians shocked to discover that their own government actively tried to get Carleton professor Hassan Diab extradited, and convicted, for a crime he didn’t commit? I certainly am.

The synagogue bombing in France in 1980 for which Diab was arrested was a horrendous crime. It’s no wonder France wanted to find and convict the perpetrator. But they apparently didn’t care if the man they got was guilty or innocent – and neither did the Canadian government.

If the present government does not fix our extradition law, it will happen again.

Diab is not asking for money forhis ordeal. He says it is meaningless compared to the joy of being with his children.