However, Medical Officer of Health Dr. Eileen de Villa said the city will still surpass ICU capacity by the end of January 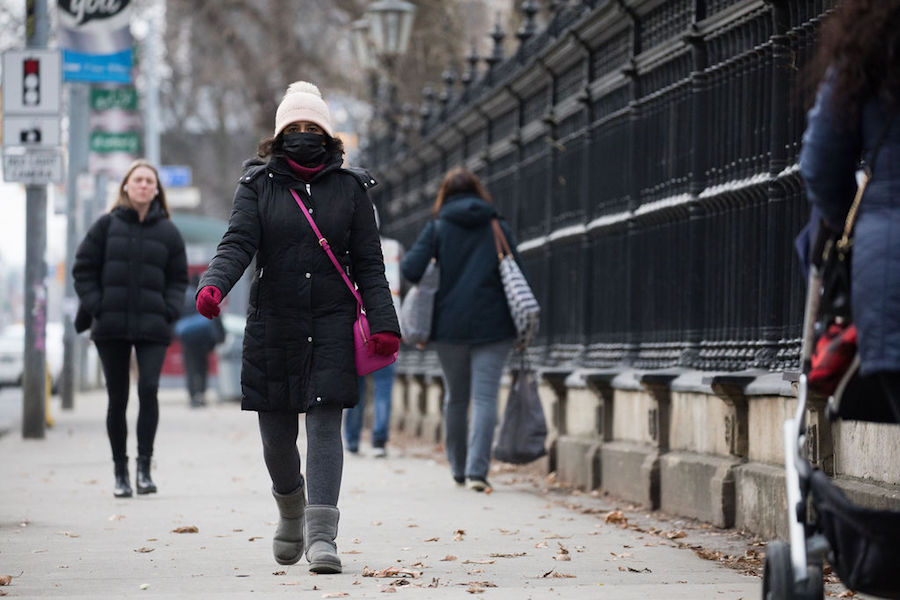 For the week of January 3-9, TPH data indicated “time at home” was 82 per cent, she said. In March of last year, that number was 87 per cent.

De Villa said the numbers are an optimistic sign that lockdown restrictions are having a positive effect in Toronto.

“Time-at-home measures were high last March and then decreased over the summer during reopening,” she explained. “We saw modest increases in time at home following additional measures put in place in October and November.

“This suggests the lockdown from December 26 has had some impact on movement in Toronto,” de Villa added. “It is early going though. But if it holds then, over time, decreases in case counts and hospitalizations should begin to emerge.”

On Monday morning, de Villa told a Toronto Board of Health meeting that data for December also showed an increase in the amount of time devices were spending at home.

Although people taking holidays over Christmas partially accounts for the drop, the time-at-home indicator was “over and above what would be expected” during a holiday break in a normal year.

Mayor John Tory said he has also requested traffic data. He said traffic levels drop to half of what’s normal last spring, then ticked up to 85 per cent in late summer and fall.

Though Toronto went into lockdown again in the fall, traffic levels only reduced to 70 per cent of normal levels by the end of the year, the mayor said.

“What we will hopefully see as January unfolds further that traffic levels will further drop,” he said, adding that traffic is not an “ironclad indication” of whether public health measures are work but it gives “some indication” of compliance with the rules.

The bad news: City to hit ICU capacity by end of January

However, COVID-19 spread remains very high in the city.

De Villa reported a single-day increase of 892 new infections. There are 491 people in hospital – an increase of 25 – including 113 in intensive care. Two more people have died in the past day.

Earlier in the day, she told a Toronto Board of Health meeting that intensive care units in the city will surpass capacity by the end of January.

“The issue of course is that in any scenario that we show, we are on track to surpass the standard ICU capacity before the end of January,” she said. “This simply emphasizes yet again how important it is, that to the greatest extent possible, we together as a community – each and everyone of us as individuals – does our very best to maintain that distance with others.”

According to the data she presented, Toronto ICUs will be over capacity once the number of patients reaches 200. As of Monday, there are 113 COVID-19 patients in intensive care units.

The seven-day moving average for new hospitalization is 37 as of Friday, she said.

Toronto continues to see a “sharp increase” in daily counts overall since holiday, she added. The seven-day moving average for new daily COVID-19 cases in Toronto is 852 as of Friday.

De Villa said 64 per cent of deaths in Toronto are linked to outbreaks in long-term care and retirement homes, illustrating that residents in those settings are vulnerable to the most severe outcome.

Health Minister Christine Elliott said during a press briefing in Vaughan that GTA COVID-19 patients are now being flown to other parts of the province, including Kingston.

Charges laid for private gatherings over the weekend

Fire Chief Matthew Pegg said officers laid 41 charges as a result of large gatherings on private property over the weekend, including at a gaming house and in private residences.

Meanwhile, 10 charges were laid and 12 notices were issued against owners and operators of various retail stores for violating lockdown restrictions under the Reopening Ontario Act.

The offending shops include beauty supply shops and nail salons, linen and housewares shops and a hookah lounge.

Bylaw inspectors also visited 146 restaurants and bars and no tickets were issued.

Earlier in the day, the labour ministry said provincial inspectors found 75 box stores to be operating in violation of lockdown rules during a two-day “blitz.”

Labour minister Monte McNaughton told CP24 that 70 per cent of stores were found to be in compliance over Saturday and Sunday.

Ontario Premier Doug Ford imposed a province-wide lockdown on December 26 and then declared a state of emergency on January 12.

Further restrictions took effect on January 14 under a stay-at-home order.