The city claims that parks are "private property" and “trespassers” can be removed, but the city's powers are not grounded in property ownership 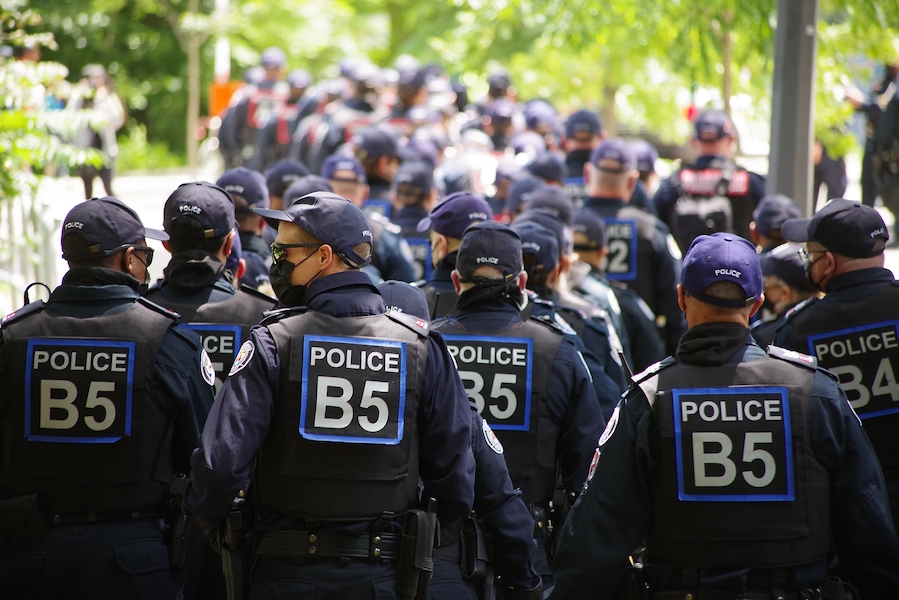 On June 22, the City of Toronto sent hundreds of police officers and private security guards into Trinity Bellwoods Park to remove about 24 residents who had been living in an encampment in the park.

Amid the drones, horses and armed police, hundreds of supporters showed up to form a circle to protect these residents from forced evictions. The encampment residents were fenced in by police and supporters were kept outside the fence as dumpsters awaited the clearance of residents’ homes and belongings.

The city claims that parks are city property. And, like any property owner, they can remove “trespassers” – even if there is nowhere else for unhoused people to go. In fine print all over the city, signs at parks note that the green spaces are the “private property” of the Corporation of the City of Toronto.

But the people inhabiting the park and their supporters make a very different claim: the city is not just an owner and the parks are not the city’s property. Instead, these are public spaces, meant for all, including the unhoused among our neighbours. And while the city can regulate public space, they must do so as a government, not as a property owner.

Municipal powers are not grounded in property ownership, they are grounded in their duty to protect and uphold the human rights of their residents, especially when it comes to the obligation to treat unhoused people with dignity and respect.

Cities have legal powers to create and enforce municipal bylaws, including in parks. In Toronto, like many other Canadian cities, park bylaws include a rule that no one can set up a temporary or permanent tent, structure or shelter without a permit. Generally, bylaws are enforced by issuing tickets.

But if the City of Toronto decides to escalate the matter they can issue a trespass notice. The police may then be involved in clearing encampments and confiscating “encroachments” like tents or pets.

Many have urged the city to do so, including the UN Special Rapporteur on the right to adequate housing, Leilani Farha, who released a detailed road map of how to do so in the National Protocol for Homeless Encampments in Canada in March 2020.

Yet, the City of Toronto uses doublespeak to reinforce its powers to exclude unhoused people from public space. According to the city, people living in encampments are not “residents” and tents are not “homes.” Instead, people experiencing homelessness are “individuals who were sleeping outside secure permanent housing” and their belongings are “litter.”

The city claims that encampment residents are not being “evicted” because they have no right to be there. By the magic of legal terminology, their homes and communities are encroachments, and thus unworthy of legal protection.

But the city’s bylaws willfully ignore the reality facing unhoused people in Trinity Bellwoods and elsewhere, especially during a deadly pandemic. They also ignore the city’s obligations to human rights in domestic and international law.

In 2019, after declaring a housing crisis, Toronto city council “affirm[ed] its commitment to complying with its obligations under International Human Rights Law.” As recently as last week, the city reaffirmed a human rights approach to housing.

The city’s commitments include the right to housing and protection from discrimination and forced evictions, as well as respect for Indigenous rights and self-determination, particularly given the disproportionate effect of the housing crisis on Indigenous people.

These commitments require that the city meaningfully engages with unhoused residents prior to making any decision about encampments. They require that housing be offered and that residents must have the choice to accept, or not, without force or coercion and based on their individual needs. They require permanent housing options, not temporary shelters.

Earlier this month, the city published an update on its COVID-19 homelessness response. The report states that the city will “exhaust all options available to help people move indoors” before encampment evictions begin. But until the city complies with all of its human rights obligations, it has not exhausted all options. Indeed, its actions on June 22 demonstrate that it has barely begun to build the relationships of trust required to “help” unhoused residents move into secure and long-term housing.

Estair Van Wagner is an associate professor at Osgoode Hall Law School. Alexandra Flynn is an assistant professor at the University of British Columbia’s Peter A. Allard School of Law.

One response to “Op-ed: Toronto uses doublespeak to remove encampment residents from parks”