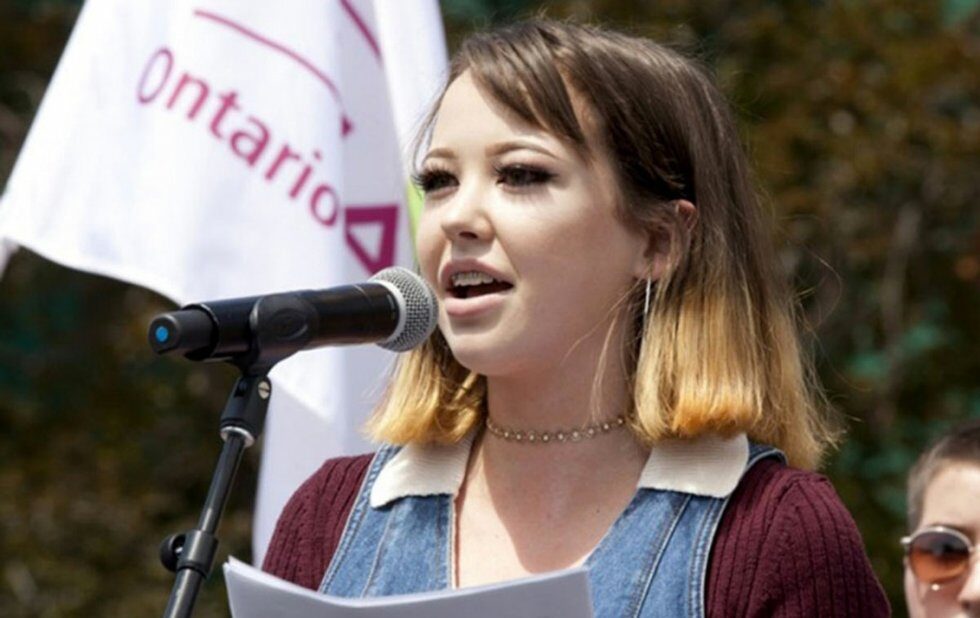 If Doug Ford’s government has proven anything, it’s that young Torontonians won’t sit back and be silent. Many have taken to different forms of activism to fight decisions made by the Conservatives. Here are three ways activists are making their voices heard.

Set in the 1970s, the protagonist is dissatisfied with the sex-ed curriculum and decides to educate herself and her peers. “It’s definitely a bit of a poke – if this girl in the 1970s is struggling to get comprehensive sex-ed then, it’s pretty significant that kids are having that exact same struggle now, in 2018,” Rideout says.

The film was inspired by an article Rideout read in 2015, when Ontario’s new sex-ed curriculum was introduced, about a father pulling his children out of school to prevent them from learning about pleasure. Shortly after, she began writing the script.

“I created this character that was totally open to learning about sex-ed and wants to learn more. She isn’t embarrassed by it, but is just so passionate and excited. It kind of normalizes it for me to have kids be like, ‘This is what I want to learn about,’” Rideout says.

Shooting begins in November. Rideout hopes the film will resonate with people and normalize sex-ed. “I would like to inject into the media or the zeitgeist: sex-ed is here, sex-ed is normal, sex-ed is great. It’s a great thing that can improve your life significantly and it’s something we should be okay with talking about.”

On September 21, nearly 40,000 students from over 100 schools across Ontario marched out of their classrooms protesting the repeal of the 2015 sex-ed curriculum and the lack of Indigenous education in schools. Rayne Fisher-Quann, a grade-12 student at William Lyon Mackenzie Collegiate Institute, organized the protest.

“What we were hoping to accomplish was to open up a conversation and to really show Ontario and the people in power that this isn’t an issue we’re going to give up on,” Fisher-Quann says. “It’s an issue that students and young people really care about and they have to listen to us.”

This all began in the summer when Fisher-Quann started March for Education. The organization held a rally on the front lawn of Queen’s Park on July 21 that brought out over 200 people. The student walkout in the fall, in collaboration with an organization called Decolonize Canadian Schools, went viral and took on a life of its own, says Fisher-Quann.

“Many people are so upset about this, because I think that this sex-ed curriculum was something, that in some way, every single person in our province had a stake in,” Fisher-Quann says, adding that this curriculum is important to keeping friends and families safe.

“Throughout my life there’s always been people who inspire me, and those are really people who take risks and who go beyond just tweeting about the issues,” she says. “I realized that nobody was going to stand up for the students and we had to stand up for ourselves. This is something that I really cared about so I decided to take it on.”

Humans Of Basic Income is an art exhibit featuring portraits of people affected by the July 31 cancellation of Ontario’s Basic Income Pilot Project. The exhibition was in Toronto, at Black Cat Artspace, from September 25 to 28.

Jessie Golem, operations manager of Photographers Without Borders, shot the series. Golem was one of 4,000 people on the pilot project when it got axed.

“I really believe in the power of visual storytelling to inspire people and create change,” Golem says. “This portrait series has really gained a lot of traction and has garnered national media attention, so people are reading these stories and are relating to what’s happening here.”

The photo series features people from Hamilton, Thunder Bay, Brantford and Lindsay, holding up white signs that detail how they have been affected by the cancellation.

Basic income is a global conversation right now with the rise of artificial intelligence and what that means for the economy, Golem says. Ontario had the largest study in the world before it was cancelled.

“To prematurely cancel a pilot, not only does it affect the people on the pilot, it affects everyone, because that research would have been so valuable to put toward a conversation on the world stage about basic income and the future of economics,” Golem says.

Golem says that prior to the election, the conservative government went on record saying that they would not cancel the pilot. Then, they did.

“This shows that they don’t exactly care for the most vulnerable in our society and I think that that sets a very dangerous precedent,” Golem says. “We cannot take this lying down and we need to hold our government accountable, especially with broken election promises.”