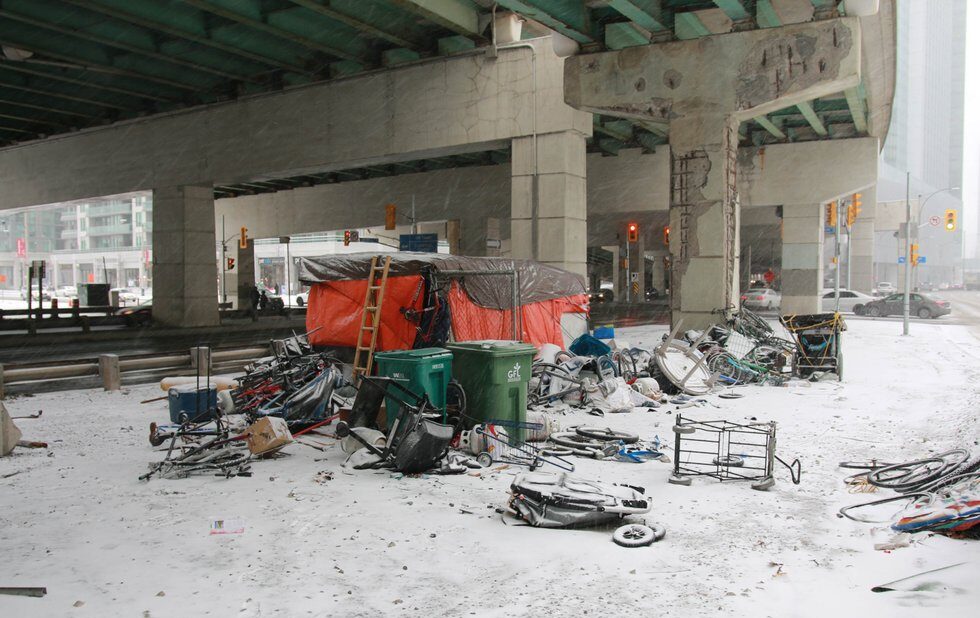 Last Saturday, I toured a stretch underneath the Gardiner Expressway where homeless people have built encampments. I was with Cathy Crowe of the Shelter and Housing Justice Network, who this week joined other activists in calling on Mayor John Tory to declare a state of emergency on homelessness in Toronto. So far this month, four people experiencing homelessness have died on Toronto’s streets. Crowe lets the people we meet know that outreach workers will soon be there to provide basic necessities and other assistance.

Some of the encampments have been here for weeks. Others were abandoned after the city gave them until the end of the month to vacate or be removed. Tory has since backtracked on that threat.

But despite chronic overcrowding at shelters, the mayor is refusing to open Toronto’s armouries for emergency use. He refused to open them during another January cold snap last year. It took 56,000 signatures on a petition to get Tory to change his mind.

Maybe the mayor should pay a visit to the encampments to understand the unnecessary human suffering that most of us only see from our car window – and that the city has a moral obligation to address. 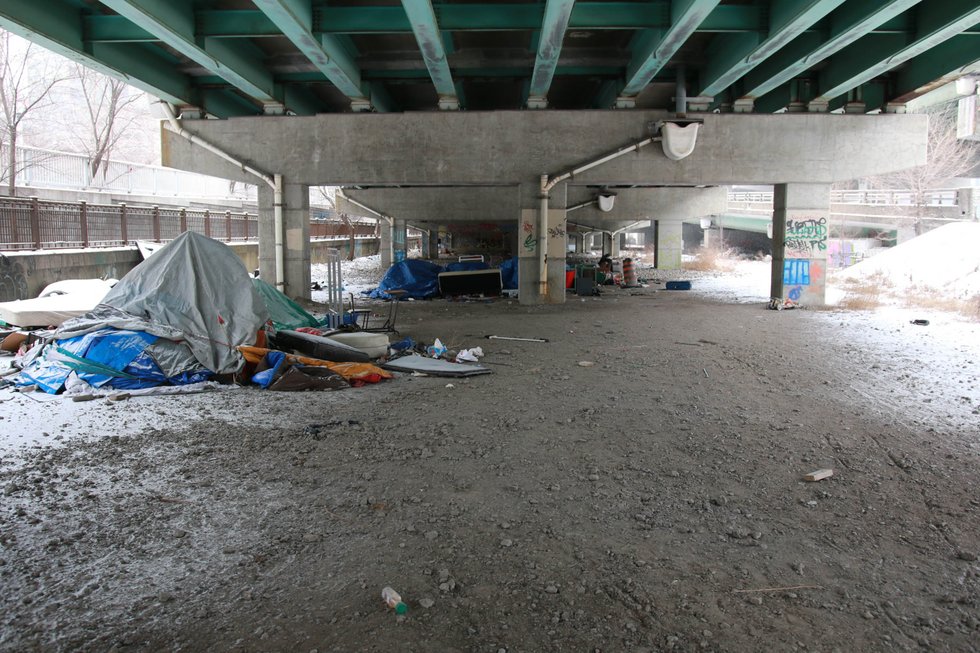 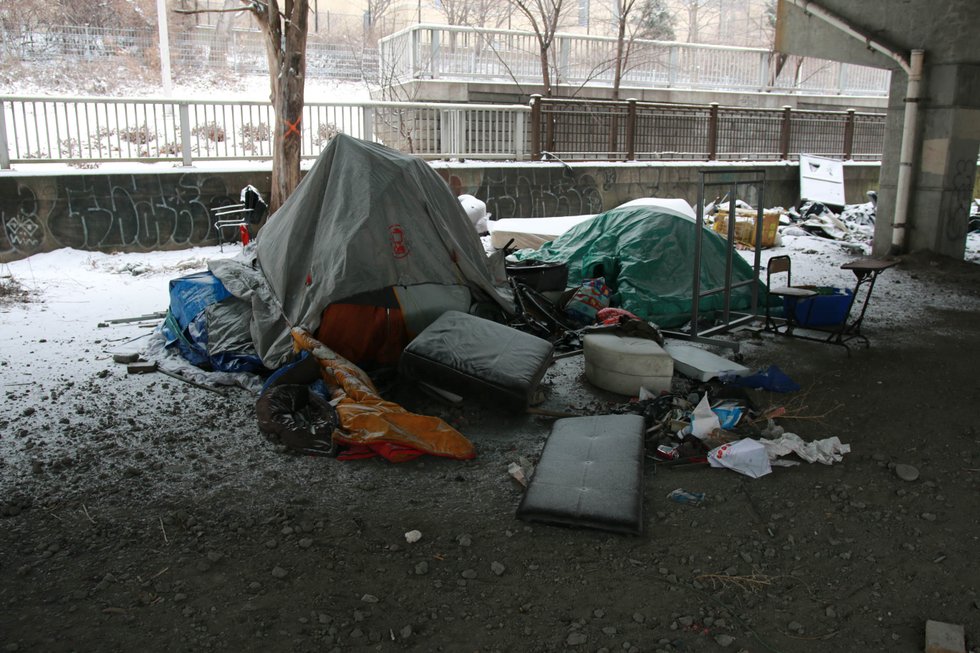 Facing east near Spadina is where most of the remaining encampments are concentrated. Standing here, it’s hard not to experience mixed feelings. On the one hand, I’m upset that this could be happening in our city. On the other hand, I am inspired by the courage of the people here to withstand such awful conditions – and not budge in the face of threats from the city to evict them.

They have, in effect, transformed public space into an ongoing protest to shine a light on the crisis of homelessness. But the problem is bigger than it’s ever been. On an average night in Toronto, more than 5,000 people are using the city’s shelter system.

Each individual has a story to tell. 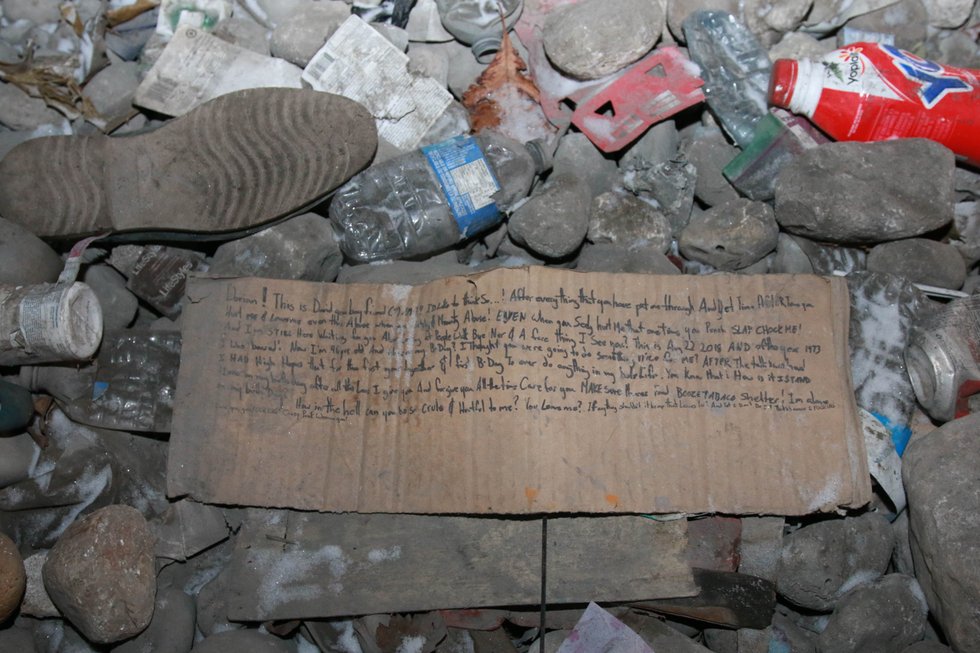 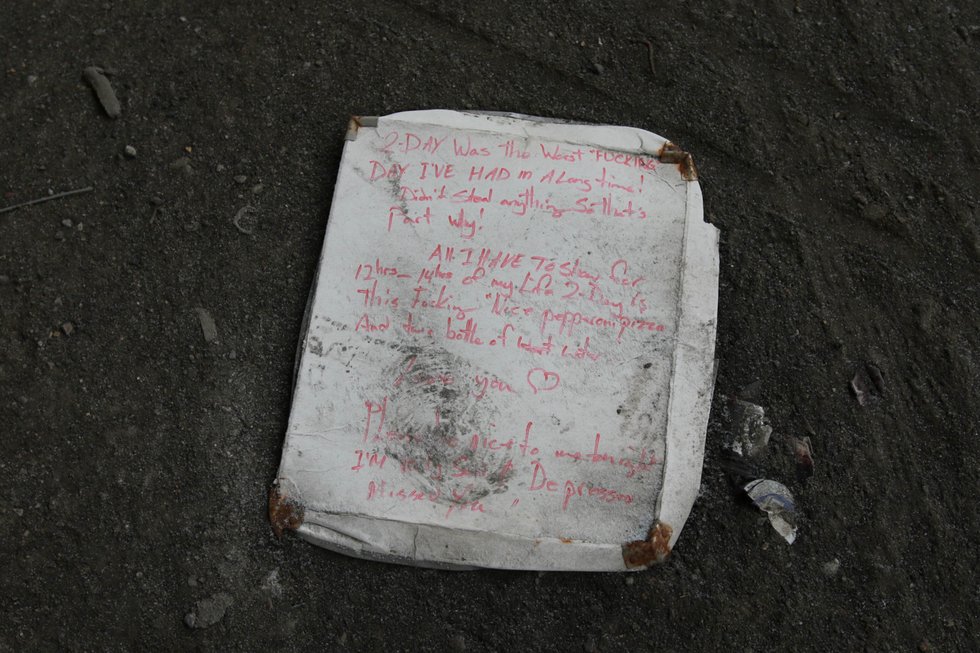 Under the Gardiner, I come across handwritten messages scrawled on discarded pieces of cardboard and other items. They speak of serious pain, suffering and alienation.

One anonymous author writes, “Please be nice to me tonight. I’m really sad and depressed.” The author of another recounts a story of love lost. “How in the hell can you be so cruel and hurtful to me? You love me? If anything shouldn’t it be me that leaves you?” The loneliness and despair come through. 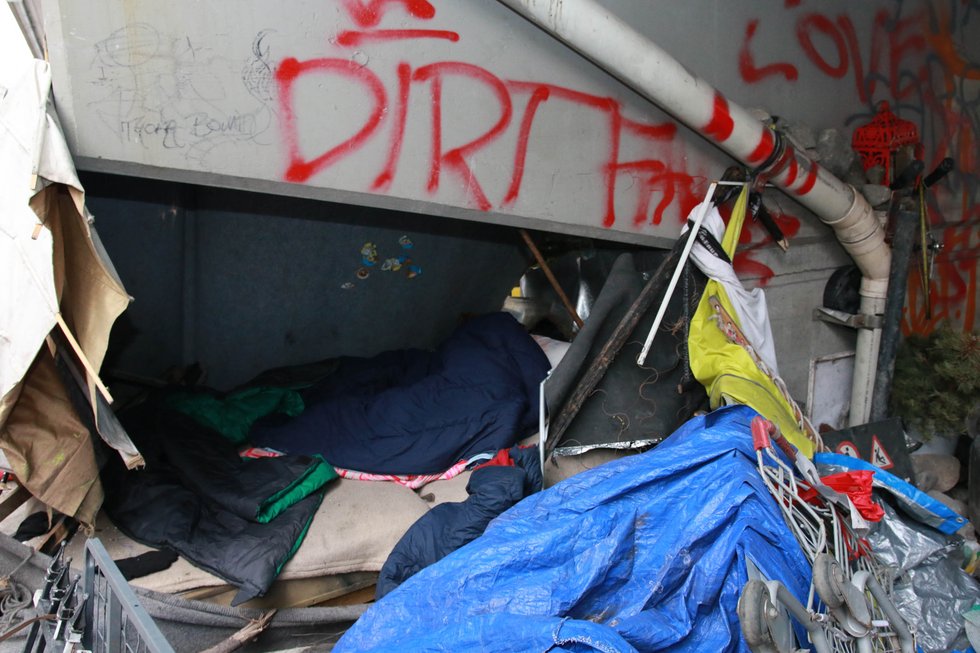 A figure laying completely covered in the blue sleeping bag doesn’t move until Crowe calls to see if anyone is there. A young woman emerges.

She did not respond to my earlier calls. It makes me wonder whether my male voice was threatening to her.

Trust is hard to come by when you are living on the street, especially for women, many of whom are fleeing abusive situations.

There’s a warming centre nearby, but the woman has chosen to stay here for the night. As dangerous as it is to sleep outside, for women the city’s shelter system can be just as unsafe – an estimated one in five homeless women using Toronto’s shelter system have been sexually assaulted. Besides, there is dignity in having your own space.

Crowe and I meet a gentleman who has built a square shelter made out of pieces of plywood and a section of chain-link fence and covered by a number of tarps held down by bungee cords. It stands right by the side of the road. He usually panhandles a few blocks away. There is something truly regal about him. He doesn’t fear the future despite his straitened circumstances. He says it’s important to be able to take life as it comes. His penetrating blue eyes have seen a lot. He expects little from the cruel world around him. 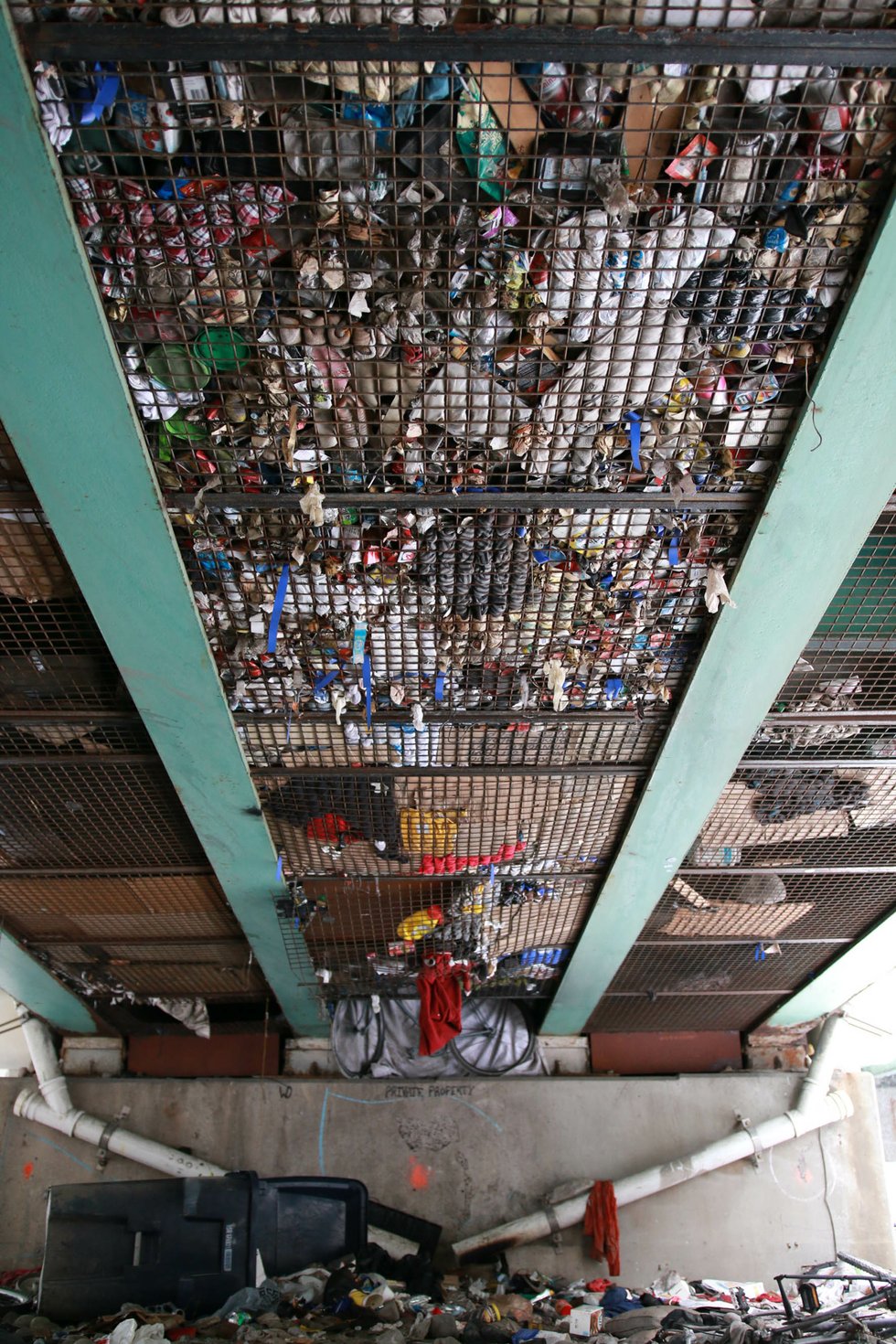 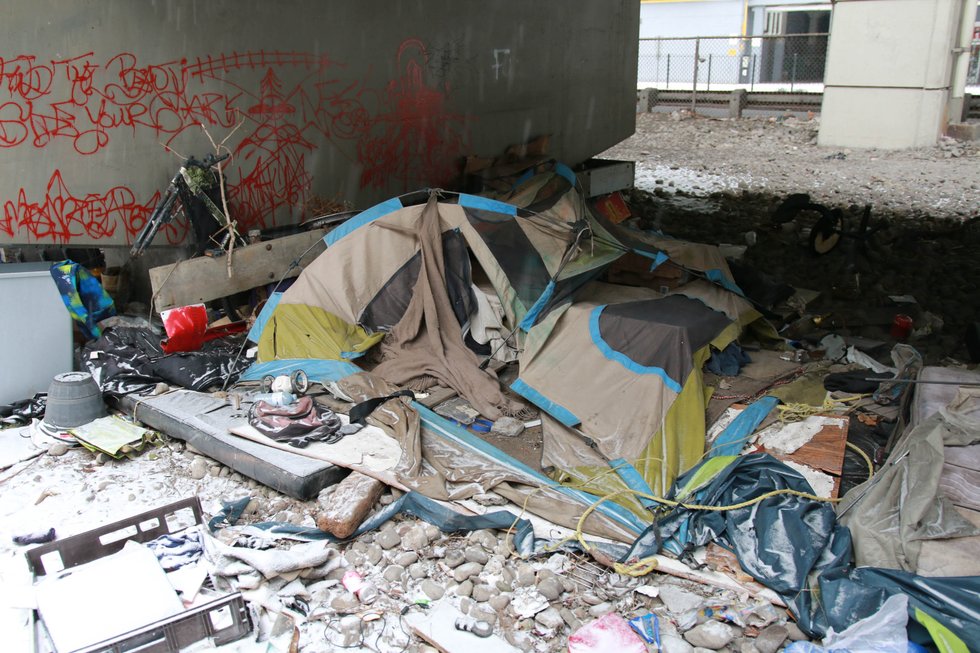 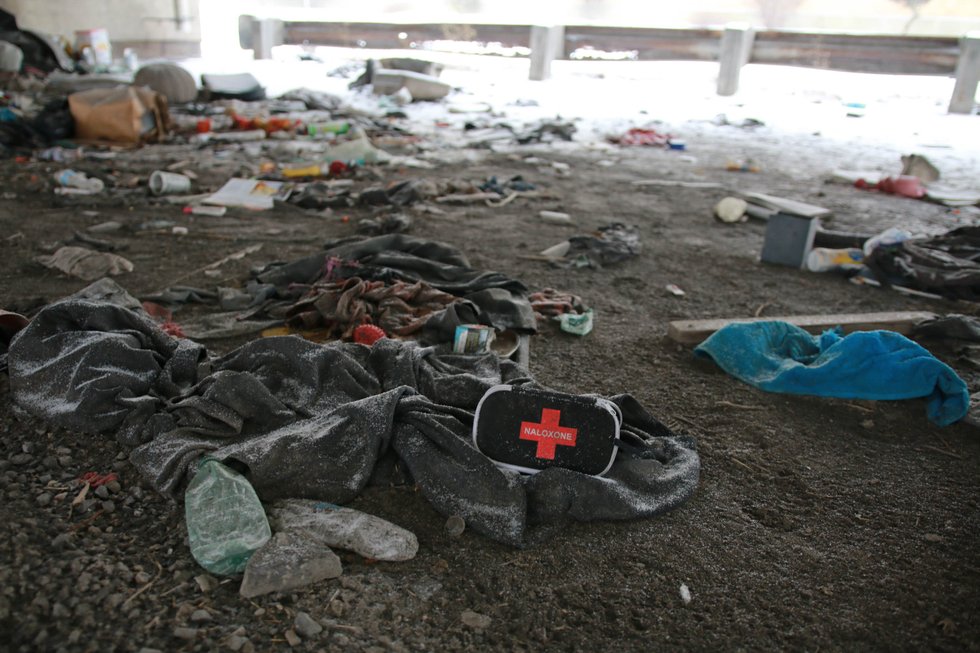 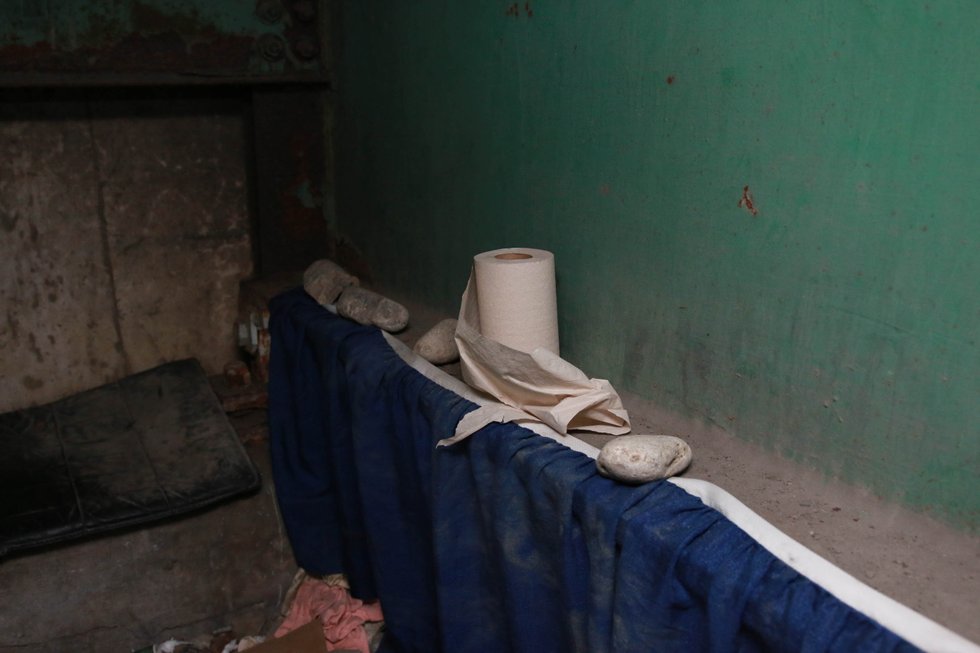 Steel grates that run along the concrete underbelly of the Gardiner are lined with garbage, forming a roof of sorts. The garbage protects the people beneath from dust and other debris falling from the Gardiner. It muffles the roar of vehicles overhead.

Blue tourniquets used to tie off circulation when injecting lethal drugs hang here and there amid the debris.

Nearby, a makeshift bed of cardboard is unreliably protected by a tarp that’s weakly secured by a few large stones. On one pillar, the names of some of those who died of homelessness-related causes are scrawled.

There are piles of garbage everywhere. Some of the piles act as camouflage for sleeping bags.

Casting shadows on the scene are signs of Toronto’s emergence as a playground for the rich – the luxury condos on the water’s edge and still more under development.

American psychiatrist M. Scott Peck observed that “evil originates not in the absence of guilt but in the effort to escape it.”

The city is failing in its responsibility to protect the lives of all its residents.

Those under the Gardiner are strong human beings, doing their best to survive. It is tragic and wrong that we have abandoned them. 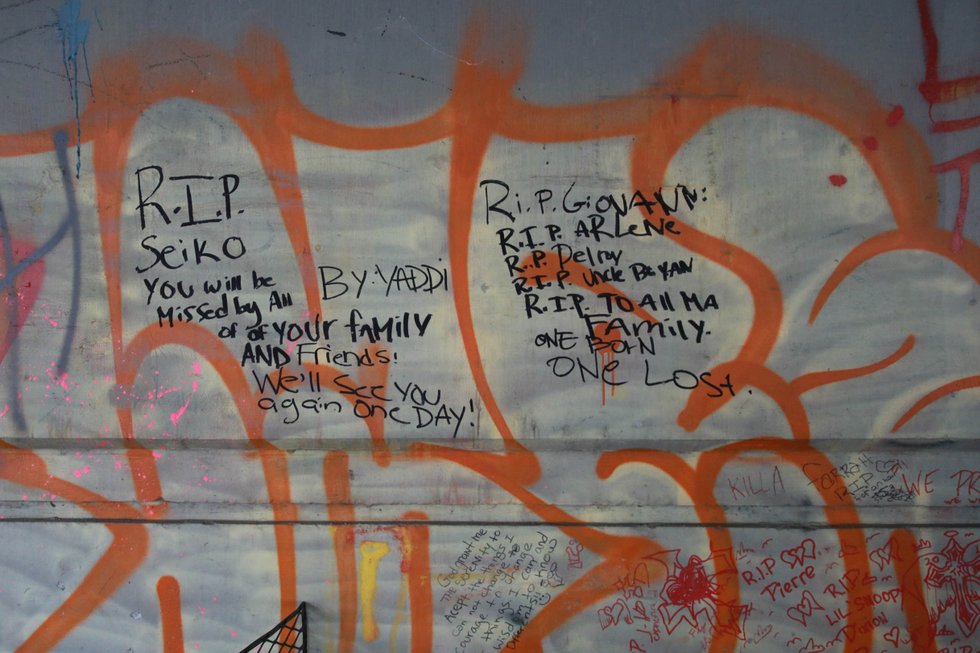 Updated Thursday, January 24, 2:17 pm: An earlier version of this story stated that the mayor ordered the eviction of homeless people from underneath the Gardiner. Although he backed their removal as part of “long established city policy,” it was city staff that actually issued the eviction notice.