It’s D-day for Toronto school board on Ford cuts 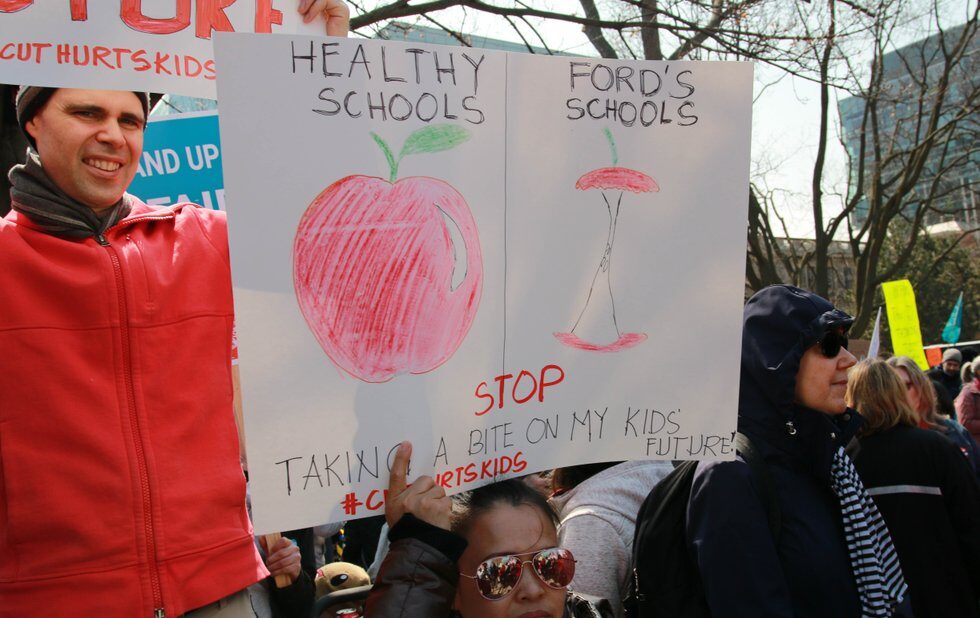 Last week, at 300 schools across Toronto and beyond, parents, students, staff and community members staged a Walk-In for Public Education.

These parent-driven events were the latest in a series of high-profile public actions underlining a simple and powerful truth: opposition to the Ford government’s unprecedented cuts to public education is widespread and growing.

Because of provincial budget cuts, the Toronto District School Board (TDSB) is faced with having to remove $68 million from the Board’s budget. Make no mistake: the scale of cuts will hurt and affect the quality of public education. Yet, the Education Act stipulates that school board Trustees must pass a balanced budget or risk the Board being taken over by the provincial government.

So we are endeavouring, wherever possible, to minimize the damage from these terrible and destabilizing cuts as the TDSB grapples with adopting a budget over the next week.

We’ve been listening to students, families and education workers, and we continue to work with our communities and each other to find ways to blunt the blow. But there are virtually no options left.

People are upset, and we don’t blame them. Many have shared their personal stories on what the loss of important supports like psychologists and social workers, speech and language pathologists, and guidance counsellors will have on their school experience. We have fought alongside parents to save international languages, transportation services and outdoor education programs, but we have lost learning coaches, library resources and IT resources.

Trustees are the community’s connection to a school system that can often feel huge and daunting in its complexity. This connection is particularly important at difficult times like these.  Whether in Toronto or elsewhere in the province, the goal of Trustees is a simple one:  to ensure that every student in the province has access to a high-quality education no matter who they are.

As we wrestle with these provincially-imposed budgetary challenges, we will continue to never lose sight of the strong and equitable publicly-funded education system that our students and our children need.

We hope that every parent and student in this province will let their MPP and neighbours know what is at stake and join us in holding this provincial government to account.

Ontarians have spent generations building a world-class, publicly-funded education system.  It falls to us all to safeguard that legacy.