Complacency and fatigue probably had a lot to do with the disarray at the popular downtown park this weekend, but where does personal responsibility fit in all of this? 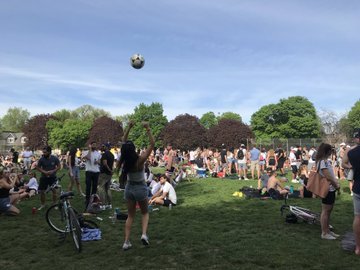 City staff are discussing painting “social distancing circles” on the lawns of city parks to enforce physical distancing requirements and prevent scenes like what happened in Trinity Bellwoods Park on Saturday.

Board of health chair Joe Cressy says the city is exploring a number of design options and “pre-emptive measures” at “destination parks” like Trinity Bellwoods. Those might include sending out city staff to educate park goers on the need for physical distancing before crowds gather and get out of hand.

That’s what the city did on Sunday and there was no repeat of the rule-breaking witnessed on Saturday after several thousand people gathered to party in the park. But Cressy admits that option is not always going to be the most practical.

To be sure, there are many lessons to be learned from the backlash caused by thousands of people flaunting physical distancing rules at the popular downtown green space this weekend.

Some observers blamed “entitled millennials.” Some blamed the city for lack of park space. Some blamed bylaw enforcement officers for not ticketing the throng. Others blamed mixed messaging from politicians and public health officials at all levels of government on rules governing the wearing of masks and physical distancing.

Mayor John Tory didn’t help matters by showing up at the park on a fact-finding mission only to be photographed failing to wear a mask or practice social distancing – although in his defence that was hard to do given all the people kicking around. He issued an apology later.

But the Twitterati were predictably offended that city officials expressed disappointment and were happy to make excuses for those showing a blatant disregard for public health warnings, whose actions were varyingly described by city officials, including the city’s chief medical officer of health Eileen de Silva, as “selfish” and “dangerous.”

Complacency and fatigue probably had a lot to do with the chaos, offers Tim Sly, professor emeritus in epidemiology at Ryerson University.

“We have been hearing the same message from months now. It begins to become not even noticed,” Sly says.

But where does taking personal – and social – responsibility fit in all of this?

Sure, it’s been tough staying cooped up inside. And it’s also true that the city could be doing more to afford people more space to roam. Opening up a few streets ain’t gonna cut it. More radical measures should be taken to free up public space to walkers, bikers and those who just want to sit in the sun. Sending out bylaw enforcement officers to ticket people who aren’t adhering to the social distancing rules is not the answer.

But it’s also true that Toronto has some 1,500 public parks and green spaces, and no issues with physical distancing were reported at any of those over the weekend. Do we need more green space in the downtown? Of course. But as Cressy rightly points out, “Even if we opened up all space in the city to the public we still need people to follow the rules.”

And while wearing a mask remains optional in some public settings, there’s no excuse for not keeping to physical distancing rules. There should be no confusion over that. It’s been repeated daily for weeks.

Presumably, those who ended up at Trinity Bellwoods on Saturday didn’t just appear at the park simultaneously. Those who arrived when the park was filling up made a conscious decision to throw caution to the wind (or just say fuck it). They could have just as easily walked down to Stanley Park, or the waterfront or decided to take a walk instead, but they didn’t for reasons known only to them. Was it out of selfishness or convenience?

The pandemic has placed many impositions on our lives. We have to wait in line to get into the grocery store. We have to keep to our small social circle. We have to wash our hands more times a day than seems humanly possible. It’s not ideal, but it is what it is. And in the grand scheme, it’s required if we want to come out of this with fewer dead bodies.

Because don’t look now but the number of daily cases is going up. And they will continue to go up as the weather gets warmer and more people head outside, restrictions are loosened and the economy is reopened. Ontario and Quebec are the only two provinces where the number of new cases are continuing to increase.

Physical distancing is important not only to contain the spread of the virus, but to be able to track and trace cases easily when it does spread. That’s impossible to do if the public is ignoring the rules and not confining their interactions to the prescribed limit of five people or their immediate family.

Sly offers a sobering number: at the current rate of the spread, it will take up to two years (you read that right) before it reaches 55 to 60 per cent of the population and we start to see its effects die down. We’re currently at about two per cent of the population. Which is to say that we can’t risk being willy-nilly about the rules to keep our distance as public health officials loosen restrictions to help us deal with the psychological fallout from self-isolation.

It’s not helping the issue, says Cressy, that the province is “rushing” to reopen the economy without following its own criteria. “It’s not a recipe for success,” he says. Neither is painting huge circles on the lawn of city parks to make sure people keep their distance a foolproof solution.