The art of War

TPW show has many dimensions 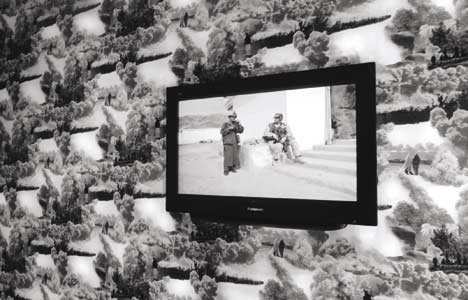 Francesco Simetis wallpaper makes YouTube videos stand out in War At A Distance.

Lucky North American civilians have only experienced war at a distance, but changing modes of depicting armed conflict are influencing our ideas about it. This show by Gallery TPW, in collaboration with Ryerson Image Arts and OISE, stands out for including a mix of representations of war – personal, journalistic, dramatic and visual.

The front hallway holds an installation of Francesco Simeti’s wallpaper, pretty (at first glance) repeat patterns of billowing smoke and Middle Eastern figures taken from news photos, against which a TV screens YouTube videos by Canadian soldiers in Afghanistan.

Photographer Suzanne Opton’s diptychs juxtapose headshots of U.S. soldiers and Iraqis. Adoring women, some represented only by hands or hair, disconcertingly embrace the male soldiers. Unlike mainstream news, Opton lets the Iraqis testify in text about their harrowing experiences, while the only info on the soldiers is the number of days they’ve served.

Stephen Andrews uses hand-made drawings interpreting dot matrix printing to make an animated film, The Quick And The Dead, based on footage of a soldier putting out a tire fire as a half-naked corpse lies in the foreground. His attractive painterly technique makes the carnage of the ambiguous scene all the more shocking.

Textile artist Allyson Mitchell turns serious in a video in which she layers a granny-square afghan, an Afghan war rug from the Textile Museum, bits of knitting and newspapers, calling to mind attempts to deal with or repress images of war.

The journalistic and dramatic works – Louie Palu’s vivid front-line photos selections from the Globe & Mail’s fascinating Talking To The Taliban videos, in which Afghan fighters answer questions about themselves and the war and CBC Radio play Afghanada – are as strong as the artwork, and add another dimension to this multi-layered yet accessible show.