Still in the early planning stages, the $8 million standalone gallery will be located steps from the York University subway station

Thanks to a $5-million donation from patrons Joan and Martin Goldfarb, York University is planning to build a standalone new home for its contemporary art gallery.

Still in early planning stages – the search for an architect has yet to begin – the new AGYU location will be adjacent to the current gallery in York’s East Accolade building, just steps away from the York University subway stop.

“The new gallery gives the AGYU an opportunity to expand its art collection,” explains AGYU director Jenifer Papararo, adding the school is pitching in $3 million toward the building. “The current collection is limited mostly due to limits in storage.”

Papararo, a Torontonian who recently returned to the city to lead the AGYU after stints running galleries in Vancouver and Winnipeg, will head up the project. She hopes the new building will be open in two years.

It’s not confirmed yet whether AGYU will continue to occupy the current gallery after the new one opens, she says. Details around the new location also have to be worked out.

“Decisions have not been made yet about how the building sits in this location,” says Papararo.

“The gallery’s location on the subway [line] is huge,” says Toronto-based museum planner and consultant Gail Lord. “And the accessibility of North York to the rest of the province is very important.”

Lord sees the initiative as contributing to an ongoing democratization of the arts across the city. Recent developments include the city’s new public art strategy, which will get a big push in 2021, and annual art event Nuit Blanche’s forays into Scarborough, Etobicoke and North York.

She notes the new gallery will join the Ontario Science Centre, the Aga Khan Museum and the Meridian Arts Centre as North York venues with an arts focus.

“The data tells us the more art presented, the bigger the arts audiences,” she adds. 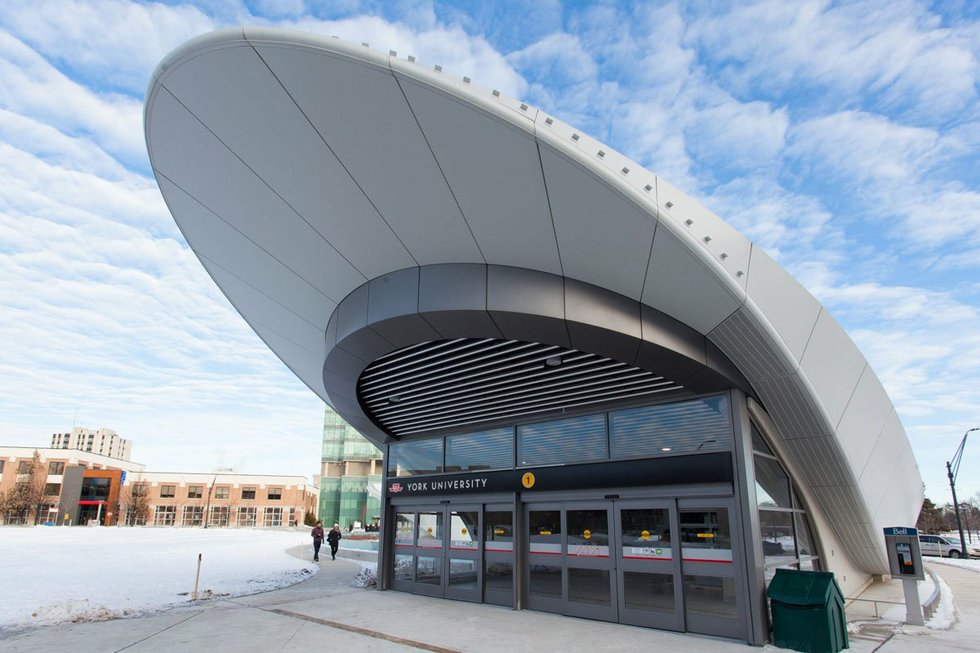 A standalone art gallery at York University subway station would make the area more of a destination.

Before the Toronto-York Spadina subway extension opened in 2017, getting to York University was an arduous journey for students and gallery goers reliant on public transit.

The new subway stop meant the commons space situated just beyond the entrance has become more animated. An art gallery would only make it more of a destination.

“The new building could break out into this space,” Papararo says. “It has the potential to be a focal point of the campus.”

How might the new gallery fit in with the York’s large, brutalist concrete structures, which were built in the 1960s?

Newer buildings tend to stand out as experiments in new architectural styles, a sometimes risky gamble. The Bergeron Centre, home of the Lassonde School of Engineering, is one such example on the York campus, with its modish curves and showy glass facade. When asked if there’s an opportunity for the school to build an iconic architecture, Papararo’s response was measured.

“The architect’s vision shouldn’t fight the use,” she says.

It’s a consideration that has special relevance to an art gallery. The building should not overwhelm visitors’ ability to experience artwork. “It’s important to picture the body in front of the artwork,” Papararo says, “and the building should also be situating the viewer within the experience.”

Getting bodies in front of artwork is a challenge all galleries face.

Papararo’s predecessor was writer/curator Philip Monk, who helmed the AGYU for 14 years. Along with senior curator Emelie Chhangur, he made community outreach an integral part of programming – not just token gestures toward inclusivity.

Under Chhangur, the AGYU commissioned a short film by artists Bárbara Wagner and Benjamin de Burca and Scarborough collective R.I.S.E. that was shot in the Toronto-York Spadina subway extension. It screened at the Toronto Biennial of Art last fall and is currently exhibiting at the Jumex Collection in Mexico City.

The AGYU’s current programming includes a collaboration with R.I.S.E. Edutainment, which kicked off with a series of arts-based workshops for youth at the Malvern public library. They will take place through June.

The AGYU opened in 1988 and moved into its current 3,000-square-foot space in 2006. The gallery served as commissioner for Rodney Graham’s celebrated 1997 Venice Biennial and has had a strong publishing program. Especially under Monk, the AGYU has focused on exhibitions that  document the history of the Toronto art scene. Major shows have included The 1984 Miss General Idea Pavilion, Will Munro: History, Glamour, Magic, and DONKY@NINJA@WITCH by FASTWÜÜRMS.

The university’s Keele campus is also home to a Centre For Fine Arts, established through a donation from the Goldfarbs in 2001.