Inside the ROM’s Winnie-the-Pooh exhibition

A touring show dedicated to A.A. Milne and E.H. Shepard's beloved characters touches down at the Royal Ontario Museum – and it's wonderful 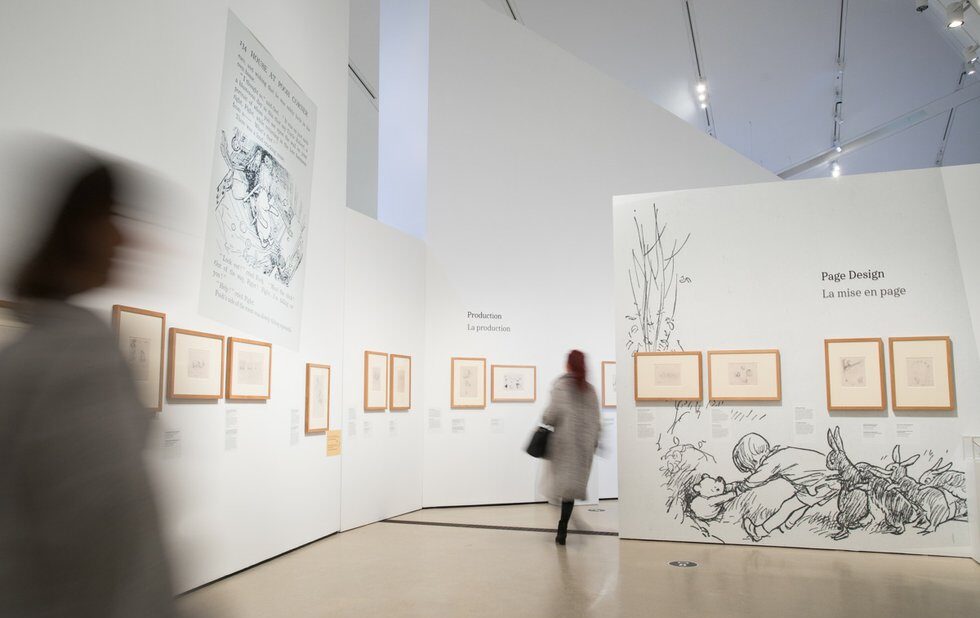 “Children of all ages” is kind of a dumb phrase, isn’t it? Children are children adults are adults. It’s how we navigate the world. But sometimes we get to reconnect with our younger selves through music or art or an image, and it all comes rushing back.

That happened for me when I saw the Winnie-the-Pooh exhibition at London’s Victoria & Albert Museum in 2018, and it happened all over again this week, at the Royal Ontario Museum’s press preview for the touring version, Winnie-The-Pooh: Exploring A Classic.

Like the V&A’s presentation, the ROM’s show is devoted to the simple, pure beauty of A.A. Milne’s words and E.H. Shepard’s images of the Hundred Acre Wood and its inhabitants, all of whom are based on stuffed animals belonging to Milne’s young son Christopher Robin. (Christopher Robin himself is also there as a character, though if I’m being honest things are a little less interesting when he’s around.)

The ROM’s exhibit is laid out in the Roloff Beny Gallery within the Michael Lee-Chin Crystal, making for a brighter experience than the V&A’s more reverent space. But the floor plan sticks close to the V&A’s model, leading visitors on a winding path lined with Shepard’s sketches and drawings. 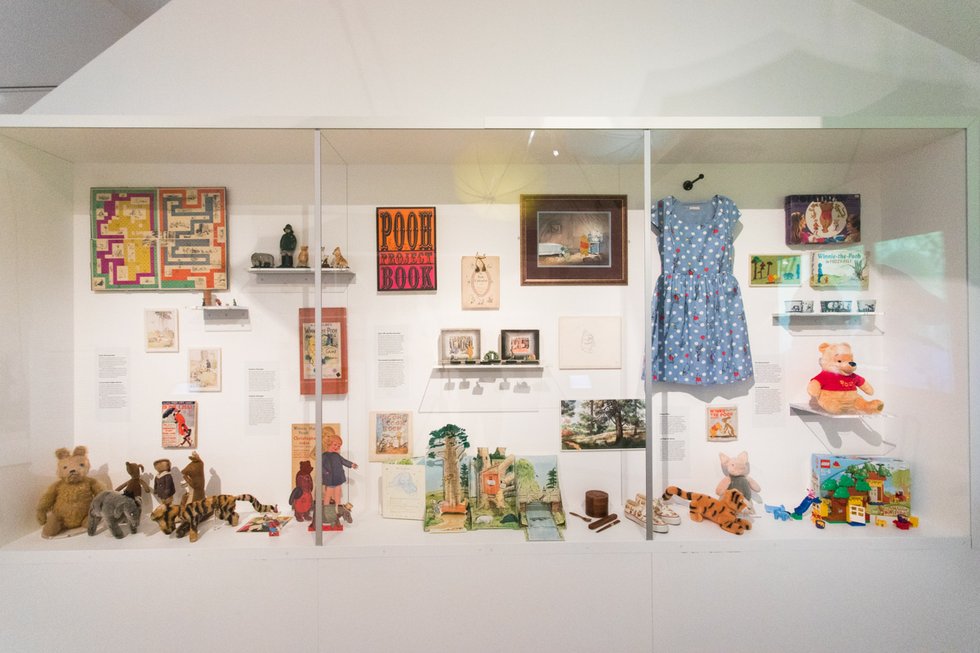 An assortment of Winnie-the-Pooh merchandise aimed at British children throughout the years. That’s an official LEGO set at bottom right. 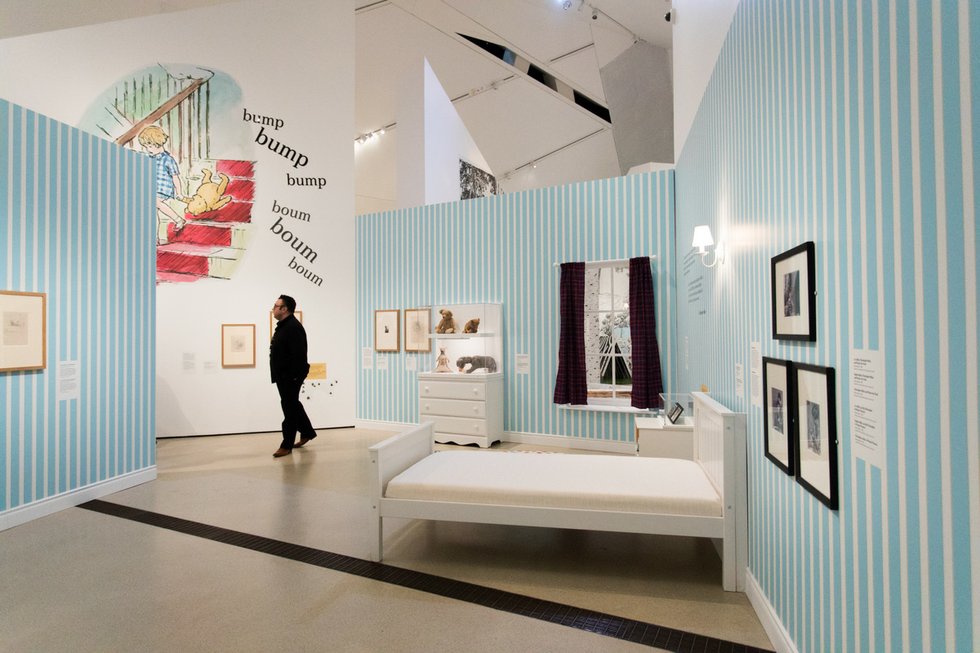 Younger visitors are encouraged to sit on a re-creation of Christopher Robin’s bed.

There are other things to see, many of them aimed at children who might grow bored peering up at the artwork. There’s Christopher Robin’s bed to sit on, a “forest” of black and white birch trees to run through, a modest plastic slide, a “hunny dining table” that’s basically a place for kids to sit and colour while their parents or guardians bliss out on the replicas of the original stuffed animals that inspired Milne.

I was particularly impressed by the interactive touchscreen that places Milne and Shepard’s four books (When We Were Very Young, Winnie-The-Pooh, Now We Are Six and The House At Pooh Corner, all published between 1924 and 1928) in their historical context, letting visitors page through contemporaneous magazine articles and other ephemera to trace the development of both the characters and the prose. The ROM might want to put a handwashing station right next to it at kid-height, that thing is going to get awfully filthy awfully fast.

There are also collections of Pooh memorabilia spanning almost a century, tracking the characters’ embrace around the globe. Were you aware of the Russian variant, Vinni-Pukh, who had his own cartoon and radio show?

This being the show’s sole Canadian stop, there’s also a special section devoted to the “Winnie” part of Winnie-The-Pooh. As the Heritage Minute tells us, the character was inspired by a real black bear from White River, Ontario, who was brought to England in 1914 by Canadian army veterinarian Harry Colebourn. Named for Colebourn’s home of Winnipeg, Winnie ended up at the London Zoo, where the Milne family encountered her. Colebourn’s diary is part of the exhibit, with “bought bear, $20” clearly visible on the page. 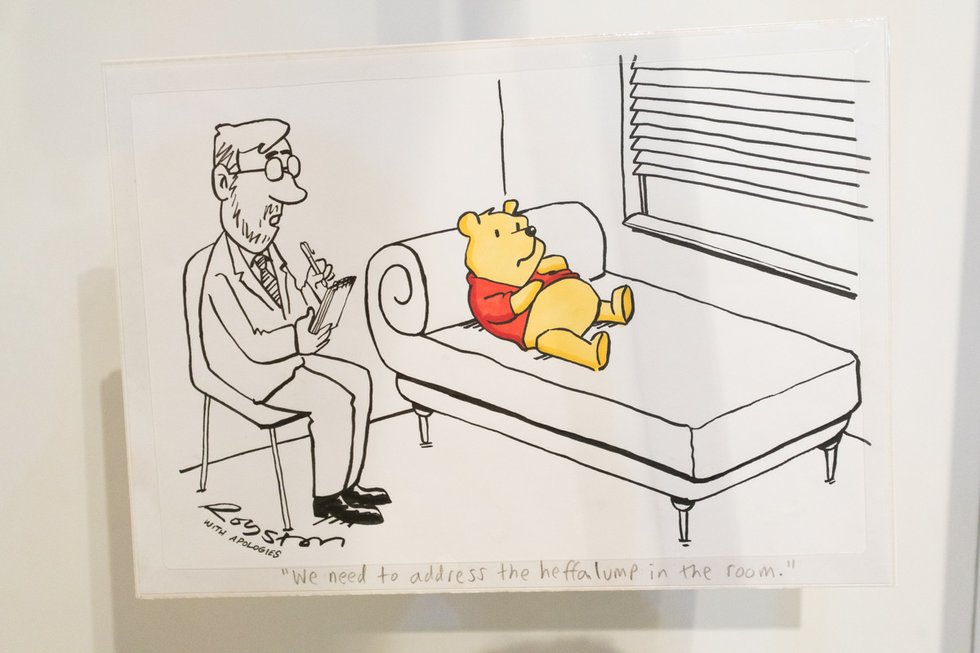 One of several examples of Pooh in pop culture. 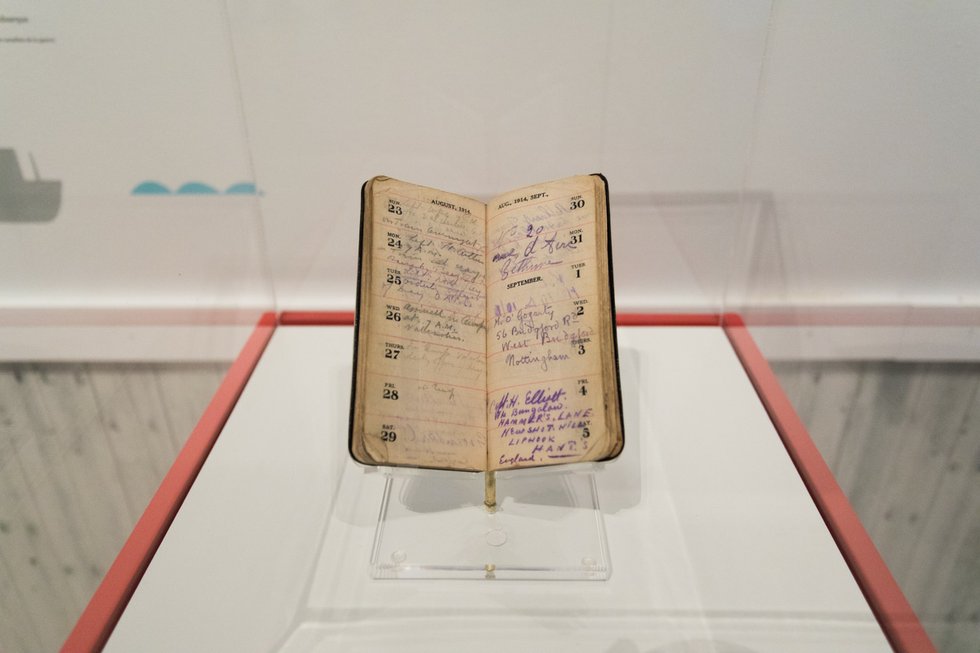 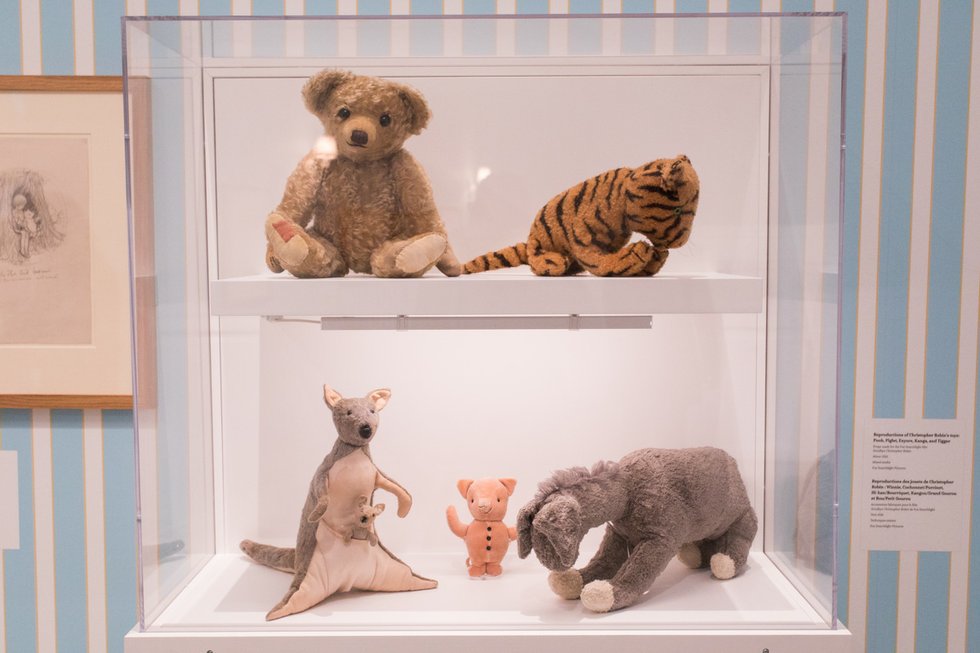 Still, all of these elements are just there to support the words and pictures. More than 80 drawings and sketches are assembled here, from studies of Christopher Robin’s toys (“Tigger, drawn from life” is a personal favourite) to rough versions of book covers. Shepard’s simple, spare art, with Milne’s text written underneath or to the side, is whimsical in the best way, the minimal detail in Pooh, Piglet and Eeyore’s faces somehow proving more expressive than Tigger’s popping eyes or Owl’s haughty physicality.

It’s very moving to encounter one of the first iterations of a character you’ve loved your entire life one can spend hours staring at these little pictograms, and hours more watching one’s fellow visitors well up at an image that has specific meaning to them.

I can’t imagine Milne and Shepard ever expected their little woodland characters would still be around almost 100 years later, or how fiercely we’d hold them to our hearts. But here we are, blinking back tears at little scratchings of pencil and ink. Now we are six again. 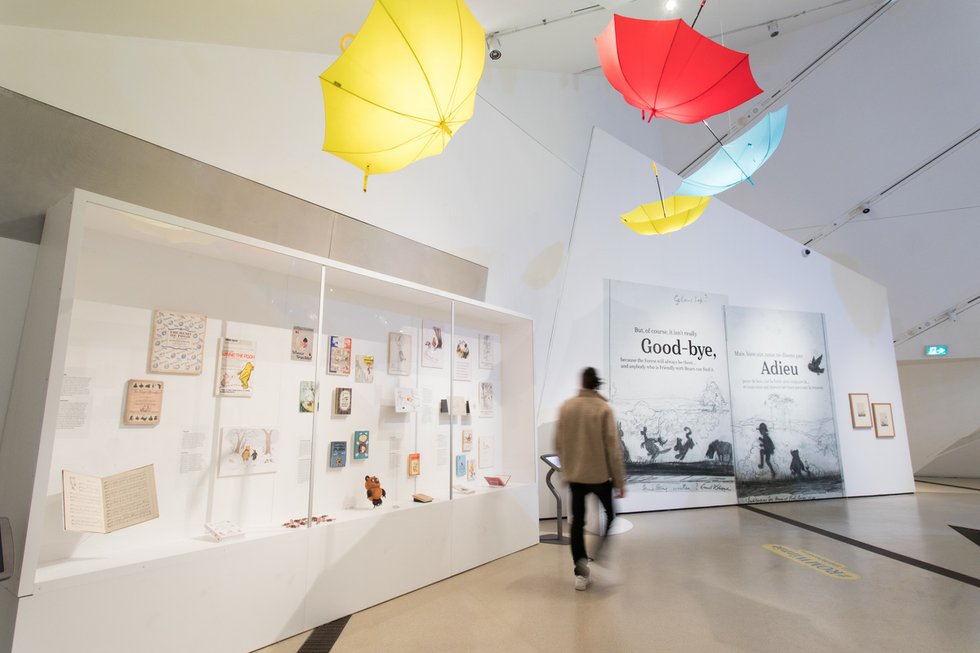 Milne’s characters never had much luck with umbrellas.