Five party games you can play with your friends on Zoom 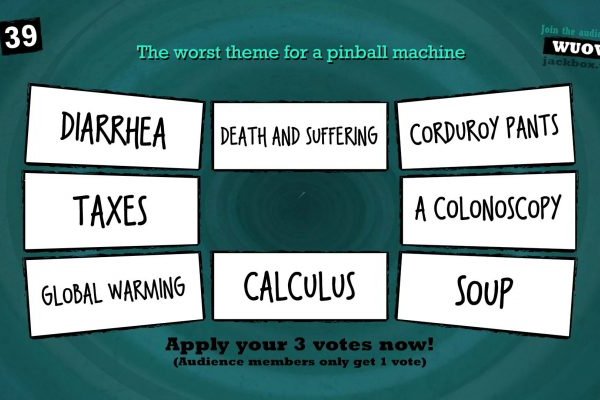 Are you tired of Zoom hangouts with your friends? Have you already had as many glasses of wine as you can handle while talking over each other and saying “no, you go” in accidental unison? That’s what party games were made for.

Traditionally, these alternatives to Pictionary and Charades would be played in person as a way of spicing up a group hang, but many of them can be easily adapted to video chat versions for social distancing. Some have been made specifically for those purposes. Here are five games you can play remotely with your friends.

Jackbox, the game company behind You Don’t Know Jack, definitely didn’t make its Steam party games specifically for the age of physical distancing, but they were perfectly positioned for it. The games take simple concepts, like Pictionary, trivia and password, and twists them into novel and often laugh-out-loud funny new versions. The games plays across multiple screens, with each person’s phone becoming a controller, so it’s perfectly suited to screen-sharing video apps like Zoom. So instead of a virtual happy hour (or during it) you can defuse a bomb with your friends, or vote on who can make the best butt pun in Quiplash, or bid on each other’s phone doodles in a virtual auction. And because of COVID-19, all of their party packs are on sale. They’re all worth trying.

This professed “party game for horrible people” is designed to trigger some deep taboo laughs, and often works, though it can also be legitimately uncomfortable when it allows people play up racism and homophobia for the lols. Still, it’s the game of choice for many parties, often brought out after a few glasses of pinot with a smile that says “can you believe we’re doing this?” You can buy a deck or download and print your own free deck on Cards Against Humanity’s website (which first makes you promise you’re social distancing before the sale is made), then play with your friends on video each with your own deck. Or because of its Creative Common license, you can try one of the clones, made specifically for social distancing: Pretend You’re Xyzzy or All Bad Cards.

There’s plenty of pub trivia night that have migrated online, and HQ Trivia has also risen like a zombie from the dead. But if you want to quiz your own friends, answer-and-question style, this is the way to do it. Designate one person as the Trebek, have them make a Jeopardy board and then have your friends ring in and answer. Or use one of the many pre-existing ones, like these sports ones created by a writer from Temporary Unnamed Sports Blog (a.k.a. the non-scabby short-termed version of Deadspin). Check out Jeopardy Labs here.

This game you’ve probably played at a party or a kid’s birthday party became big business when Ellen DeGeneres launched a mobile version based on a segment on her show. Instead of a piece of paper or a headband, this version makes your phone the game board. Put it up on your forehead so your friends can see it but you can’t and try to guess based on their hints who you are. It’s easy to play over Zoom or hop onto video chat competitor Houseparty, which has Heads Up! (along with trivia and other games) built right in.

This underrated video chatting app is like a party game machine in and of itself. You can play poker tournaments or any other card game, play against your friends on built-in classic Nintendo games from NES and SNES emulators, play Cards Against Humanity (yet another version) or the video game OpenArena. You could throw a Mario party (but not Mario Party – that one didn’t come til Nintendo 64).