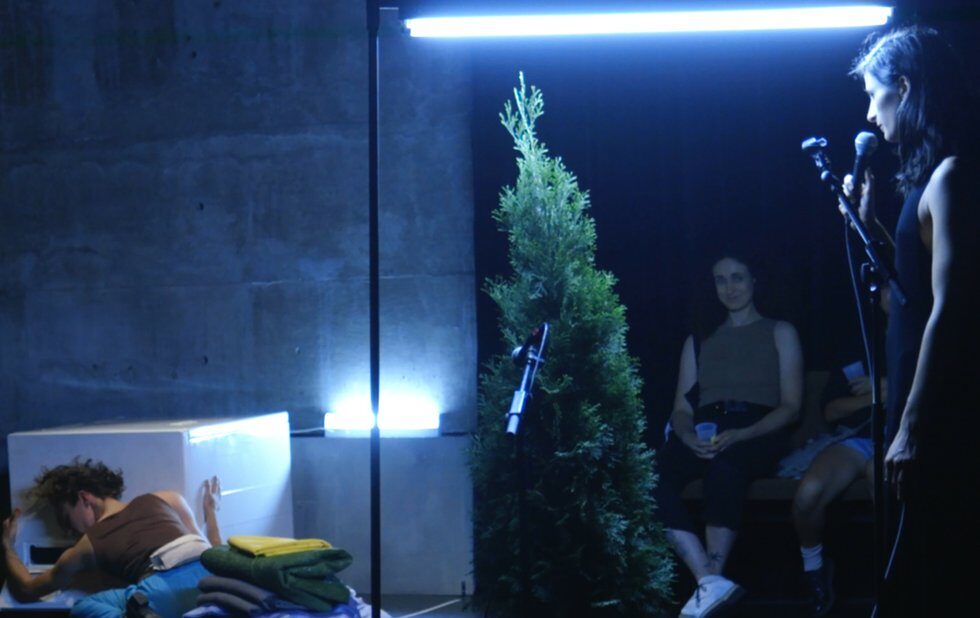 This collaborative performance piece doesnt just ask the audience to reflect on performance. The creator/performers (Burcu Emec, Michael Martini, Nien Tzu Weng and Roxa Hy) literally invite us onstage to contribute to the show in what amounts to just under an hour of guileless, spontaneous play that sparks deeper questions about the value of participation.

First, were invited to complete various tasks on the different “stations” onstage: watering a tree, fetching water, folding laundry. Next, were asked for more creative contributions, and during the performance I attended one audience member did some impressive juggling with rolled up socks. Throughout, an audio recording of someone recounting their disappointing experience with audience participation plays on a loop.

I’m not typically someone who eagerly volunteers for things, but after a while it felt difficult to resist, and I took a video of various scenes playing out on stage (one of the many things they count as participation). As Martini looked at my (in my opinion, quite basic) video, he earnestly exclaimed, “Wow, thats fantastic!” and handed me a fistful of tokens.

This got me thinking about why some participate and others dont. It certainly feels vulnerable and risky. Some might have mobility issues, or other health issues that prevent them from joining others might have had bad participation experiences in the past, and some might simply prefer to observe for one reason or another. Even then, those observing looked like they were having a blast, looking on with active interest or amusement.

The second section of the show the “poetic sequence” is a comically absurd scene featuring a woman (Emec) having an intimate conversation with a tree. While the scene doesnt seem to be explicitly thematically linked, at this point the audience is game for anything, and we all watch in delight as she ramps up the physical comedy.

During the final section, where we exchange tokens for cash, I found myself wondering about the value of labour as people were paid different amounts for different tasks seemingly randomly, since towards the end of the first segment Martini was giving out bunches of tokens just to get rid of them.

The show seems like a wacky social experiment, but despite the aura of frivolity and silliness, I walked away feeling like Id been a part of an event that asked questions about what it means to participate in a time when coming together, socially and politically, is more important than ever.