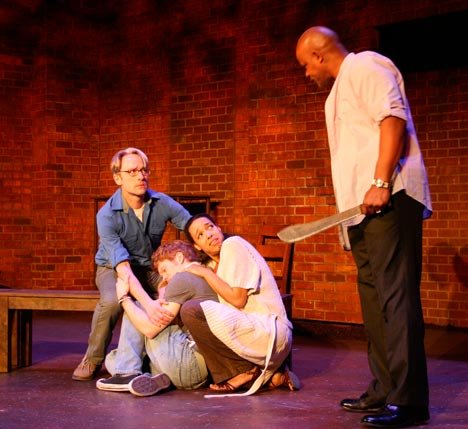 Styled as a political thriller, The Overwhelming explores the roots of the 1994 Rwandan genocide from various viewpoints, offering a wide array of characters and most if not all of the theatrical tension that the story deserves.

Gasana, a doctor, is nowhere to be found, and Jack uses his contacts and the influence he feels is his right as an American citizen to locate him.

Almost all of playwright J.T. Rogers’s characters wear a politic mask, revealing as little as possible to others. The result is a prismatic look at truth, with Jack as our eyes in the play. Unfortunately, the writing sometimes makes him so naïve that viewers are several steps ahead of him.

Studio 180’s Director Joel Greenberg gets fine performances from the cast, though the stress between members of the Exley family could be more sharp-edged and dramatic. Storch is good at being not the ugly but rather the innocent American, stepping into a foreign culture he doesn’t understand.

Similarly, McMurtry-Howlett is most convincing when he’s interacting with Karim Morgan, who plays Gerard, the family servant who introduces Geoffrey to Rwandan culture and nightlife.

Williams provides some of the production’s most nuanced work his Joseph knows how to mix smiles and warm words with an underlying sense of danger. There are other strong performances by Andre Sills as several scary power figures, Hardee T. Lineham as an American diplomat with his own agenda, Paul Essiembre as a knowing French diplomat and Audrey Dwyer as several women selling different sorts of wares.

Greenberg skillfully orchestrates the journey to the story’s chilling final scene. It’s here that we understand what people will do to save themselves as well as maintain their illusions of what is right, and maybe in the process we learn something about ourselves.[rssbreak]