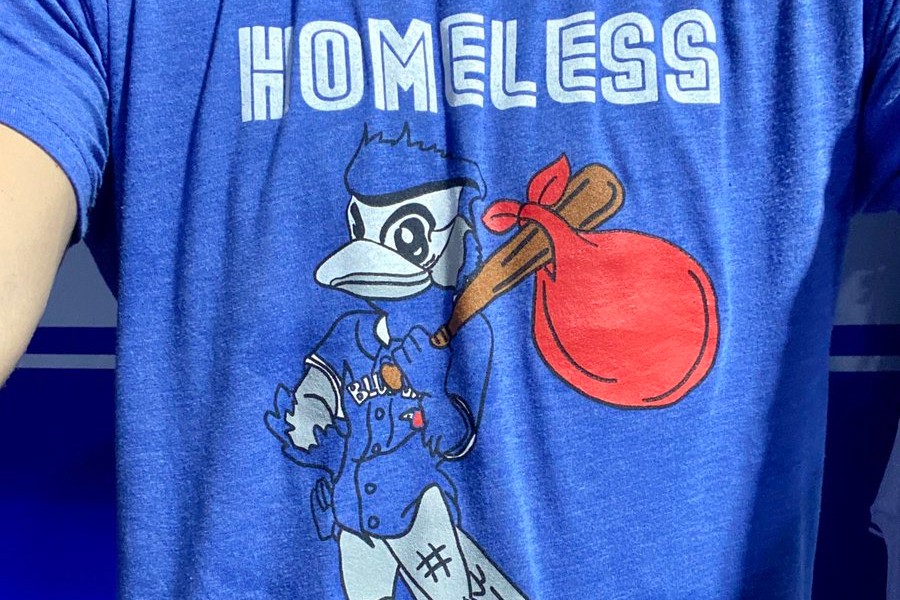 A T-shirt being worn by multiple Toronto Blue Jays players has caused a social media backlash among fans.

The shirt reads “Homeless Jays” alongside the team’s mascot with a missing shoe and bindle hanging from his baseball bat. First baseman and designated hitter Rowdy Tellez wore the shirt in a post-game Zoom media Q&A, while relief pitcher Anthony Bass shared it in a tweet with the hashtag #homelessjays.

The shirt refers to the federal government denying the team permission to play in Canada. Instead, the Blue Jays have been playing home games at Buffalo’s Sahlen Field.

Many on social media called Bass’s tweet stigmatizing and harmful. The city’s growing homelessness problem has been exacerbated during the pandemic as encampments are neglected and renters are evicted.

The team and its charitable organization the Jays Care Foundation have supported initiatives to help Torontonians experiencing homelessness. Earlier this summer, they turned the Blue Jays’ erstwhile home stadium Rogers Centre as a giant food bank in partnership with Food Banks Canada during the height of the pandemic.

A Blue Jays spokesperson told NOW the Homeless Jays shirts are not official merchandise and are not available for sale. The shirts were instead a “player driven” response to the stadium situation. (In a Toronto Star story, writer Rosie DiManno suggests the shirts were a gift from injured Jays closer Ken Giles to his teammates.)

In a statement, the team says the shirts will not be worn again.

“The Blue Jays take accountability for ensuring negative stereotypes are not perpetuated and for supporting marginalized groups in our community,” the statement reads. “The club has addressed the issue of the T-shirts with our players and they will not be worn again.

“The Blue Jays have a strong commitment to lifting up our most vulnerable through Jays Care Foundation, including a longstanding partnership with Toronto Community Housing. We recognize the severity of the homelessness crisis in Toronto and throughout Canada and apologize for a lapse in sensitivity towards this important matter.”