5 new Toronto comedy albums to get you laughing 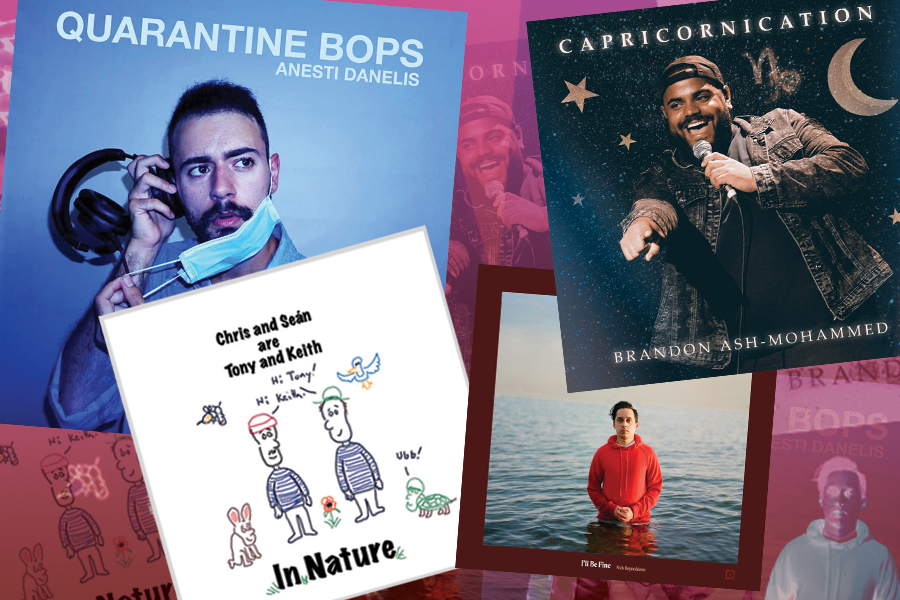 If you can't have fun with friends and family, listen to one of these comedy albums by local performers.

Shortly after the first pandemic lockdown, I reviewed a trio of albums by Toronto comics. Now, nine months and thousands of Canadian deaths later, we need to laugh more than ever. So I decided to catch up on a few more. Some albums were obviously recorded in the before times (the sound of non-socially-distanced audiences will make you nostalgic). But since most performers have had nothing but time on their hands – apart from the occasional virtual show or distanced outdoor gig – many have been able to respond to this new normal, with funny results.

Anesti Danelis’s Quarantine Bops (Independent; Rating: NNNN), as the title suggests, does just that. In the opening track, It’s A Pandemic, he references everything from travel bans and self-isolating to unemployment and toilet paper hoarding. All of this is underscored by an intentionally banal, synthetic beat and the occasional police siren, nicely capturing the surreal normalcy that has defined our lives for much of 2020.

A few of the early songs are a bit too on the nose and repetitive, such as an entire song about the above-mentioned toilet paper, or another about touching one’s face and approaching it like a seduction. And some of the lyrics feel forced, the stresses on vowels a tad awkward.

However, Danelis’s satire hits its mark in the album’s standout track, I’m An Ally (Only Online), which sends up the performative, self-congratulatory responses of many liberal white organizations to Black Lives Matter. Almost as smart and funny is Lovers In Lockdown, about a relationship disintegrating while in quarantine. Because Danelis’s voice is soothing and almost bland, the tracks that work best are the ones where the anger is closest to the surface, providing a great comic contrast.

Chris and Seán Are Tony And Keith In Nature

Neither Chris Locke nor Seán Cullen say “pandemic” or “coronavirus” in their brilliant album Chris and Seán Are Tony and Keith in Nature (Independent, Rating: NNNNN), but they don’t need to. Their silliness and unbridled enthusiasm feel like a reaction to the monotony and bottled up energy of quarantine.

The two play their alter egos Tony and Keith, greeting each other at the top of each scene and then loosely discussing subjects like raisins, the beach or boats. But these topics are never the point of a scene; instead, they let the performers riff on a situation like seasoned jazz musicians.

They can do anything. Go to China to dance; reimagine Angela Lansbury as a Leatherface figure in Bedknobs And Broomsticks; joke about a certain pastry in James Bond movies. The two bring a spirit of comic one-upmanship to their exchanges, but it’s all in good fun.

At a time when we’re all overwhelmed by rules and protocols, it’s liberating to listen to two brilliant minds let loose and go anywhere they choose. I’d tag along wherever they go, especially when they make each other laugh and try to suppress their giggles away from the mic.

Nick Reynoldson’s I’ll Be Fine (Comedy Records, Rating: NNNNN) was released in May, but it already feels like a comedy classic. Reynoldson’s comic persona is so strong and well-defined that it comes through in every track, even though the first two jokes – How I Look and Beige Limbo – address his mixed-race background and physicality, something we obviously can’t get through audio.

Reynoldson is one of those comics who immediately knows how to get the audience on his side. Whether he’s recounting his unique way of avoiding getting beaten up in a club in his old stomping grounds, Scarborough, or detailing his father’s fear of raccoons, his writing is specific, visual and immediate.

His comedy jumps to another level in a joke about how his girlfriend and he adopted a whale. In this bit, and another involving a pet parrot, he layers observations and scenes, resulting in thrilling climaxes.

What makes Reynoldson so endearing is his ability to appear vulnerable, which he draws on for his album closer, a famous bit about trying to protect his girlfriend in an alley. His act is so strong that even though the punchline doesn’t get the laughs it deserves, he gets authentic cheers as he leaves the stage.

The mixed-race queer comic has an electric stage presence that of course doesn’t translate to audio. But you still get a strong sense of his personality through his casual, conversational delivery of jokes about race, sexuality, body size and class.

Off the top, he deals with his name and ancestry – he’s part Trinidadian, part white – then ventures out into discussing what it’s like being queer in a West Indian family. He’s got lots of affection for his blunt Trinidadian mother and grandmother, but he’s equally observant about his hapless white dad.

In fact, one of the album’s funniest jokes comes at the end, when he recounts sitting down with his dad and discussing his education, career aspirations and back-up plans. In a few minutes, Ash-Mohammed finds a novel way to skewer stereotypes about race and class. The joke is enhanced by a sudden, eleventh-hour burst of energy.

While Ash-Mohammed is fierce and breezily confident – which help sell his raunchy sex jokes – I’d love to see him show a bit more emotional range. But he’s still young. I can’t wait to see how he evolves.

Todd Van Allen is one of the most likeable, reliable comics and podcasters in the city. It’s been two years since his album Really?, and Butterflies (CapTee Productions, Rating: NNNN) marks a big step forward.

“When you look like this you do not get to do ethnic material,” he says at the outset, indirectly commenting on the fact that straight white male comics have dominated the scene for too long. When he imagines someone asking what his own ancestry is, he comes up with a brilliant image that captures his brand of whiteness.

Much of the fun of this album comes from the track titles, which take on various “isms”: there’s one called Homophobia, while others tackle Sexism, Ageism and Racism. This is a clever marketing ploy, because the way Van Allen gets to these subjects is pretty ingenious. Just study the circuitous way he gets to the punchline in his joke about homophobia set in Alberta.

The album’s standout track explores how expressing anger has changed with the advent of cell phones. Van Allen’s leisurely set-up draws on the little sound that iPhones make when you send and receive texts. The climax to the joke – all audible, and hence perfect for listening to – harkens back to the golden era of comedy.

And his closing joke is incredibly ambitious, involving learning Italian to please his wife’s family, visiting Italy and exploring the possibility of his wife getting pregnant with his 50-year-old sperm. It’s a lot to juggle, but Van Allen – an impeccable storyteller – never drops a ball.