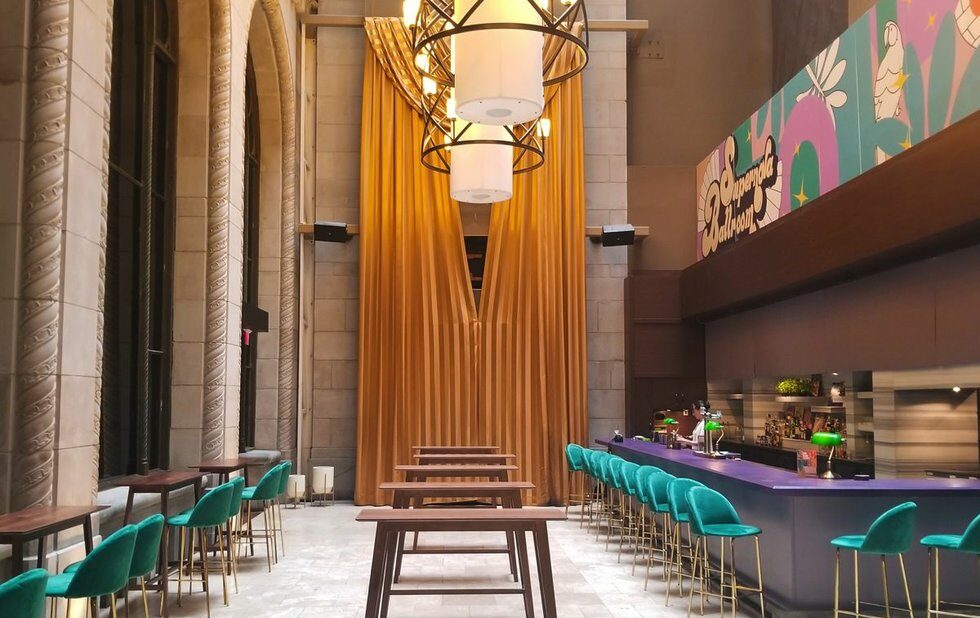 Supernova Ballroom (330 Bay, at Adelaide, 416-710-2764, supernovaballroom.com) is the latest project from the minds behind Trash Tiki, the global cocktail pop-up devoted to lessening the environmental impact of bars.

Modestly hidden behind the concierge desk of 330 Bay Street in the financial district, the bar’s colourful, retro disco lounge-inspired design combats the intimidating nature of the beaux arts architecture of the 1926 building.

It’s still early days yet, with more refurnishing to be done, along with the addition of art by Kisira Hill. But with its purple bar, teal seats and harsh concrete arches, the space has effectively been transformed into a cathedral of funk. 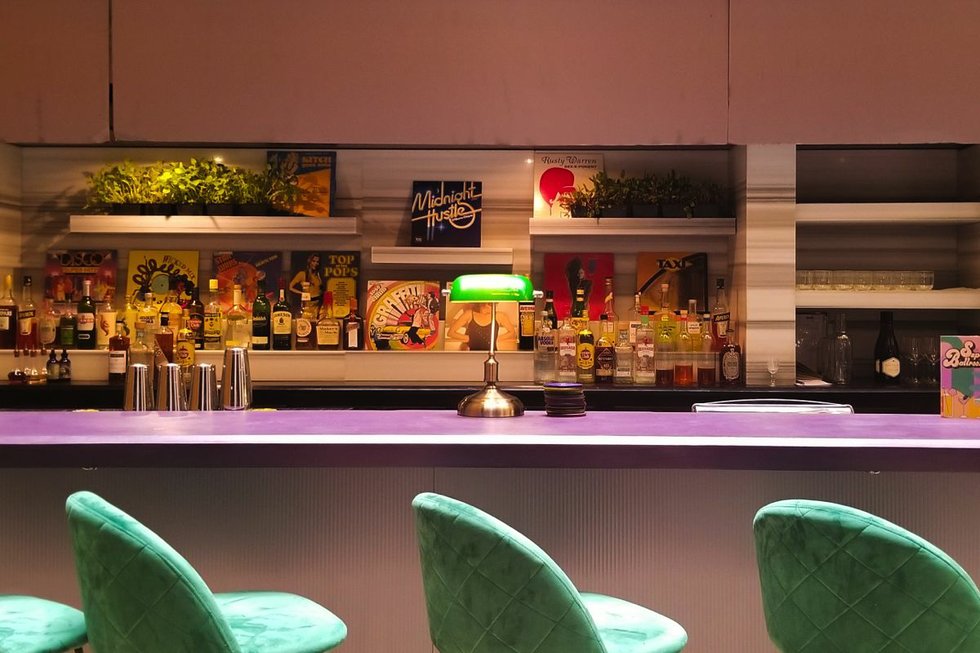 Ramage hails from Vancouver, where she spent a great deal of time bartending at the Canadian fine-dining institution the Oakwood, eventually becoming the restaurant’s wine curator and general manager. In 2015, she moved to London, England, and immediately started at the prestigious (now-closed) Dandelyan at the Mondrian Hotel, which scored the title of Best Bar in the World at the 2018 World’s 50 Best Bars awards.

Dandelyan’s ethos of well-researched and inventive cocktails resonated with Ramage, and under the direction of the renowned bartender Ryan Chetiyawardana (aka Mr. Lyan), she eventually climbed the ranks to become head bartender. 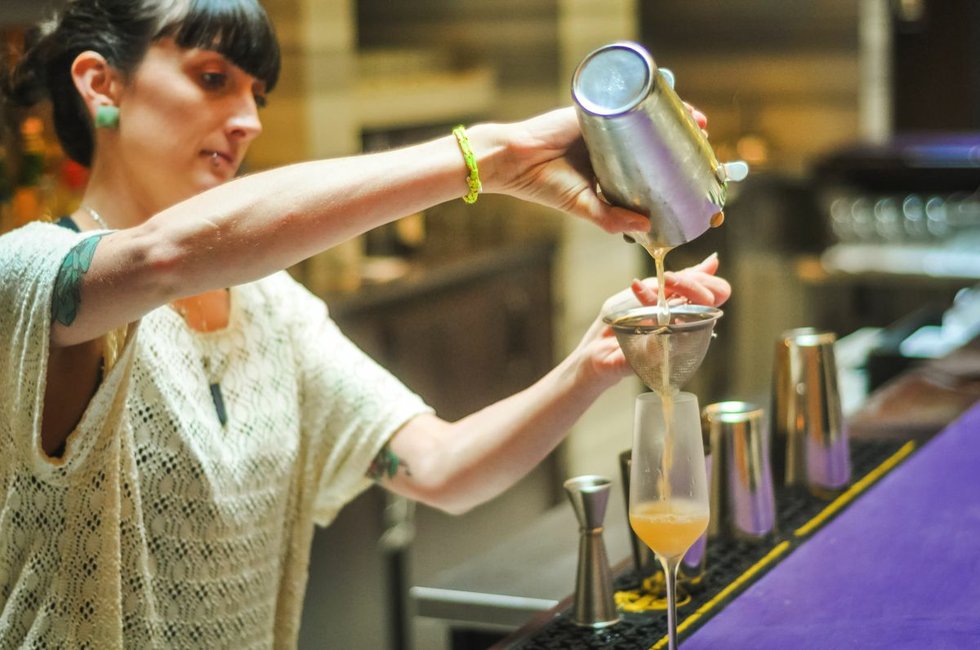 Meanwhile, the Australian-born Griffiths moved to Edinburgh to run Bramble, a bar that reached number 10 in the World’s 50 Best Bars during his tenure, before meeting Chetiyawardana and becoming a creative co-partner in Mr. Lyan Ltd.

So it was through Dandelyan that Ramage and Griffiths met, and it didn’t take long for them to realize that they shared a passion for exploring creative and new ways to approach drinks.

In 2017, the pair left the comfort of London and formed Trash Tiki, the anti-waste punk pop-up that travelled the world, turning items that would normally go in the garbage into kick-ass ingredients for unique drinks. Stale almond croissants became orgeat syrup. Leftover watermelon rinds from a lunchtime snack became a cordial for their Poiring Blood Cocktail.

And, best of all, Ramage and Griffiths were happy to share their information, putting the recipes for most of their unique concoctions online and giving open seminars for bartenders called Trash Talk. As long as they got people to #drinklikeyougiveafuck, they were happy. 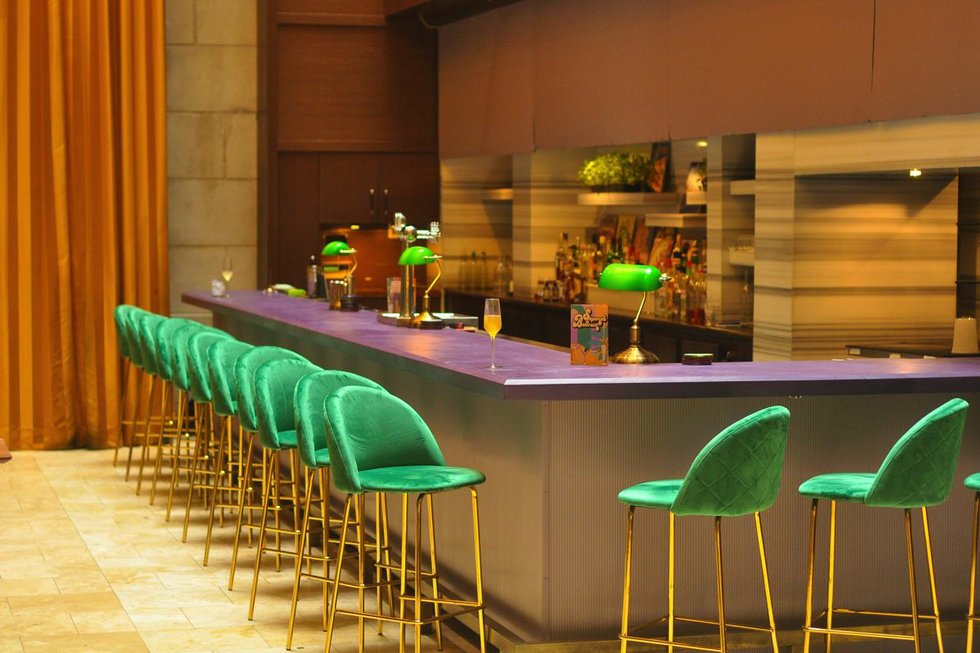 Now the pair have landed in Toronto to plant their roots. “We really want to reconnect Toronto with what they’re drinking and what’s available locally,” Ramage says.

“Yeah, New York classics are cool and London classics are amazing, and they teach you what proper drinks should taste like, but we want to be a little more experimental and showcase what Toronto has to offer.”

The duo bring their shared experience from Dandelyan and Trash Tiki to Supernova Ballroom by retaining the no-waste ethos while putting locally produced ingredients at the forefront.

Their lemon oleo, for instance, is produced using lemon rinds from their own lemons and, when more volume is needed, from local juice manufacturer Anti Vice. “They have a lot and it’s just sitting there, so it really helps us out,” Ramage says.

Additionally, to be more mindful of the environment, Ramage and Griffiths have chosen to highlight distilleries that strive to reduce their carbon footprint, like Fords Gin and Gooderham & Worts Whisky.

The drinks themselves are creative, contemporary takes on classic fizzy drinks that pair as well with the space as with the food menu, which includes beet-pink devilled eggs, seasonal salad and classic English beans on toast.

Here’s a closer look at the drinks: 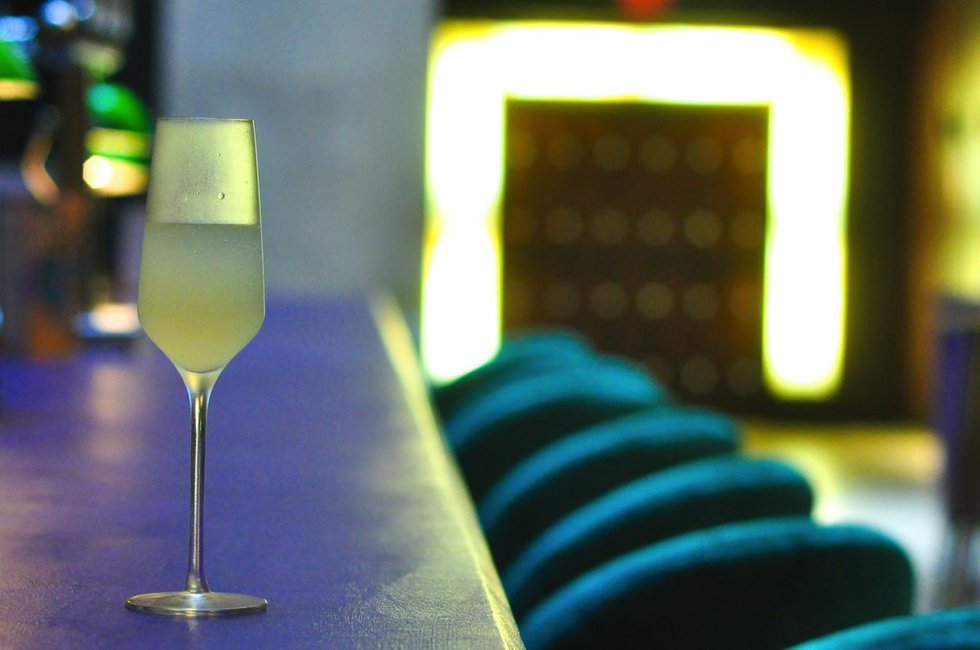 The Supernova Bellini is the signature drink. A peach wine made from organic Niagara peaches is combined with clarified white miso and Prosecco to create a drink that is nothing short of a juicy, fizzy treat, featuring only the slightest hint of umami. 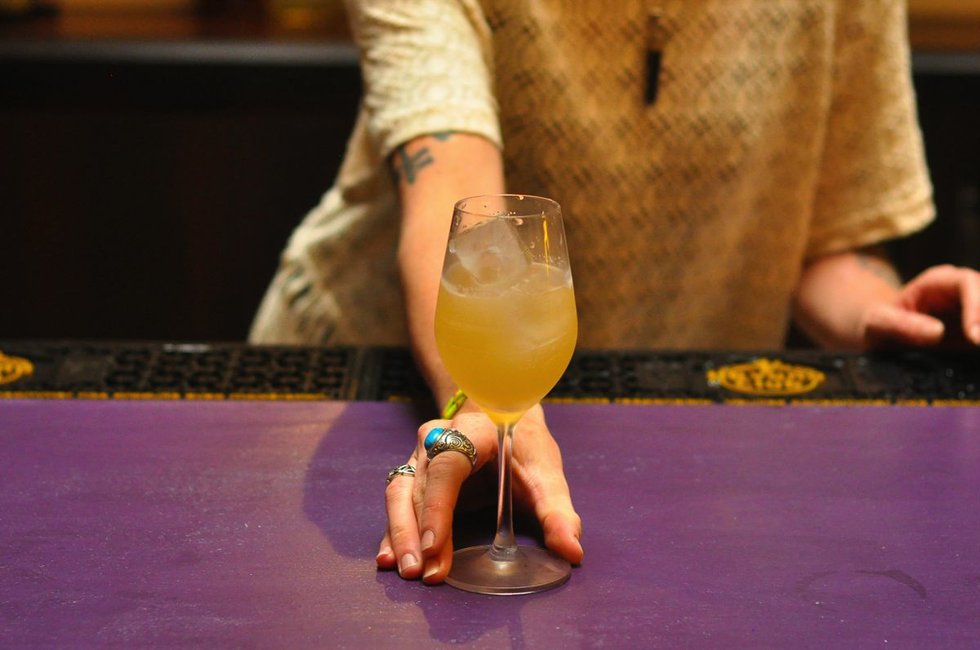 The Four to the Flor features Lost Orchard 2017 harvest cider from the Meaford-based Windswept Orchard Cider, combined it with fino, kelp, sherry, honey and whisky from Gooderham & Worts. The result is a cocktail that might seem big and boozy, but manages to be light and comforting, with all of the ingredients bouncing off one another perfectly – while still showcasing the quality of the cider. 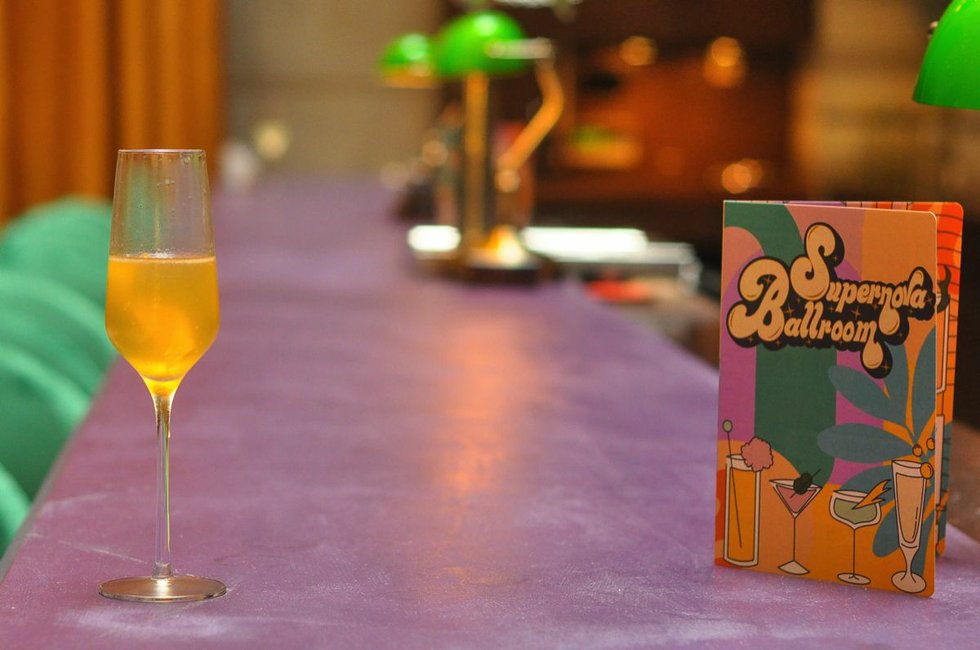 Among Supernova Ballroom’s selection of French 75s, Le Classique is the one to start off with, featuring Martell cognac, house-made lemon oleo, lemon juice and Mumm champagne.