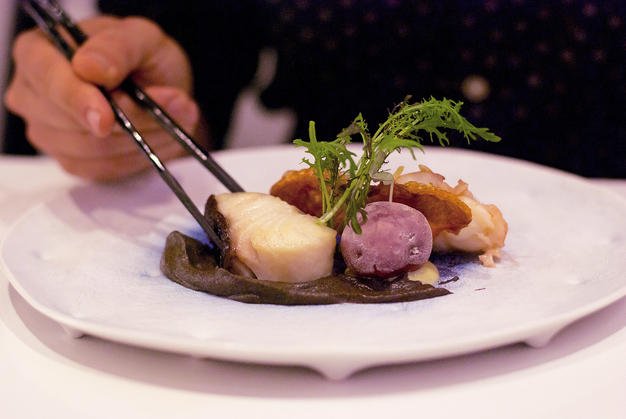 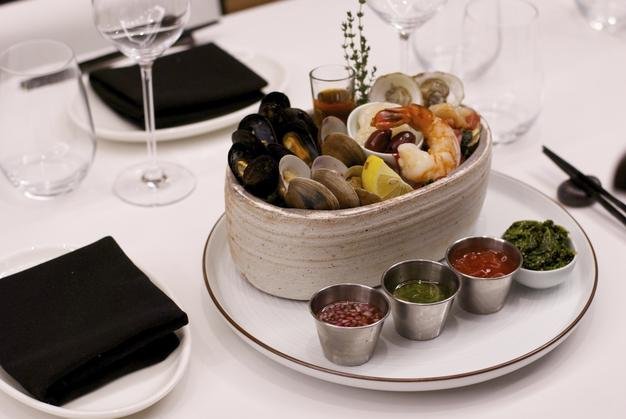 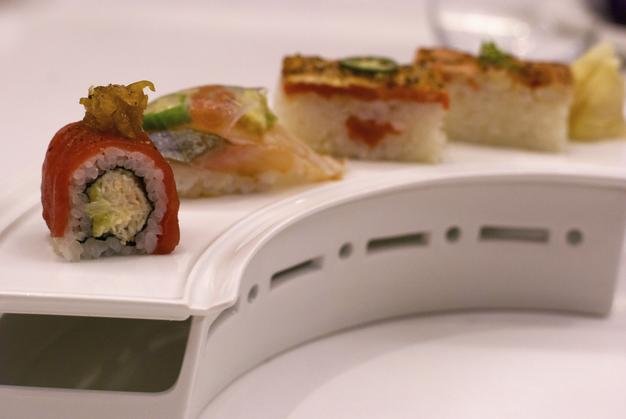 What’s a gleaming new office tower without a place to make liberal use of those expense accounts? The brand-new RBC WaterPark Place (steps from the water at Bay) might be the ideal fit for Miku, the first venture east of the Rockies from Aburi Restaurants, which operates three highly regarded sushi restaurants in Vancouver.

The dynasty’s signature is “aburi-style” sushi, invented a century ago in Japan. “Basically it’s flame-torched sushi,” says executive chef Kazuya Matsuoka. “Why would we flame-torch sushi? There are so many sushi restaurants in general now. We thought about what we could do to innovate.” Additionally, instead of the traditional wasabi and soy sauce, Matsuoka infuses European-style sauces into his signature nigiri or pressed oshi sushi.

There are plenty of à la carte options, from rolls and grilled entrees to exquisitely arranged sashimi platters, with a vast selection of sake to match. For the full experience, spring for one of the three kaiseki menus. The Japanese culinary art form, pioneered by monks, revolves around a careful balance between tastes, textures and even colours, with dishes and ingredients always appearing in a set order.

A recent example, served at a media event, opens with a series of amuse-bouches arriving tableside in a pink ceramic bento-style box: a single pure-tasting oyster under a light kabosu mignonette, nigiri reimagined as self-contained orbs of tuna belly swirled around rice, a sweet whole shrimp with a creamy mouth feel unlike any other I’ve ever had.

Next, a moon-like plate arrives bearing smoky, buttery miso-baked sablefish and lobster tail zinged up with a herbaceous chimichurri, flanked with a chicken-skin crisp and smears of earthy eggplant purée and aioli. Triple-A beef tenderloin, served in a mini slab, is fine, but the surrounding sauces and bites, including a roasted stalk of Welsh onion, a rich (and very French) puddle of shallot purée and a spice-pickled baby turnip, just about steal the show.

We return to sashimi for the penultimate course – this appears to deviate from kaiseki tradition, but I’m not complaining. One bite into a blow-torched bar of pressed-rice sushi, and the salmon just melts away, an effect helped along by a slip of “secret sauce” layered just under the fish. The quality of the seafood, unsurprisingly, is outstanding. (The restaurant uses local ingredients and OceanWise seafood whenever possible.)

Finally, dessert: a six-layered green tea opera that tastes like a Ferrero Rocher with a twist of matcha. It takes three days to make, and about three minutes to gleefully demolish. 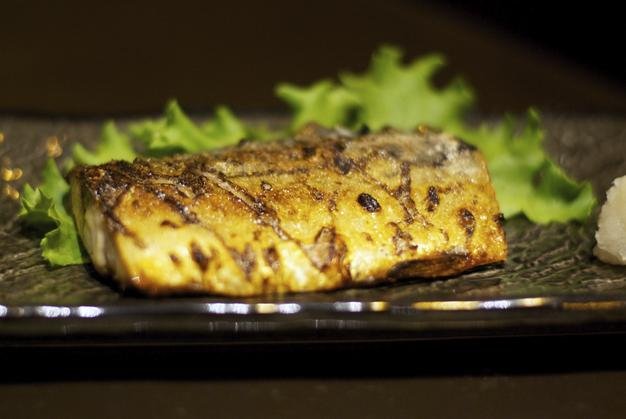 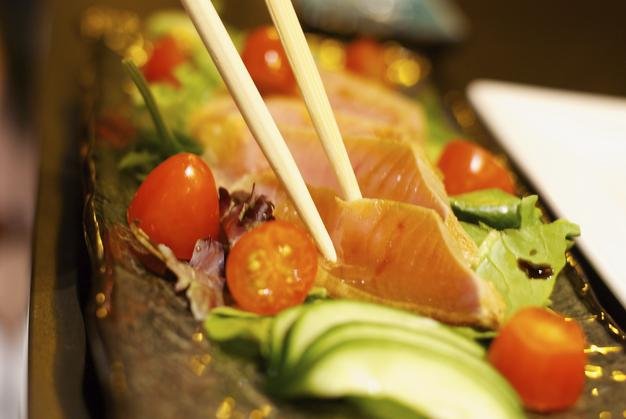 Early this year, Yutaka took over the Garden restaurant at Dundas and Chestnut, replacing greasy all-night Chinese with a menu reflecting the combined culinary expertise of three veteran Japanese chefs. Osamu Fukushige (the Drake) and Michi Tanaka (Edo), former culinary-school classmates three decades ago, and Bill Hu (Masa) put their heads together for the new spot.

Tanaka oversees the prepared items from the back kitchen, while up front, Fukushige crafts the sushi and Hu mans the robata charcoal grill (a feature only seen at a few Toronto restaurants, most notably at the now shuttered Shibui Robata Bar).

Along with a sizable menu that gives each of the three chefs plenty to do, we’re presented upon arrival at the dark-walled, streamlined spot with a menu of seasonal specials. The scallops, our server informs us, were alive until yesterday. Since we’ve arrived late in the day, they’re almost out, but our order’s shored up with the regular scallops brought in from the West Coast. They’re fresh and light, but the former – which come all the way from Japan – are impossibly buttery and sweet, with none of the usual tendony texture.

The plating here is straight-up and spare compared to the edible sculpture at Miku, but sea bream and striped jack sashimi are still striking, silver skin shining on both like foil backing, and the fresh wasabi, jellylike with bits of stem inside, brilliantly sets off the smokiness of the fish.

Off the robata menu, we order grilled squid, and can choose between sea salt or teriyaki sauce versions we pick the latter, which unfortunately makes for a rather blah squid.

We also grab a hamachi neck, a curving slab of fish that shows up unembellished on the plate. “Know what this tastes like?” my dining partner asks, after making a couple ecstatic noises. “When you catch a fish and throw it over the campfire.” It’s fresh and soft on the inside, with a crisped exterior skin, and makes such an impression we decide to go nuts and spring for the mackerel next. It’s equally perfect, and it’s $6. Rounding out the menu are $12 bowls of daily ramen and sushi appetizer combos beginning at $10. Unlike the elaborate tasting menus found at some other Japanese spots making waves in Toronto, Yutaka can be an everyday indulgence. 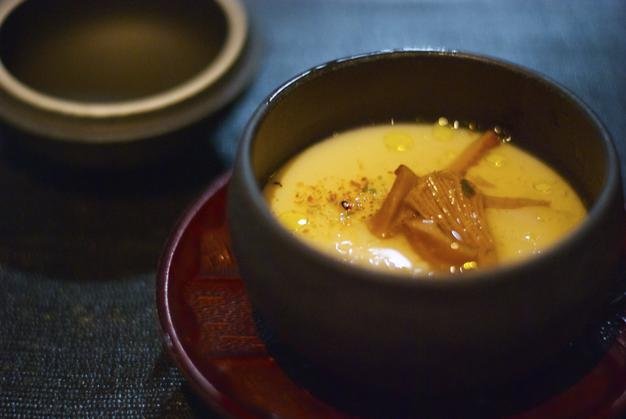 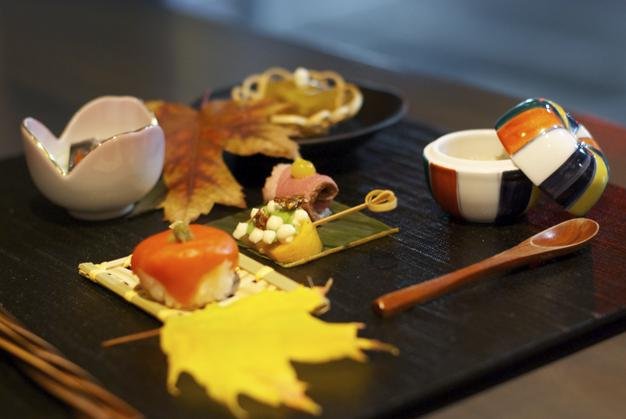 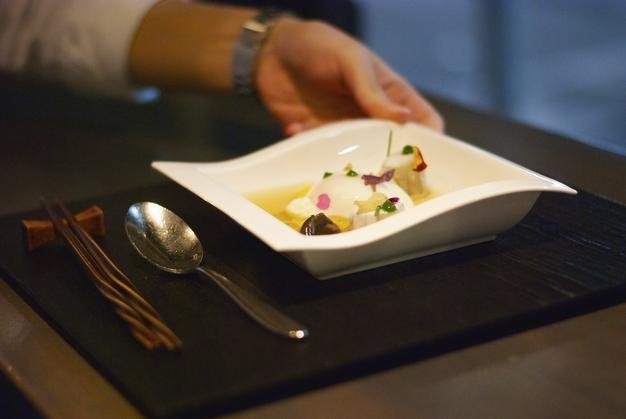 On a sleepy western stretch of Harbord, Yunaghi caused a major stir upon opening last year. At the cozy, romantically lit restaurant, chef Tetsuya Shimizu, previously the sous-chef at short-lived critical darling Yours Truly, pours his 12 years of kaiseki training (plus a bag of French culinary tricks) into nightly courses of small plates. While playful, his dishes hew fairly strictly to kaiseki tradition.

On one night, the customary plate of miniature appetizers, looking in the dim lighting like a colourful scale-model carnival, includes a little pot of rich butternut squash tofu and a clean-flavoured salmon nigiri.

The soup course is a tiny bowl of ramen in a richly-flavoured chicken broth, topped with a slice of remarkably lean pork chashu and a noodle crisped up to resemble two pine needles.

A bowl of chawanmushi, a Japanese savoury custard, is uncapped tableside, releasing the aroma of truffle oil dotted on top. Stirring it reveals melting shards of Grana Padano and gives it a soul-warming egg-drop-soup-like texture.

For the main, we opt for fish instead of chicken – meaty, if portion-controlled, slabs of Spanish mackerel – but the meal-ending rice course (traditionally meant to ensure the diner is sated at the end of the kaiseki meal) almost upstages it. Ginger-scented sticky rice is topped with pickled vegetables carved into leaf shapes and marinated mushrooms next time the mercury drops below -20°C I’ll be begging for an à la carte bowl. The resto does offer individual dishes on request, but if you can dig up $77 from between the sofa cushions for the seven-dish menu (or $99 for nine courses), the journey is more than worth taking.