Whether you want elaborate or low-key, these local eateries have dreamed up dine-in delights. Plus: bonus ideas for all the lovers 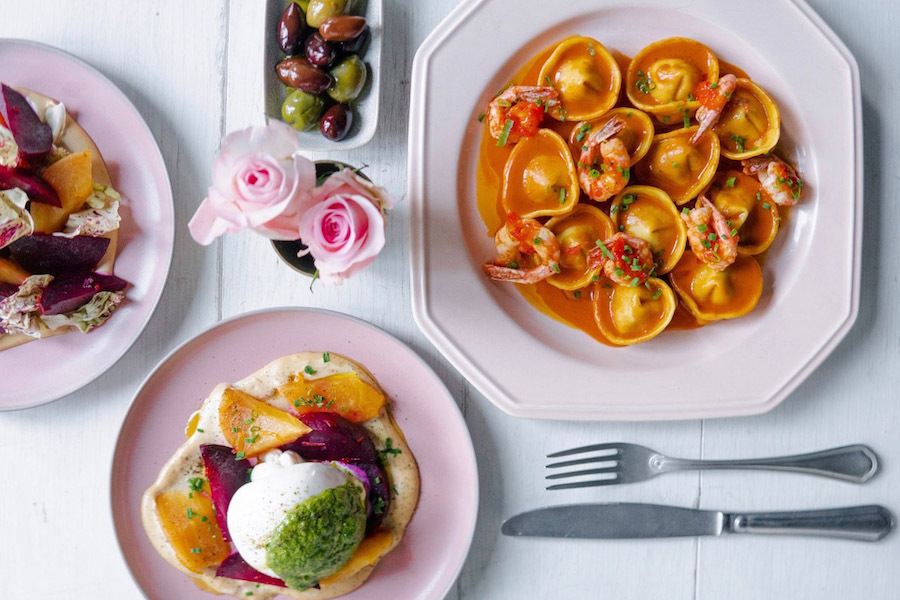 The stakes are lower for Valentine’s Day dinner this year. There’s no stressing over securing a reservation at a buzzy Toronto restaurant or planning an unforgettable night.

As long as you spend it with someone you love, your Valentine’s Day is a success (which is probably how it should be treated every year, anyway).

Although we can’t dine in, many Toronto restaurants have dreamed up elaborate dinners for the lovers amongst us to indulge and enjoy.

From upscale and fancy to laid-back and relaxed, whether you’re craving saucy ribs or a refined five-course meal, there’s something for you.

Here are 15 special Valentine’s Day dinners from Toronto restaurants (plus a few bonus ideas for a different kind of celebration).

Aloette’s Valentine’s Day dinner for two is an adventure through a range of cuisines. Highlights include king crab with yuzu kosho and wakame seaweed, scallop crudo with green apple, hibiscus and Thai basil, cavatelli pasta with black truffle and chives and braised beef cheek.

This vegan restaurant is doing a Valentine’s Week menu starting February 11, but the focus is a box of canapés – a mini-tasting menu with 12 items – available over the weekend. The rest of the menu includes focaccia with herbs, Valentine’s salad with watermelon radish and tofu feta, oyster mushroom paella and two desserts, chocolate cookie pie à la mode and mango cashew custard.

The new kid on the Ossington block has two Valentine’s Day meal kits available. The Middle Eastern spot’s offerings each come with four mezzes, three mains and a dessert. All the classics, pita with za’atar, house-made labneh, hummus, mejadra rice and musakhan are on the list. They’re doing add-on cocktail kits as well, including one made with Azhar’s own rose and saffron liquor, tangerine cordial, rose water and ginger beer.

This new Filipino restaurant is offering a Valentine’s dinner with options. Choose your own shareable starters, from kusshi oysters, lumpia, shishito peppers and more and pork belly adobo, braised brisket and pappardelle bolognese as entrées. For dessert they partnered with Shannon Nocos of Make Kwento for a collection of petit fours, ube macapuno cake, passionfruit marzipan cake, coconut and strawberry macarons.

Constantine’s finish-at-home Valentine’s kit comes with all the fixings for a four-course meal plus a 30-to-45-minute live cooking class with Chef Craig Harding. He’ll teach you to make the tortellini in brodo that goes with the rest of the meal, including wood-fired pita with beetroot and smoked trout, Fogo Island cod en croûte with mushroom sauce and maple and cranberry eclairs.

Donna’s Valentine’s Day “Heat-and-Eat” includes sea bream crudo, beef carpaccio, a beet, red cabbage and watercress salad, baked monkfish with clams and chocolate cake to top it off. For the couples with children, there’s a VIP kids special add-on so the little ones can join the festivities. The meal also comes with a QR code that links to an exclusive love day playlist to get the mood just right.

If you’re looking for a more relaxed V-day dinner, Liberty Commons has you covered. They have a range of Valentine’s weekend specials starting on February 12. Choose from baked fondue and charcuterie for two, a BBQ platter with 10-hour smoked cacao and a pound of coffee rubbed brisket and chili chocolate pork ribs, crab cakes and a bourbon “beer-amisu.” Or just order everything and feast.

Manita is offering free delivery for their Valentine’s Day package for anyone living in downtown Toronto. The dinner for two includes a selection of mezzes, chicory and wild arugula salad, Atlantic lobster spaghetti and a flourless chocolate tart and a bottle of prosecco. You’ll also get fresh cut flowers, so don’t worry about running out to the florist.

If you love a theme, Marben’s 80s Valentine’s Night In might be the way to go. The takeaway dinner is available between February 12-14 and comes with movie snacks and the link to a themed playlist. Fogo Island snow crab pizza rolls, a shake-in-the-bag caesar salad, twice baked potatoes with ranch and chicken breast roulade with truffled gouda and smoked bacon make up the menu. The 16 Candles layer cake brings the theme together.

Tala recently announced the landlord sold their building to condo developers, but they’re still operating until March 22. The Valentine’s Day Kamayan kits are a collab with other local businesses Thyme Studio, Soft Dough Co and Adobar. They designed it so you can choose between a kamayan kit for one, two or four because “who knows how everyone’s celebrating this year?” Their kamayan spreads are mouthwatering spectacles of Filipino cuisine. The desserts are handled by Adobar and Soft Dough Co and florals are from Thyme.

The Parlour’s SWIPE RIGHT package comes with a pizza of your choice, a salad and a special Valentine’s Day dessert. The pièce de résistance is the DIY cocktail kit, which comes with a mini bottle of Grey Goose, St Germain, fresh lemons, tonic and Grey Goose branded glasses.

For a nice, family-style Italian Valentine’s dinner, Parcheggio’s over-the-top menu is the way to go. It starts with focaccia, marinated beets and nonna’s meatballs then moves on to tubetti e fagioli as the pasta course, then slow-roasted smoked porchetta and grilled squid with lemony potatoes. And then chocolate fondue for two if you can handle it.

Ufficio has two three-course Valentine’s dinners, one pescatarian and one vegan. Both are designed to share. The pescatarian meal starts with a roasted beet burrata with arugula pesto and candied orange vinaigrette and a choice of two pastas, either leek and ricotta tortelli with spicy prawn bisque and sautéed shrimp or potato gnocchi with rapini pesto and crispy eggplant. The vegan dishes are a beet salad with vegan mozzarella crema, vegan wild mushroom risotto, rapini with maple syrup and chili and vegan arancini balls. The dessert for both is tiramisu, one being a vegan version.

For the love birds who want to do something more hands-on or who have dinner covered and are more concerned about drinks:

For a Valentine’s Day breakfast in bed, the Toronto coffee chain is selling a bundle that can be delivered straight to your door. You get a Balzac’s coffee blend, protein pancake mix from Flourish Pancakes and Canadian maple syrup.

Take a virtual Valentine’s Spanish cooking class with your significant other taught by Lois Britton. On the menu: red wine sangria, garlic mushroom tapas, tortilla Española and Spanish flan. While you are enjoying your meal following the class, live Latin music will be played by John Ferreira.

It’s a match made in heaven, another wine shop has partnered with a florist! Bouquets from Hunt and Gather are paired with three different bottles, either Paradise’s in-house Riesling, Cabernet Franc or Pet-Nat.

This sushi–making 101 class will teach you to make four kinds of sushi, including a heart-shaped “couple’s roll.” You also get a bottle of sake, a smash cake and a floral arrangement in a glass vase.