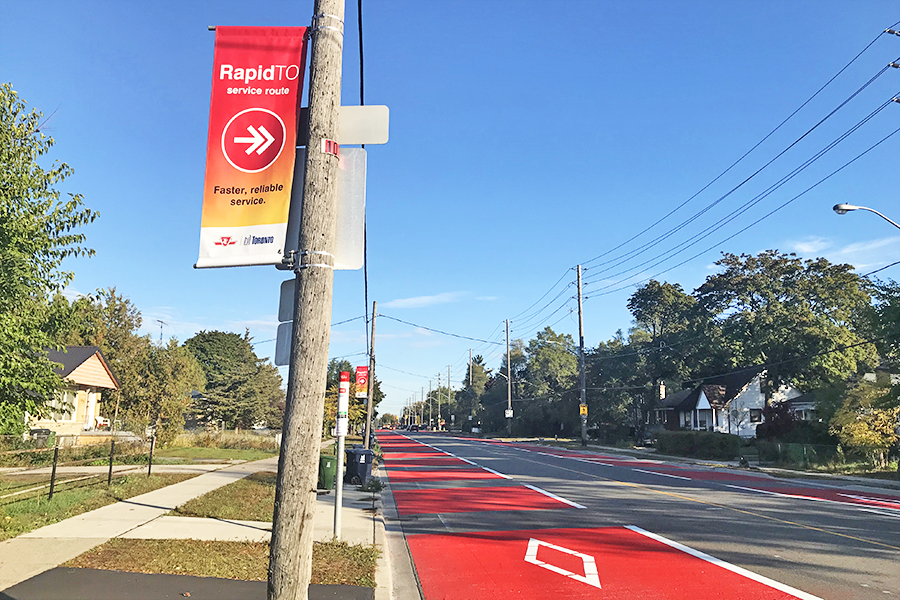 The sheer volume of commuters choosing to take bus transit has been steady throughout the pandemic. It is cost efficient, reduces carbon emissions and even lessens traffic congestion.

Public transit can also help residents avoid the stress that comes along with driving (and finding parking) on a daily basis.

In order to support its residents in all of their commuting endeavors, the City of Toronto and the Toronto Transit Commission (TTC) are working together to implement the RapidTO priority bus lane program.

Ultimately, the plan will allow residents to access their place of work, along with important community and health-care services, without having to use a passenger vehicle.

“RapidTO priority bus lanes are designed to help keep bus schedules on time and reliable for passengers who ride the corridors,” says Matt Davis, manager of Transportation Capital Projects and Programs for the City of Toronto. “They also encourage transit equity for transit riders and are expected to serve several identified Neighbourhood Improvement Areas in Toronto.”

“The new red painted lanes are accompanied by a public education campaign to help raise awareness of this important new initiative,” says Davis. “The educational campaign will also help drivers, cyclists and pedestrians understand how to interact and maneuver with the lanes.”

Grasping the correct use of the red lanes is essential. Failure to do so will result in a fine of $110 and three demerit points, which nobody needs with the expensive holiday season quickly approaching.

These new rapid lanes are arriving to the city at a rather opportune time as many Torontonians are facing job insecurity due to COVID-19. Residents are now able to count on reliable and quick public transit instead of using their costly vehicles or rideshare services to get around.

“Surface transit routes, especially buses, have continued to play an important role in getting people moving – even during the pandemic,” says Davis. “They are a critical part of our city’s growing transportation network.”

To learn more about the RapidTO program or for information on how to correctly use the lanes, visit toronto.ca/rapidto.