In Toronto, many small businesses can’t afford to wait for government relief

After building up a successful Leslieville yoga studio over the past six years, Rachelle Wintzen never imagined that she would be back where she started – running Chi Junky on her own.

But like so many small businesses in Toronto and around the world that have been forced to let staff go or shutter altogether due to COVID-19, Wintzen is not alone. Fortunately, she’s been able to teach 10 classes a week virtually on Zoom at reduced rates and negotiate a temporary rent deferral with her landlord to save her from closing the studio.

Every day she wonders how much longer she can keep her business going.

“I’m back to a one-woman show,” said Wintzen, who had to let go all of the 25 salaried and contracted employees. “When we closed, I was seeing an average of 700 people a week and we had 40 classes a week we were in the process of adding more because we were doing so well. Now with this I have seen a 90 per cent drop because I can’t afford to hire teachers right now.”

But other entrepreneurs like Ryan Lucier, who owns and operates the east-end bar Lloyd’s on Queen, haven’t been so lucky. While some small-business owners in the hospitality industry have been able to transition to take out and delivery, Lucier said his bar focuses on drinks and has limited food offerings.

“Staying open just to sell grilled cheese sandwiches didn’t make a lot of sense,” he said. “We would end up losing less money by just closing our doors.” Lucier let all five of his staffers go as soon as non-essential businesses were ordered shut by the provincial government last month.

For some small businesses, there is hope. The government recently approved the Canada Emergency Wage Subsidy (CEWS), which provides a 75 per cent wage subsidy to eligible employers for up to 12 weeks, retroactive to March 15. Companies eligible for the interest-free loan include private corporations, non‑profit organizations and registered charities.

After initially facing criticism, Canada’s finance department “relaxed” the criteria, which now requires business owners to prove a 15 per cent instead of 30 per cent revenue dip (in March and then 30 per cent for April and May, respectively) and allows them to opt for a monthly or a yearly comparison (which was the only option previously). So instead of having to prove a revenue drop in March 2020 compared with 2019, the revised rules also allow the option to compare March 2020 to an average of January and February 2020.

A yearly comparison would have been difficult for newer businesses (five years and under) as they are less likely to have recorded stable revenue over an extended period of time, as Shira Kalfa, partner and founder of business and tax law firm Kalfa Law, explains.

“The revised criteria recognizes that some businesses are growing and had a difficult 2019. That’s great and a huge leap forward,” she said.

However, Kalfa said many businesses use the accrual versus cash accounting method, which means they work a few months back and won’t know whether they’ve suffered a drop until a few more months out, meaning they won’t be able to apply for the loan just yet because they can’t prove a revenue loss. According to the Department of Finance website, eligibility periods are: March 15 to April 11 (period one) April 12 to May 9 (period two) and May 10 to June 6 (period three).

“With the accrual method, a business’s revenue this month is for work done three months ago so they’re going to receive a revenue hit in June, July and August. The current government framework doesn’t account for that.”

Chris Ho, VP of client experience for HR at software company Humi, adds that the inability to sense real-time revenue leaves many businesses unable to plan for the coming month and unsure as to whether or not to continue to keep on their employees.

On top of that, Ho said the tech company’s clients are unhappy with the revenue eligibility criteria.

“It’s not because they think it’s unfair but because they’re not sure how to act or how to make decisions when they’re unsure if they will qualify or not,” he explains.

Wintzen is going to try to take advantage of the 75 per cent wage subsidy if she can generate enough revenue to pay herself a modest salary. Companies can claim the wage subsidy for any Canadian employees, including new staff members, but won’t be able to make claims for an employee that was laid off and didn’t receive a salary for 14 or more consecutive days in any given period.

But it’s not going to be until mid-May that businesses can apply for the wage subsidy, during which time another month’s worth of rent, insurance, property taxes and any other operating expenses are due.

For Lucier, it doesn’t make sense to apply.

“If there was an opportunity for us to take advantage of the wage subsidy and stay open, we would do it,” he said. “But the money just isn’t there without customers in the bar drinking and spending time there.” 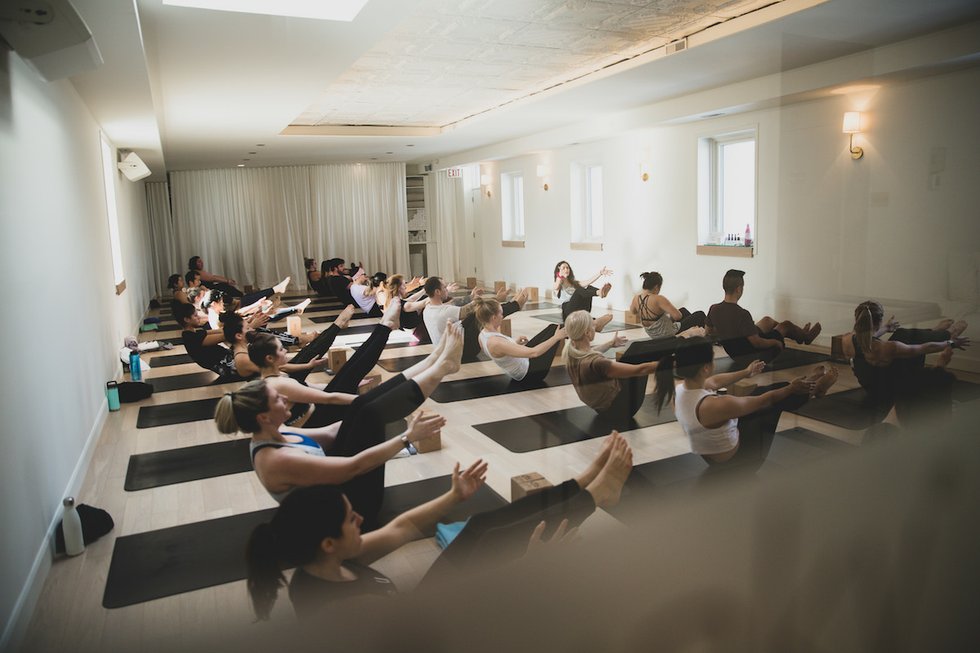 Chi Junky owner Rachelle Wintzen worries about having to pay loans back – especially since it won’t be “business as usual” when her yoga studio reopens.

In addition to the $73 billion the government has invested in the subsidy, employers have other options: deferring GST/HST payments, income taxes and customs duty payments taking advantage of $40 billion worth of guaranteed loans through BDC/EDC to help cover operational costs using the EI work-sharing program to help keep people on payroll and applying for interest-free loans (up to $40,000) through the Canada Emergency Business Account (CEBA).

In his daily address to Canadians on April 16, Prime Minister Justin Trudeau announced the government is expanding the CEBA loan, which has been available for small businesses and not-for-profits to apply via banks since early April. To date, the government said 195,000 loans have been approved and over $7.5 billion in credit paid out. The new rules will allow for those who have spent between $20,000 and $1.5 million in total payroll in 2019 (previously between $50,000 and $1 million) based on tax records to qualify for the loan.

Even with all this government assistance, figuring out the best path forward when the future’s uncertain is beyond difficult.

“We’re in this weird place,” Wintzen said. “Do I apply for EI, wait for the emergency fund or apply for the wage subsidy? We’re in limbo.”

Lucier is encouraged by the government opening up the loan criteria but feels some small businesses are still left out. “It’s good to see more businesses becoming eligible for loans,” he said. “Not every small business out there has a large or sizable payout for their employees, especially if they operate a business by themselves.”

Trudeau also announced the Canada Emergency Commercial Rent Assistance (CECRA) program, which will provide loans to commercial property owners who offer rent reductions or forgo the rent of small businesses retroactively for April, May and June. (At the time of writing, April 16 is the day that landlords can legally evict tenants if they failed to pay April 1 rent.) But the prime minister has yet to offer details, except to say the federal government will work with provinces and territories as commercial rent falls under their jurisdiction.

Lucier said the government’s announcement around commercial rent is a step in the right direction. “We’re looking forward to the government releasing more details,” he said. “Hopefully it’s something that will work for tenants and their landlords.”

NOW reached out to the Department of Finance for comment, but a spokesperson couldn’t provide further details.

The Ontario government’s temporary suspension of residential evictions doesn’t apply to commercial tenants. The Canadian and provincial governments have been slower to act compared with other G7 nations such as the UK where commercial tenants unable to pay rent because of the coronavirus will be protected from eviction.

In Toronto, many businesses can’t afford to wait for rent relief with the average small business paying $10,000 a month in rent or more, according to the Canadian Federation of Independent Business.

“Today’s announcement by the federal government of commercial rent support is a major victory for small businesses and will help many hold on through this crisis,” CFIB spokesperson Milena Stanoeva said in a statement to NOW. “We are asking the provinces to step up with hardship grants as well, as many businesses simply can’t take on more debt.”

The CFIB is inviting small business owners to join the 3,000 business owners who have already signed its petition to governments. Owners can also call CFIB’s helpline to speak with an expert.

There’s also a new website called savesmallbusiness.ca that was created by Discourse founder and CEO Erin Millar and her family and friends that run small businesses. Since late March, the site has gathered 34,300 signatures from small businesses to pressure the government to share some of the debt being placed on small businesses.

For now, it’s up to owners to fend for themselves and negotiate with their creditors and landlords. Dale Barrett, partner, owner and founder of tax law firm Barrett Tax Law, said a lot of creditors are open to allowing interest payments only on rent. Business owners can also see a bankruptcy trustee to help hold creditors off. Or, like Barrett’s had to do with his own business, @lawyersandlattes, come up with COVID-safe ways of operating. “It may just come down to becoming creative and finding new ways to stay in business.”

Barrett’s firm is behind midtown “legal cafe,” which was offering accessible legal advice over a cuppa joe prior to being forced to close last month. During COVID-19, he’s had to come up with new ways to offer his services, such as “COVID-safe will signing” over Instagram.

Even if Wintzen or Lucier could qualify for government assistance, they, like many small businesses, are worried about going into debt. While not having to pay rent this month or next might help her stave off closing shop today, Wintzen said she worries about having to pay it all back tomorrow – especially given that it won’t be “business as usual” when she opens her doors again. For now, Lucier’s evaluating next steps, taking it one day at a time.

And when this crisis is all over, many small businesses will already be gone and won’t be able to start over. That favourite local restaurant you used to go to on Friday nights might not be there. That coffee shop you used to linger at Sunday afternoons could be gone too.

Lucier contemplates what Toronto will look like if businesses don’t get the help they need and are forced to close.

“Neighbourhoods will be less interesting and less vibrant. Chain businesses will be the only ones around for a long time,” he said.