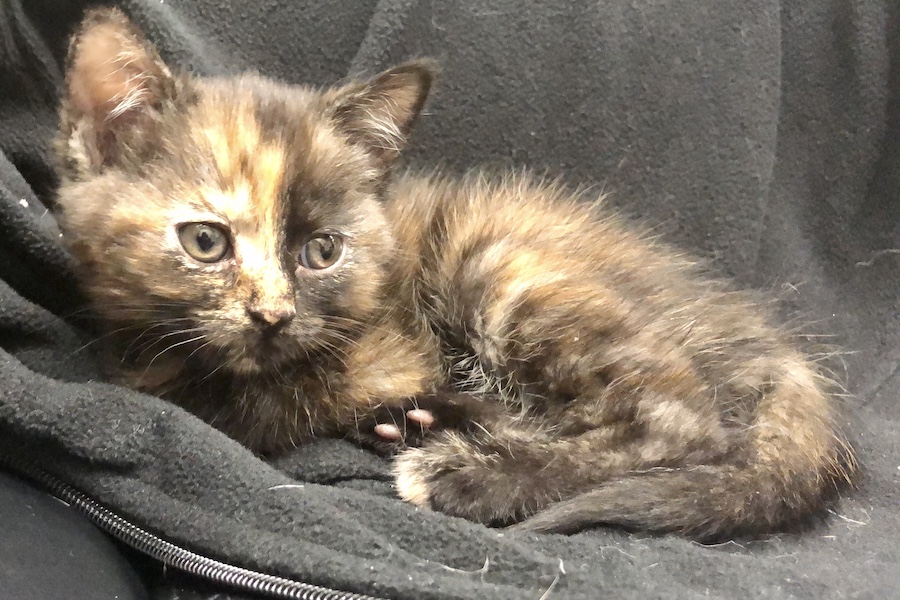 Dora the cat pooped for the first time after being born with no anus.

Dora, the cat that was born without an anus, took her first poop overnight on June 15. The playful kitten is currently under the care of Central Toronto Veterinary Referral Clinic, after undergoing surgery to create an opening for her stool and rebuild some of her intestines. The complicated surgery and care is paid through donations collected by Annex Cat Rescue, who are still raising funds for Dora’s follow-up treatments.

Dora, named after the cartoon explorer because she was so energetic and curious, was born to one of Annex Cat Rescue’s rescued fosters. They spay or neuter feral cats surviving on the streets to keep Toronto’s 100,000-plus street feline population under control and find homes for feral kittens or abandoned cats that can be domesticated with care.

At first, everything seemed normal because Dora was feeding from highly digestible mother’s milk, says Annex Cat Rescue’s foster program coordinator Jacqueline Chan. “In her first six weeks of life, there weren’t severe impacts from her not having an anus.”

But a week after Dora was introduced to kitten food, her foster care giver noticed her straining at the litter box and vomiting after eating. The vet at Roncy Village Veterinary Clinic who went to examine Dora for constipation on June 3 discovered that the kitten had no anus, which is an incredibly rare condition that no one involved had dealt with before. She was immediately turned over to specialists at Central Toronto Veterinary Referral Clinic who performed the emergency surgery the following day.

“Now it’s just a matter of getting her through this and getting everything that was backed up inside cleared out,” says Chan. “That’s why she is still at the emergency clinic. It’s not a straightforward process. But she is hopefully on the road towards recovery.”

Dora had a follow-up procedure to carefully remove some of the blockage in her system before she managed to pass stool overnight on June 15. She needs another 24 hours for monitoring following her first poop but Annex Cat Rescue says they are hopeful she will be back at her foster home tomorrow. Chan explains that they’ll still have to see how she heals up and what kind of control she has over going to the litter box.

“It is quite possible that she’ll never really be able to control it,” she says. “And that is something that we’ll have to obviously find a very special adopter for. Because it just makes it a little bit more challenging to have her in the house. But she is a wonderful, playful, cuddly, sweet little girl. And we know that there’s going to be someone out there that doesn’t mind having a bit of a special needs cat when she is this lovely and affectionate.”

Annex Cat Rescue is still collecting funds at canadahelps.org for Dora. Any remaining funds following her treatment will be used for other cats brought in off the street into the care of volunteers at Annex Cat Rescue.

Chan says the organization, which helps find street kittens a home, has seen adoptions rates go “off the charts” during the pandemic. But organizations like them, Toronto Animal Services and Toronto Humane Society have not been able to operate as regularly during the pandemic in terms of spaying and neutering the street cat population, which she worries could result in its own version of a baby boom.

“I worry that this year and next year there’s going to be an awful lot more kittens to deal with,” says Chan. “And I think we are seeing it in terms of how many kittens and how many pregnant cats we have had come in this spring.”

See more from Dora and Annex Cat Rescue in the video below.