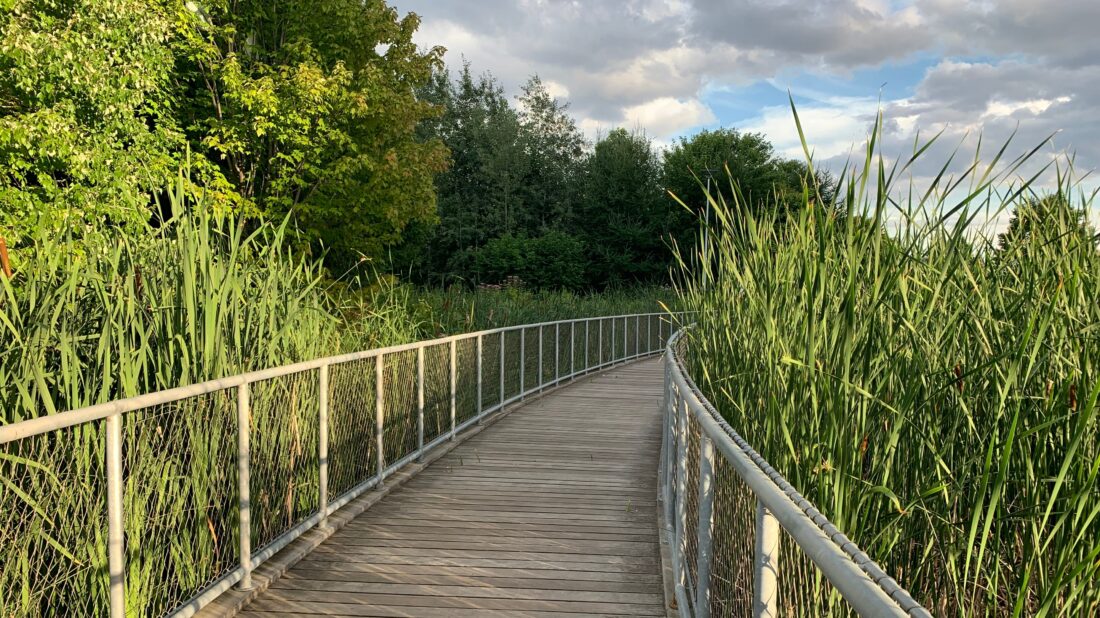 Plants and trees line a bridge in Corktown Common.

If you don’t want to let summer pass by without enjoying the nice weather, there’s nothing better than a walk or hike. It will clear your head, provide exercise and boost your spirits during this difficult time. In this series, I’m exploring some of the city’s parks and streets. This week’s walk: the park, playground and paths of Corktown Common, just next to the Don River.

I had no idea this charming patch of green existed until I went on Twitter and asked about people’s walks. I’d visited the Distillery District dozens of times, but didn’t realize this was less than 10 minutes east.

To be fair, the little oasis is kind of hidden. The common is at the intersection of Bayview and Front East. It’s the furthest south you can go on Bayview, and the furthest east on Front. It’s also just west of the Don River. One reason it may be less well known is because it’s not easily accessible by the south (because of the GO Transit/CN Don Yard) or east (because of the Don River and DVP). 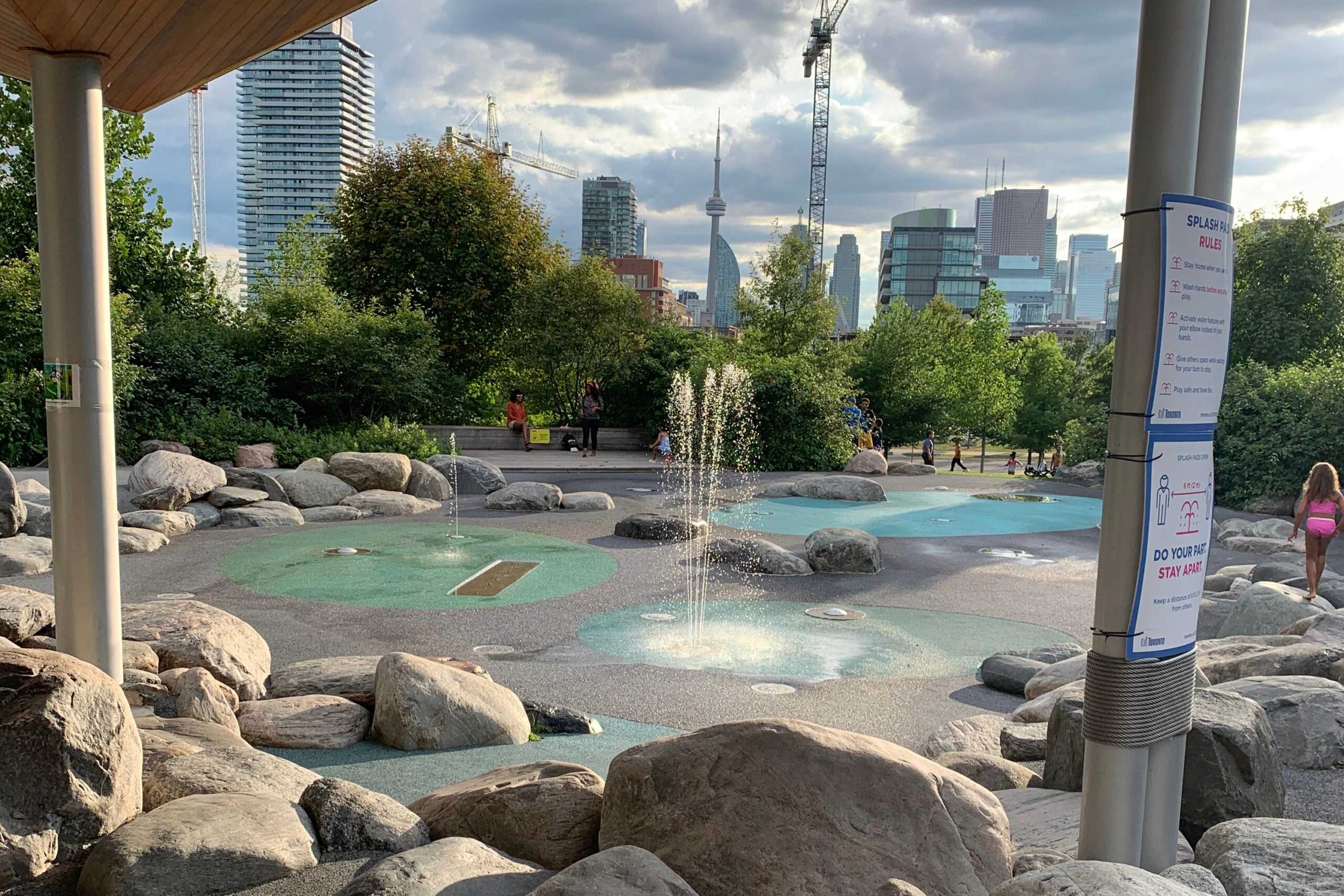 Kids will love the splash pad, which features a nice view of the skyline.

The relative obscurity gives the place a genuine neighbourhood feel. It’s somewhere for the community to chill and hang out. Dudes were tossing around a football on the multipurpose field. Friends were catching up on blankets on a grassy knoll. Lovers were strolling. Families were picnicking. Kids were splashing around in the splash pad.

The fact that Corktown Common is a bike-free zone gives a walk a more relaxed feel. Dogs need to be leashed in the park area. It felt used but not crowded.

A pavilion area features two drinking fountains and washrooms. There’s apparently a communal fire pit, but I didn’t spot it. 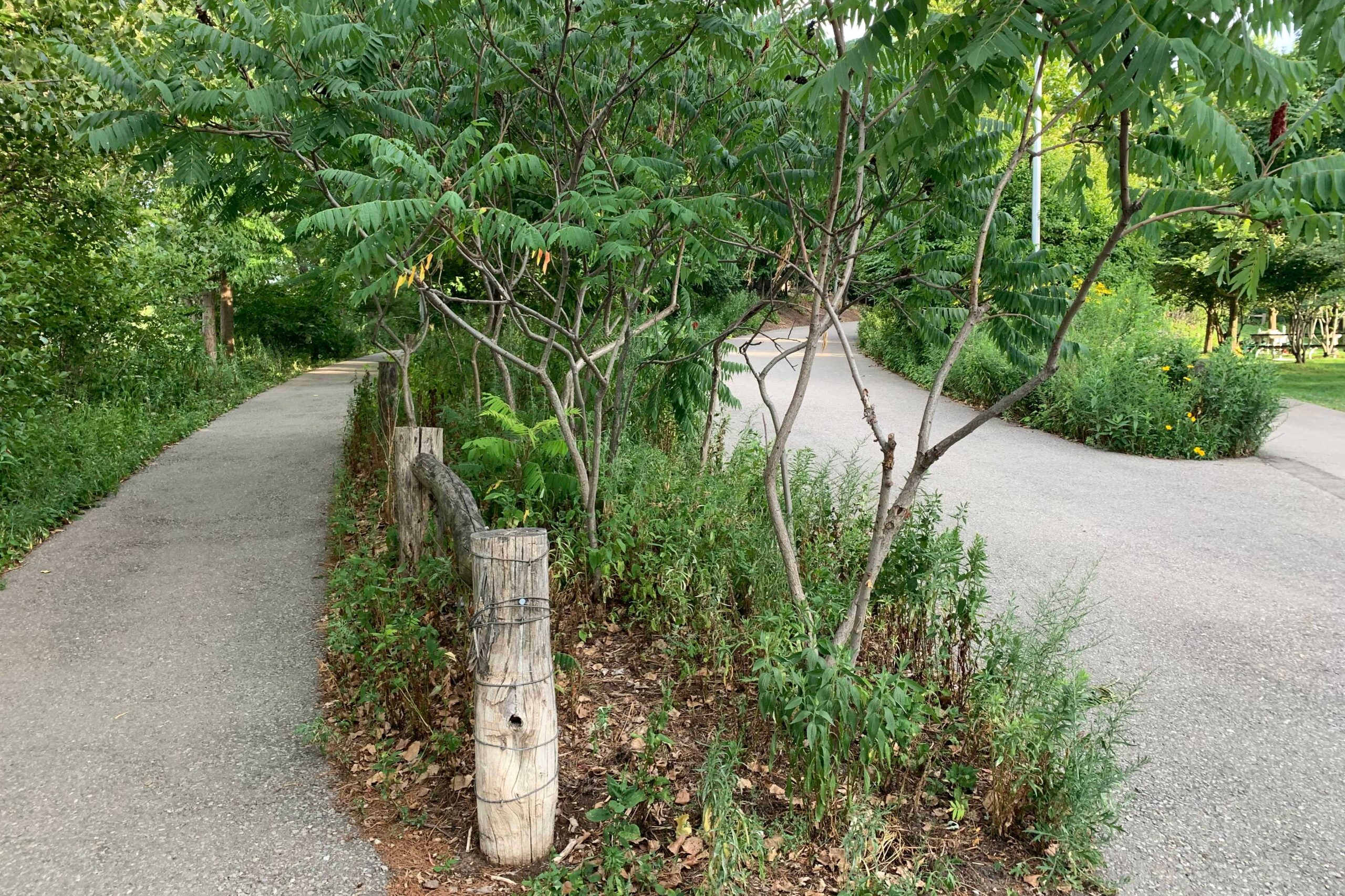 It’s easy to lose yourself among the winding pathways.

Kids will appreciate the splash pad. When I went, the day before the city’s phase 3 reopening, the playground area, including slides, was closed off. But a skateboard section seemed open and unused.

What makes the common so special, however, is the range of habitats. A few metres away from the main field is a marsh area, complete with lily pads, pond scum, frogs, birds and ducks. I spotted a few rabbits. One particular bridge, with its wild plants and reeds sprouting up from the water, will trick you into thinking you’re in the country. 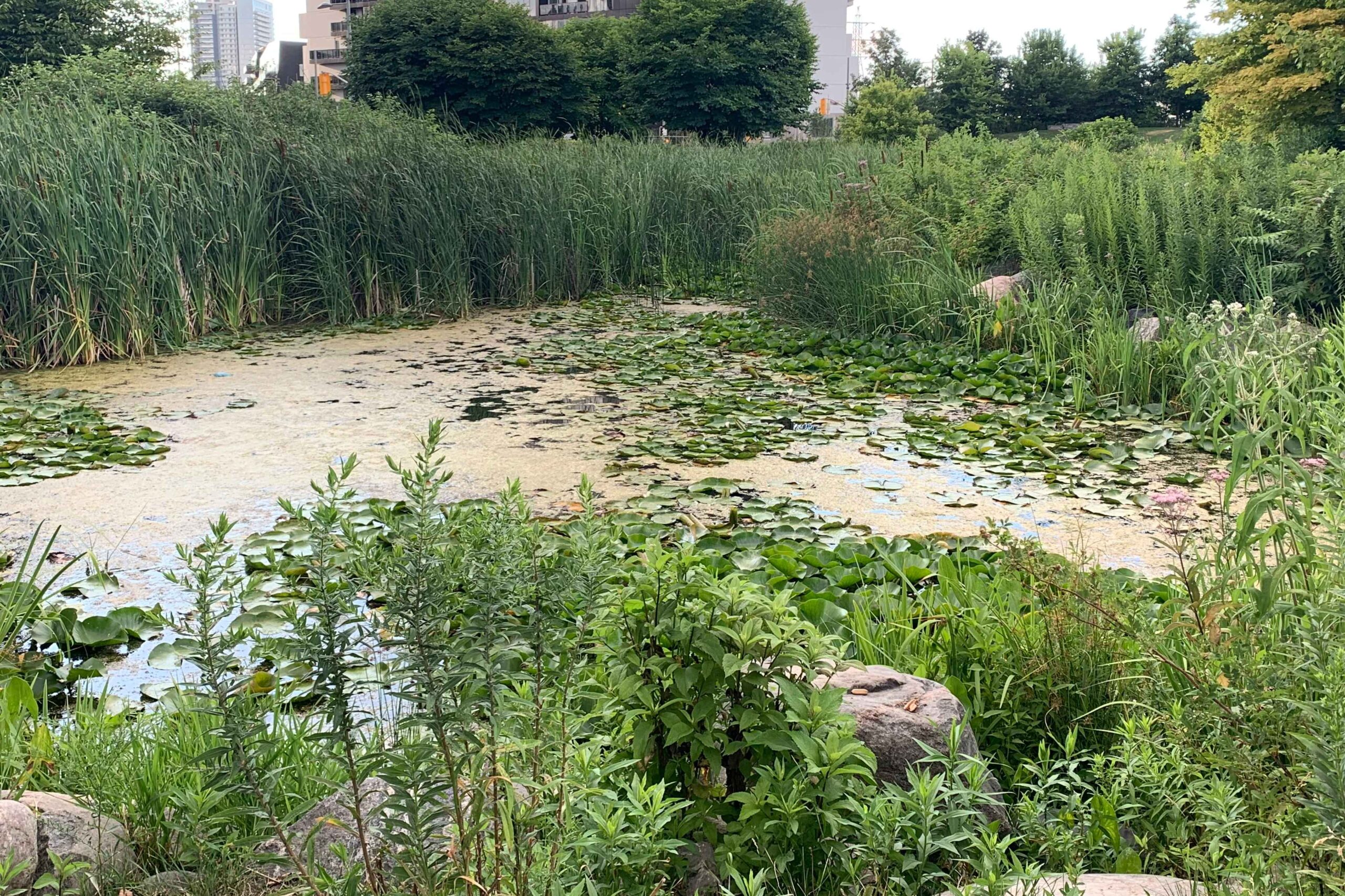 A cool fact: this formal industrial area features a closed-loop stormwater recycling system. All of its stormwater, as well as the water from the splash pad, is used for irrigation and to go into the marsh.

My favourite area was an elevated section of meandering paths, edged with trees, wildflowers and rocks. I saw a couple of walkers traversing these paths, which form a bit of a maze. More than once I thought, “Did I just walk this?” I wouldn’t be surprised if this area was a popular cruising spot in pre-COVID-19 times.

Surrounding the main section are lowland prairies for those seeking more open places to walk or run. There’s also a dog run area, but I don’t think it was available when I visited.

Corktown Common is a pleasant place to take a leisurely walk, breathe some fresh air or have a socially distanced chat with friends and neighbours. Children will like it because of the playground and splash pad. But it’s not exactly conducive to taking break-out-in-a-sweat power walks. If you’re looking for that, best to head east to the Don River Trail, which I hope to cover soon.

Listen to Glenn discuss his Pandemic Walks on a new episode of the NOW What podcast below: