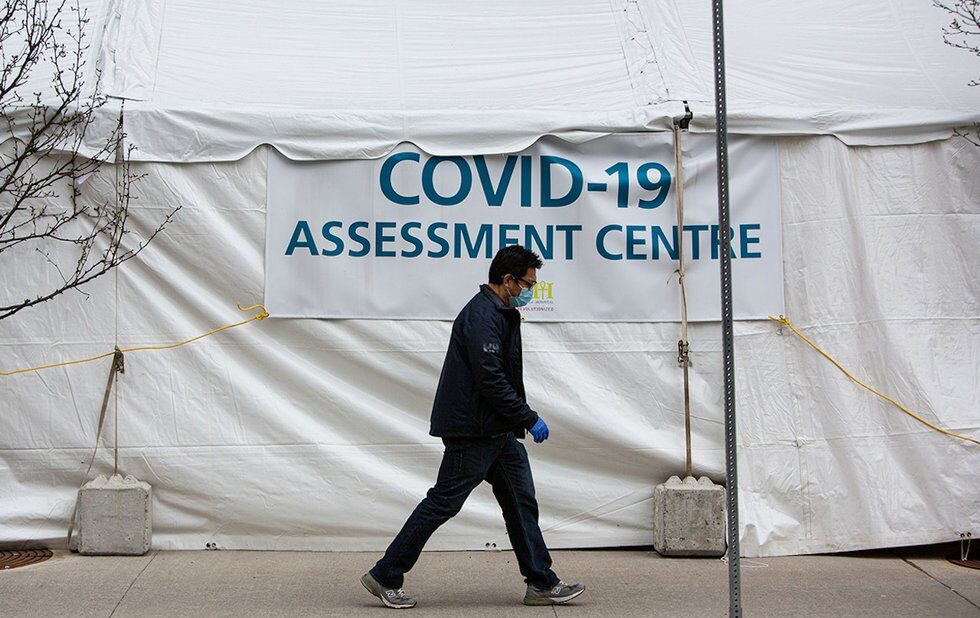 People wait outside a COVID-19 assessment centre at Bathurst and Dundas in Toronto.

Cressy detailed plans to collect the data in partnership with hospitals in a letter to board members.

“Public health data is one of the most important tools we have to combat COVID-19,” Cressy wrote in a tweet accompanying the letter. “We should be collecting as much information about COVID-19 as possible, including disaggregated race-based data, so we can better understand how this virus impacts different groups of people.

“Access to comprehensive ethno-racial data in Ontario is crucial for understand COVID-19 and its connection to systemic inequities,” he added. “Unfortunately, the province is not tracking COVID-19 data based on race or ethnicity when testing. In that absence, Toronto Public Health is partnering with hospitals and others to try to collect race-based and additional data to inform our response.”

Cressy’s letter states that Toronto Public Health has begun “a preliminary ecological analysis linking home address of COVID-19 cases” to census data for specific areas in the city “as a proxy for individual-level data.”

The goal is to determine if there are disparities on COVID-19 hospitalizations.

The data has been analyzed up to April 13 and no trends have emerged, he added. The data will be updated weekly in order to identify concerning trends.

TPH is exploring other partnerships to collect the data as well as the possibility of including race in the city’s newly launched pandemic data system, the Coronavirus Rapid Entry System.

The city is looking at partnering with the Toronto Centre Local Health Integration Network, which works with hospitals that collect some of this data, and the Institute for Clinical Evaluative Sciences.

The issue of race-based data during the crisis has been raised repeatedly at the provincial level after data collected in the United States revealed COVID-19 is disproportionately impacting Black people in that country, in terms of both mortality and infection rate.

Earlier this month, Chicago’s public health agency reported that Black residents accounted for 72 per cent of deaths from COVID-19 and 52 per cent of positive tests. African Americans comprise 30 per cent of the city’s population.In Ontario, nearly 200 public health groups have signed an open letter calling on the province to collect the data.

Michal Hay, executive director of Progress Toronto, one of the organizations that signed the  letter, called the move “very good for the health of our city.”

“Having this data is key to understanding the disparities in how COVID-19 is impacting communities, key to determining the best response by the city and, most importantly, key to ensuring Toronto’s plans for recovery build a much more equitable city that works to improve health for communities facing deep-seated health inequity,” she said in a statement to NOW.

At recent press conferences, both Ontario’s chief medical officer of health David Williams and premier Doug Ford have pushed back against calls to collect demographic data related to the pandemic.

“Right now we consider our main risk groups [to be] the elderly, those with other co-morbidities, as well as other health conditions that would reduce their immune status,” Williams said during the province’s daily press briefing on April 10. “Those are priorities to us, regardless of race, ethnicity or other backgrounds. They’re equally important to us.”

Hay called the province’s refusal “irresponsible” and “behind the times,” adding that “it exacerbates existing inequalities and puts lives at risk by limiting evidence-based responses to contain COVID-19.”

With files from Sadaf Ahsan